It’s been just about one year since DC Comics re-launched almost their entire line in an effort to freshen up their product. Aside from a few missteps, they’ve been relatively successful – bringing new light to a their staple franchises, such as Wonder Woman, Green Lantern and Batman, as well as delving into some more obscure characters, like Animal Man, Swamp Thing, and the Justice League: Dark characters.They even managed to make Aquaman look like a badass, a feat which speaks volumes on it’s own.

With a bunch of new followers and a kick-ass creative team, The New 52 has done a great job of paying homage to predecessors while still opening up a lot of new doors to go through. The Zero Issues will mark the end of Resurrection Man, Voodoo and Captain Atom, the last of which I was really into, initially, but became this entangled, spiritualistic vomit of a comic that I eventually stopped reading. More importantly, though, they serve as prologues to stories that foreshadow soon-to-be events or just stories that the writers wish they could tell, but don’t have the means for an entire six-issue arc.

Regardless, I’m very excited for many of the Zero Issues (complete listing found here) and these are the ones I will be looking at closely:

TALON #0 *NEW SERIES*
Written by SCOTT SNYDER and JAMES TYNION IV
Art and cover by GUILLEM MARCH
“Meet Calvin Rose, the only Talon ever to escape the grasp of the Court of Owls. This former assassin just wants to live a normal life…but that’s impossible, since he’s being hunted by his former masters!”

This series, I am especially excited for. The Court of Owls arc was one of the best Batman stories. Ever. The thing I struggled with most during the story was the conflict of these assassins, called Talons in the book, between their bred duty and their personal feelings. Good thing the Owls live past the pages of Batman.

Written by GEOFF JOHNS
Art and cover by GARY FRANK
“Billy Batson takes center stage in this issue as he unleashes the awesome power of Shazam in a special origin story! Also featuring the not-to-be-missed origin of Pandora and the next seeds of TRINITY WAR!”

Written by BRIAN AZZARELLO
Art and cover by CLIFF CHIANG
” A facet of the past is revealed – and a foe is introduced! How did Wonder Woman become a star pupil of Ares?”

The pairing of Wonder Woman and Greek Mythology has been one made on Olympus. I can’t wait to see how the fiery Wonder Woman catches the eye of the God of War. However, I’m still waiting on the real match-up between the bastards of Zeus, Kratos vs. Diana.

Earth 2 is DC’s blatant attempt for Robinson to say, “you know what, screw the origin stories from the Golden Age. I’m gonna make my own!” And, for that, I love the new series. I’m really excited to see how it all began, after it all tragically ended.

BATMAN, INCORPORATED #0
Written by GRANT MORRISON and CHRIS BURNHAM
Art and cover by CHRIS BURNHAM
“Batman has a war to fight, but first he must recruit an army to combat the menace of Leviathan. See how The Dark Knight assembled his lieutenants!”

I’ve been eagerly awaiting Batman, Inc. for some time now. With only a couple issues out, it’s hard to really judge where this series is going, but I love it thus far – as well as the original run pre-New 52. I trust really anything Batman that Grant Morrison does, and I’m excited to see the book shine new light on some of the recruits, namely Nightrunner, the French Muslim Batman.

BATMAN #0
Written by SCOTT SNYDER
Backup story written by SCOTT SNYDER and JAMES TYNION IV
Art by GREG CAPULLO and JONATHAN GLAPION
“Bruce Wayne has returned from his worldwide quest to take the law into his own hands! This issue reveals the early steps of building everything that surrounds Batman – the costume, the cave, the car, the gadgets!”

BATMAN AND ROBIN #0
Written by PETER J. TOMASI
Art and cover by PATRICK GLEASON and MICK GRAY
“Damian’s complicated relationship with his mother, Talia al Ghul, takes center stage. Bred to kill and not to care, this is the birth of an assassin!”

I’ve been waiting for DC to explore more of Damian’s darker side. Tomasi did a great job of it in the “Nobody” arc, but to actually get into the training and upbringing that made him what he has become is something that I feel has been sorely lacking in the DC Universe.

GREEN LANTERN #0
Written by GEOFF JOHNS
Art and cover by DOUG MAHNKE and CHRISTIAN ALAMY
“PROLOGUE TO THE THIRD ARMY! The introduction and origin of a surprising new Green Lantern!”

This whole “Trinity War/Army” thing sounds compelling, but let’s be honest. The reason for my interest is pretty superficial; An Arab Green Lantern with “courage” tattooed on his right arm in Arabic (possible future tattoo if he’s a worthy character). The only question that begs asking is “Why does he need a gun?” We’ll see where this goes, but I’m pretty excited for a new, diverse Lantern. 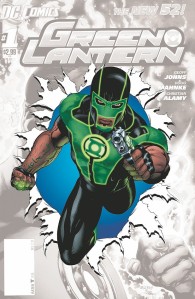 That about sums up the most awesome Zero Issues to come. More news on them once they’re released in September!