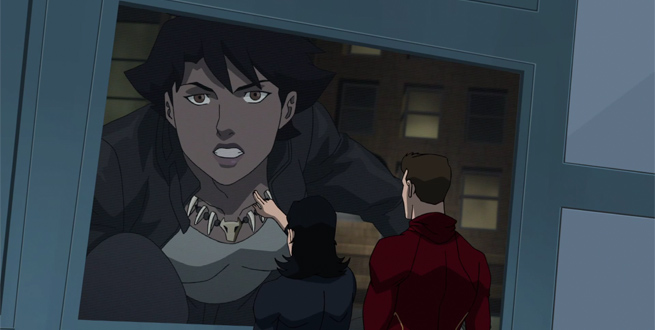 The first actual spin-off show of Arrow and The Flash is the animated series Vixen. The series will be on CW Seed, an online subsidiary of The CW.

Vixen is a DC Comics heroine who has been around since 1981, first appearing in Action Comics #521. She is DC’s first African hero, coming from the fictional African nation of Zambesi. Her family comes into possession of a totem (in this case a necklace) that gives the wearer the powers of the animal kingdom. Vixen has fought on the side of the Justice League and the Suicide Squad.

In the animated series, Vixen will be voiced by Megalyn Echikunwoke (CSI: Miami), and also appearing will be Stephen Amell as Arrow, Grant Gusin as The Flash, Emily Bett Rickards as Felicity, and Carlos Valdes as Cisco.

– Vixen’s quip about “that’s the 52 million dollar question.” Gotta have that 52 reference somewhere!
– Cisco gets to name her. But of course!