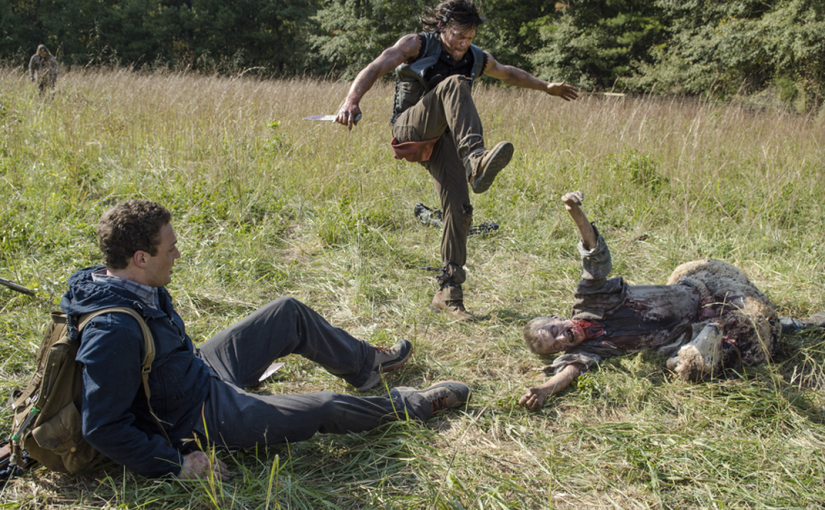 Carol, Harbinger of Nightmares: Honestly, she could have just said to me that I would be outside the wall and tied to a tree. I would have said, “Hey, Lady, you’re secret is safe with me. Now can I have the whole batch of cookies?!” I would have also peed and wept. But she kept going… and going. She is the Energizer Bunny of causing nightmares for curious little boys who might be a little too attached to their mommies. And I like it.

Daryl-centric episode: While Rick and Carol had their fair share of screen time, I really thought this episode was all about Daryl. The scenes with Daryl and Aaron outside the walls were particularly profound. I loved the line, “The longer they’re out there, the more they become what they really are.” He was referring to Buttons, the horse (RIP), but I really liked how much that line reflects on Daryl and our group. Daryl tried to get the horse to come to him and said, “You used to be somebody’s now you’re just yours.”

While the comparisons to Daryl and the wild horse were uncanny, what is even more uncanny is the amount of women in America who are now fantasizing Daryl the Cowboy… or Horse Whisperer? I’m not sure. Anyhow, Daryl being the other recruiter seems like a good fit for him. He can be out there without having to be out there. The problem with the horse is that he always ran – when he stopped running, that’s when he bit the dust. Daryl can’t do that so running via recruiting is a great option. Also, his table manners are great.

Aaron and Daryl: They work really well together. As long as all goes well, it will be cool to see the “outsiders” of Alexandria working outside the walls to kill the walkers and save the people. Aaron also seems to be one of the few people to get through to Daryl and his sensitive side. The moment when Aaron told Daryl that he can tell the difference between the good guys and the bad guys was a pivotal one for our biker redneck hero.

The Scarlet Letter: While Jessie’s husband has a red “A” stamped on his hand, it seems more significant that Rick gets the stamp on his had from her son. At the end of the episode they flash their “A”s at each other with big smiles, and then Rick goes to the wall and stares at his hand while listening to a walker. Jessie and Rick deserve the scarlet A for Adulterer, but neither of them is your regular Hester Prynne. I just like the imagery here.

Sasha: Sasha had some pretty important scenes this episode, too. She’s going through some serious PTSD. Which honestly, it seems a little weird that more of our group isn’t going through this. Anyhow, Sasha takes some random family’s pictures out and practices shooting, freaks out at the party about her favorite meal, and volunteers to stay in the clock tower as a lookout. After everything this girl has been through, I don’t blame her. I also love that they are making her the “Andrea” of the group, since this is the route Andrea takes (Because she isn’t dead in the comics. See the Easter Eggs for more!).

Dub-ya: The walker Carol killed with the “W” on it’s forehead was a nice way of continuing that mystery without making it overkill. I like that I am guessing on this one.

No Father Gabriel or Eugene or Tara: It’s not like the are really integral characters, or that I’m too hurt by it, but can you imagine Eugene at that dinner party? Because it would be pretty funny.

Michonne and Abraham: Ok, the whole conversation was pretty good on the surface. Michonne and her sword are an amazing partnership, and Abraham talks about that extensively. But the whole thing seemed a bit.. sexual? I don’t know, but there was chemistry there, and I don’t approve.

Ricktatorship: Rick Grimes is the bad guy, people. I don’t care how sexy Andrew Lincoln’s scruff is, or how sexy his come hither look to Jessie was, Rick is bad! He has a stolen gun on him, which he is semi-flashing around town by always holding onto it. And he grabbed for it when he saw Pete and Jessie walking away. You can’t just kill a guy to get some punanny, Rick. That is wrong so wrong! Also, him saying the Alexandria community is lucky now that they have him…ew.

Deanna: I don’t know why, I just don’t like her. Maybe it’s because her tiny face always looks too squinty. But also because she isn’t that smart. How is it that she doesn’t understand why Sasha isn’t dealing well in this situation? It totally makes sense, so for her to question it is silly. She seems to be a big picture person, which is always needed. But for her to think in terms of industry and commerce is a little too far in the future. Additionally, her “return” for Sasha being the lookout is to come to her party because then “she’ll see.” She’ll see what? And what kind of return favor is that? I just don’t trust this.

The Sword: When Michonne finally starts feeling comfortable, she does hang her sword above the fireplace in her home in Alexandria. She also talks to her katana.

THIS IS WHAT YOU WORRY ABOUT?: This scene was very similar to one is Issue 72 where instead of Sasha (because she doesn’t exist in the comics) Michonne freaks out on a group of ladies in Alexandria.

Sasha the Sharpshooter: Andrea and Sasha have a lot in common. They both lost their siblings and lovers in the apocalypse. In fact Bob was taken out the same way Dale was in the comics. And since Dale was Andrea’s much older boyfriend in the comic, this makes sense. Additionally, Andrea and Sasha are pretty damn good shots. Sense we don’t have Andrea in the show anymore, I really am digging this Sasha as her replacement thing.

Spencer: Spencer, Deanna’s son, is a “lookout” in the tower. He technically isn’t assigned there, but now that Sasha is, he will be. In the comics, he is the charismatic son of the politician Douglas Monroe. He also likes Andrea and gets a little pushy with her, but Andrea lets him down gently, a lot. It looks like the same relationship is already forming with Sasha, aka the New Andrea.

Pete and Jessie’s Relationship: Pete is pretty curt with Jessie about going to get the drinks at the party. There is some tension going on there, and this will continue, as it does in the comics. And now I shall stop for fear of spoilers.

Tobin: Tobin is the man who offers to teach Carol how to shoot a gun. In the comics, Tobin is an Alexandria community member. He is part of the construction crew and cares more about himself than others, as he is the cause of death of several people when he is too worried about his own hide.

Noah: While Noah isn’t in the comics, Glenn and Maggie seem to take him on as a son/ parent relationship. Since Carol is dead in the books and Sophia is alive, Maggie and Glenn take Sophia as their daughter. Maybe Noah is her replacement?

The Wolves: I don’t know who the wolves are, but there are too many references for this not to be figured out THIS SEASON. I capitalize this because I can’t be left wondering who The Wolves are from March to October. I think the walkers with the “W”s carved in their heads are being hunted by Enid’s group, who was mysteriously not in this ep.

Other Stuff and Things:

-I want to cut everything with a katana now. If Michonne can cut her tassles of her corset jacket, so can I.
-Also, Michonne telling Deanna that people will listen to her because she is in a windbreaker is pretty damn funny.
-Maggie looks totally different, and now she works in “government” with Deanna. I hope this doesn’t make her weak.
-Deanna’s husband Reg is a total dweeb.
-Mrs. Neudermeyer really knows her priorities.
-Rick looks weird in a white shirt. Sexy weird. And yes, I know the white is representative of a clean image.
-Carl laughing is weird, too.

Hush Comics gives “Forget” a B+ for making Daryl even better than he already was, for Carol making me pee in fear, but for Rick being a little too macho.

All images belong to AMC and are credited to Gene Page.