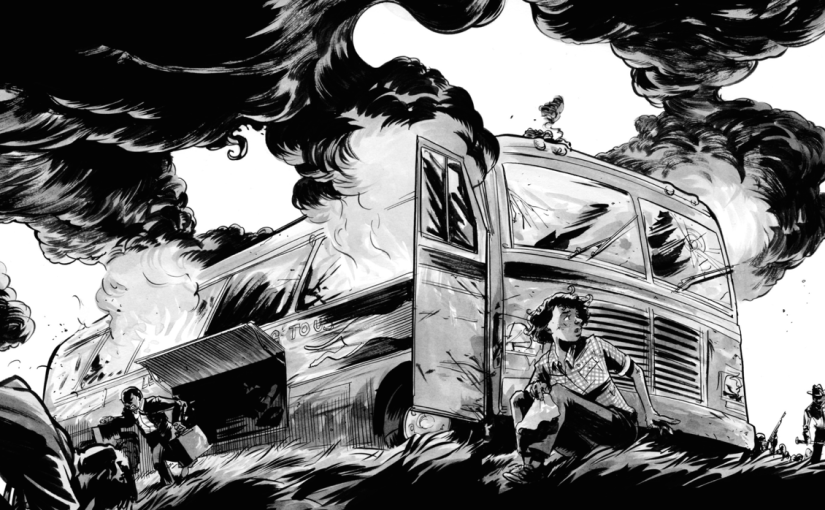 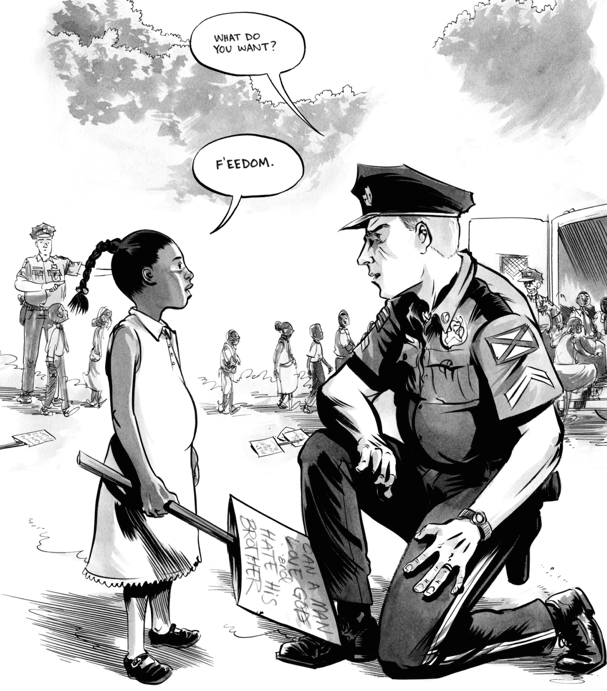 Inspired by the use of comic books to send across messages that couldn’t be transcribed in the written or oral form of communication, John Lewis, with the help of Top Shelf Productions, created March: Book One, an autobiography and first-person perspective of other Civil Rights stories. After laying down much of the framework of who John Lewis was, where he came from and what he believed in, we are thrown right into the deep end as this volume takes us through the evolution of the Movement, and journeys through the history of the Freedom Riders. 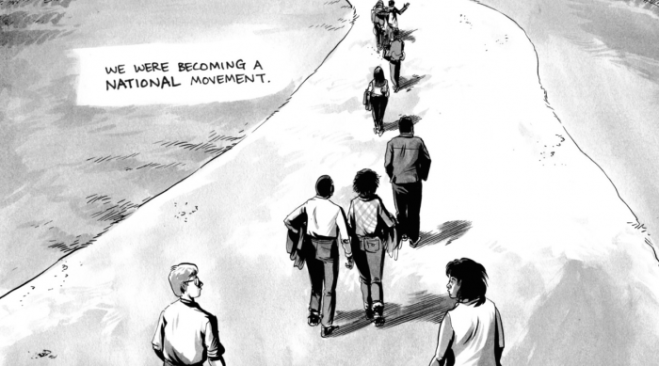 Book Two is a noticeable improvement over the first book, where all three creators really got their feet yet. Whether it has to do with Lewis’ personal growth or the nature of the Civil Rights Movement at the time of the events, there is a much more adult tone taken in Book Two. It wasn’t just the increasingly violent reactions from policemen and citizens towards the Freedom Riders, well-meaning white citizens who came to their defense, and dozens of black children.  No, there was a constant looming threat of defamation, imprisonment and often times death that each of them had to be constantly aware for. It was a movement so formidable that even Dr. Martin Luthor King, Jr. was hesitant to go on it – or so the book implies. These accounts are directly from John Lewis’ memory of first-hands, and I’ll be damned if I’m the one to tell him that he got it wrong. 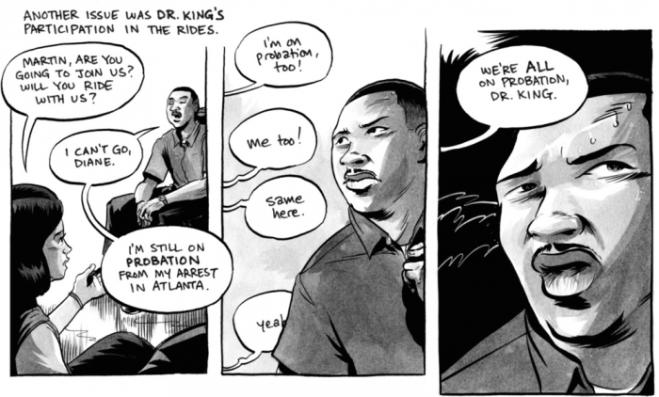 Where the books excels is that it isn’t just a collection of stories from Senator John Lewis’ mouth. No, this is a calculated story with purpose. Scenes from the book are not only pieced together to form another successful chapter in his life, and that of the Civil Rights Movement. They are done so with not just the rationalization of a fiery young man, but the clarity of a wise man reflecting on his years as a freedom fighter. It’s refreshing to arrive at the conclusion that even though the courage that it took to actually follow through as a Freedom Rider was monumental, the entire movement was sparked by the simple yet fierce desire to make the situation better. 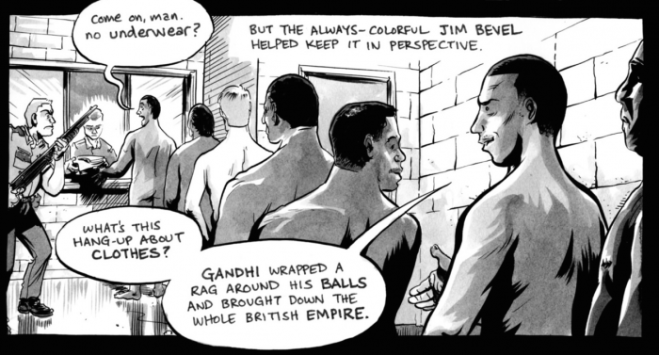 Technically-speaking, there are several improvements to this volume over the first installment. While the art was satisfactory in Book One, Nate Powell’s pencils are eye-catching and often shockingly-vivid. There were several scenes that convey the brutality and injustice that Lewis saw first-hand. There were other improvements, too, notably how well Powell and co-writer Aydin took advantage of the freedom granted in creating a graphic novel, really using unique ways to display onomatopoeic words and show the tone of a phrase by lettering it in a specific way. It’s a quite interesting way to communicate with readers – one I hope will catch on with other creators. 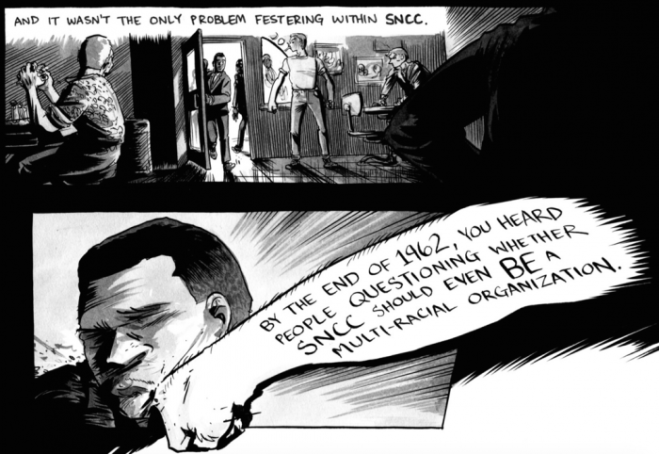 March: Book Two expertly brings the book to a close by chronicling Lewis’ attendance at Barack Obama’s inauguration in DC, the same city at which Lewis (and several other keynotes, like MLK) marched on Washington DC to give some of the most memorable speeches of the whole Movement. This scene illustrates that while progress towards equality and civil liberty has been astronomical, there is still plenty of work to do. That is why the Denver Freedom Riders have formed. The merging of goals between the generations is something that John Lewis speaks specifically about when describing his time working with senior activists. The capabilities of social media have made us all activists, but nothing really gets done unless the movement starts at the ground floor. I spoke with Hush writer Jumoke about the movement that’s gaining momentum in the Mile High City. 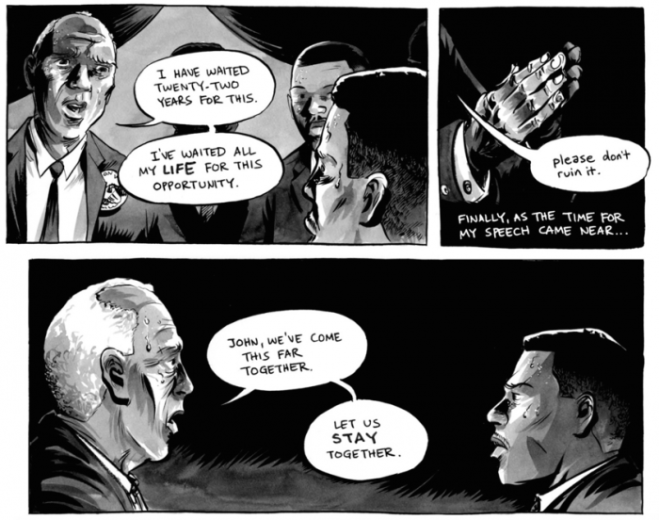 The legacy that connects our generations is a simple one; a group of people of diverse background looked up at something going in the nation and decided that it wasn’t enough for them to simply stay at home. Some of us went as individuals (Anthony [Grimes] and myself), many of us went in later groups, but most of the core group went down to Ferguson during the height of the unrest. As we came back, we realized that there was some work that needed to be done and continued right here from Denver.

“We believe in the inherent dignity of human life. We believe no one is more aware of that inherent worth than those that society has attempted to dehumanize, marginalize and oppress.”

Those two sentences, the first two in the Denver Freedom Rider’s mission statement, could be included in almost every social justice movement creed of the last 100 years. The same fights for human dignity are being waged – only the actors and battlefields have changed. For some, that may be disheartening, but, for me, that actually gives me strength and courage. Although it seems there will always be injustice, oppression, and battles to fight, I take heart in the fact that there will also always be those who ride for freedom.

For those looking to get involved in the community through the Denver Freedom Riders, here is a link to their Facebook page with more details.

I hope you enjoyed the review. I’d just like to point out that none of the pictures in this work are mine, and should all be credited to the good folks at Top Shelf Productions. You can find March: Book Two on their website, here. 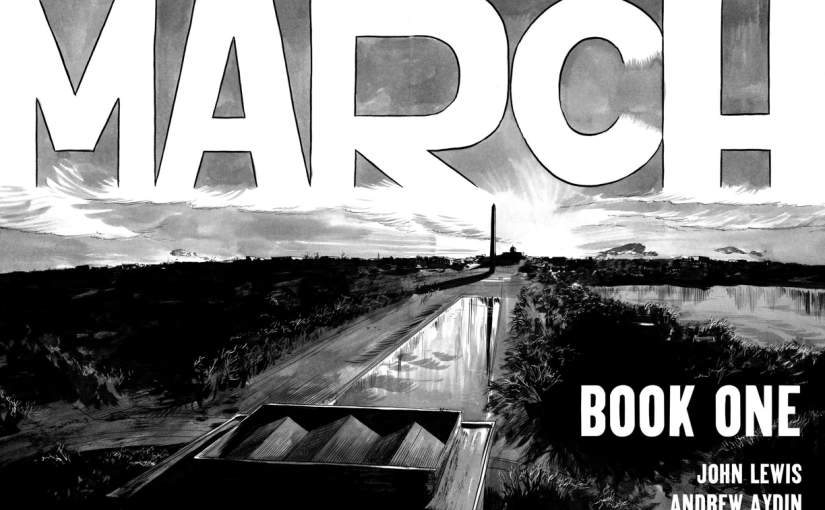 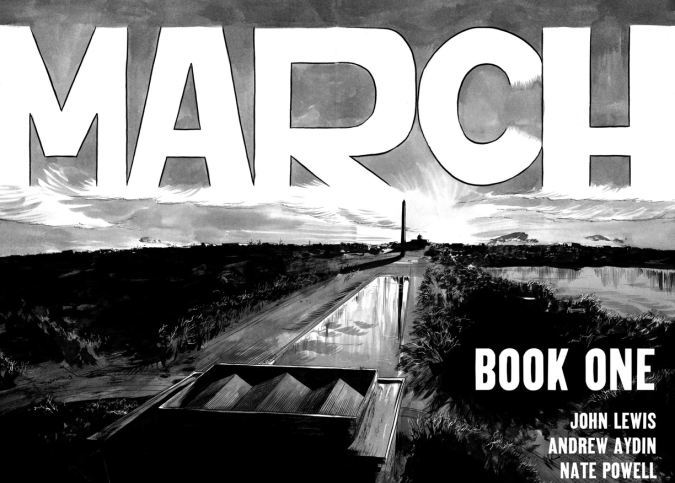 A lot of people may not recognize it, but the graphic novel medium, when used correctly, can become a form of literature more descriptive than a novel or moving than the art. In March: Book One, the first of a trilogy leading up the March on Washington in 1963, we are fortunate enough to get that experience. What impressed me so much about March is that it was written by comic book novices. And who would have thought that one of the most powerful comic books (graphic novel, technically, but you get the jist) in 2013 was written by a United Stated Congressman?

Of course, John Lewis may be a comic book novice, but he’s no stranger to the Civil Rights Movement. Making up one of the “Big Six” in the Movement (a list that consisted of Dr. Martin Luther King Jr. and four others that each contributed to the Movement), John Lewis is the only one living. He is the Democratic Representative of Georgia and has quite the colorful tale to tell in this black and white autobiography.

So where do we start on our march to freedom? Well, we start at the chicken farm. Lewis begins his story of non-violence and racial tension by explaining his love for chickens. It came off as odd and unexpected, but ultimately won me over as an honest sentiment that foreshadows his love for all livings things – as well as offering some very adorable panels. The way he wanted to save all the chickens, make sure they all got fair treatment, named them and even tried to baptize them was a true ode to childish innocence and naivety.

March reads more like a memoir, taking breaks to revisit the current time to move the story along. It’s a method that works for the first few chapters, but ultimately becomes a little too much like a cliché television special for my taste. However, the way the story is presented, you can’t help but get sucked into the time. One of my favorite anecdotes in March is when he snuck off in the morning to run and catch the bus to go to school. The way he deliberately disobeys his father to go to school instead of help at home was a choice made with a gravity that a lot of younger readers can’t really grasp. Lewis’ trip up North with his uncle Otis was also eye-opening to just how different the two regions were in the 1950s. 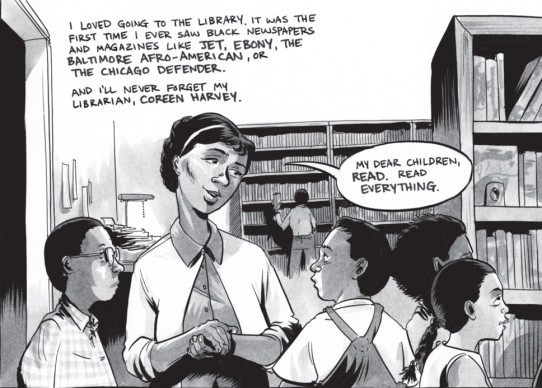 Much of the visualization can be credited to the fine art of Nate Powell who captures the essence of the moment fittingly for each scene. The shading is perfect, and there is incredible detail when warranted. Even the way that onomatopoetic words are displayed and lettered add to the ambience of the moment.

The story really starts to kick into high gear when Lewis goes to college, and joins a Non-Violence group preparing themselves for marches and sit-ins by testing each others’ tolerance levels. It’s an amazing part of the Movement that I had never even considered previous to reading March. If you’ve studied African-American History, you know that sit-ins were an integral part of the Civil Rights Movement – but these people, most of which were courageous young adults, literally took turns berating and humiliating each other to see if their resolve for non-violence was strong enough. It’s unreal to imagine college kids banding together to do something like that today, and makes me appreciate every liberty I have.

Overall, March bridges a gap in perspective of the Civil Rights Movement that has formed between writing and film, with great recounts from Lewis that is complemented by the beautiful simplicity of Powell’s art. It falls a bit short in the sense that it doesn’t exactly have a clear direction, and the partitioning can seem a bit choppy with a lack of transitions. Luckily, Lewis’ story is so captivating and earnest that it pretty much writes itself. In the grand scheme of the book, those shortcomings are more like rough edges around an otherwise great read. It’s the best (albeit maybe the only) graphic novel portraying Black History I’ve read, and would recommend it to anybody who would like a different perspective of the Movement. 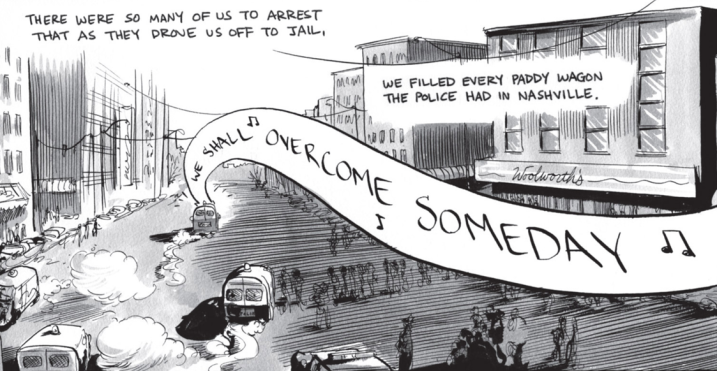 I hope you enjoyed the review. I’d just like to point out that none of the pictures in this work are mine, and should all be credited to the good folks at Top Shelf Productions.