All the symbolism: Holy symbolism! This episode was fraught with it.

Maggie’s Grief: When Maggie opens the trunk and sees the walker who resembles Beth, she shuts it after contemplating how this person was even kidnapped. She then says to Glenn, “I shut it and it’s still in there.” This was so profound, because no matter what Maggie does, the reality of her situation is still there. This episode was focused greatly on grief and Maggie’s was the most interesting to go through. 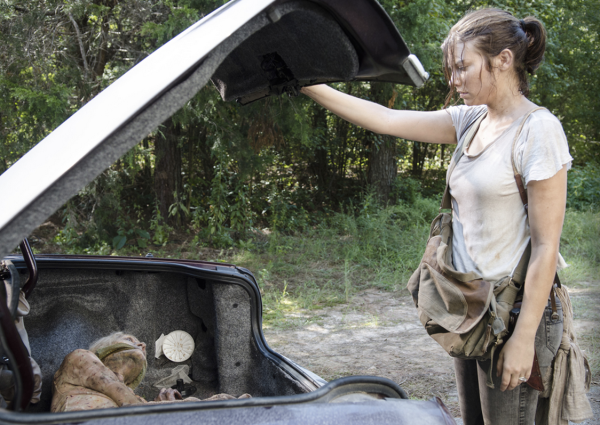 Daryl’s Grief: Daryl grieves a lot in his own way, too. In a lot of ways he is reverting to his old habits. He wants to be alone, he wants to smoke, and he wants to self harm. Despite this, he knows that he should stick with the group and he has a lot to offer them. He saved Rick from getting bit, and he showed the whole group to the barn.

Sasha’s Grief: As Sasha deals with her grief over the death of her brother, she becomes very angry. This is in true fashion to the character since we met her. Her anger did cause a lot of danger for the group, but she was also the only one callous enough to tell Noah that if he thinks he won’t make it, he won’t. She also killed the wild pack of dogs when it needed to be done. RIP Duke. 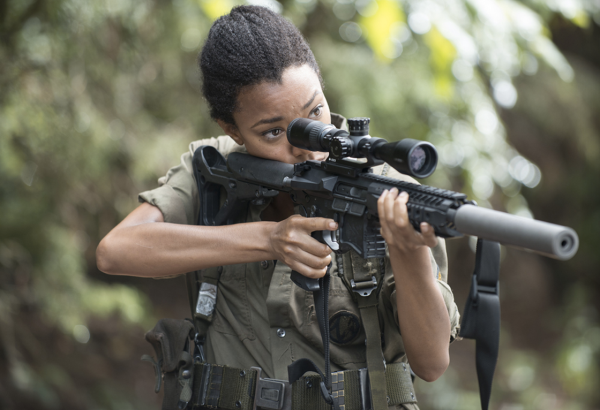 Hope: Even though Rick’s speech could be thought of as a downer, it was also very uplifting. Rick talked about his grandfather pretending to be dead throughout the war, and when it was over, he was suddenly alive. Michonne talks about how this isn’t the world. Maggie talks about how this was just the dark part. And Carol tells Maggie that some people can’t bring themselves to shoot themselves- none of them have. While all of this was dampened with grief, the major theme of the episode, it was slightly uplifting for all of them to believe in a world where the walkers don’t exist.

Beth’s Legacy: When Daryl runs away from the group, Carol acknowledges Daryl’s love for her. She gives Daryl Beth’s knife and tells him that he needs to deal with his feelings. Later on, Daryl tells Maggie that Beth was strong, even though she didn’t know it. The whole thing proved that as time wears on, the death of people in our group makes a bigger impact.

Abraham lays down some truth: Abraham may be wallowing in the bottom of the bottle, but he tells Sasha that her anger is going to get them killed before his drinking will. Truth.

Dead Siblings Club: Even though it is really, really, like really sad, Maggie and Sasha have a bond now. It is good for both women to have someone who understands the other one.

Tai Chi Zombie Killin’: Ok, they weren’t actually killing the walkers, but using their body weight to throw the walkers down the hill was pretty brilliant. No need to exert themselves.

Loss of resources: It was nice to see the other aspect of possibly dying in the apocalypse: depletion of resources is a real threat. Seeing the dead frogs and the dried up stream was a jolt of reality.

Sasha and Michonne have beef: I feel sad that the two black women on the show have issues with each other. I also feel sad that Sasha is so angry she is putting the whole group in danger.

Slow Pacing: While an episode light in dialogue is a nice change, and proved the acting is stellar this season, the pacing was very slow. This was not the whirlwind we had last week.

We are The Walking Dead: Rick says this infamous line in issue #24 in the comic book series. However, the context at that point was because the group was ready to oust him as their leader. The use of this line for this episode, to talk about his grandfather in WWII felt more appropriate.

Aaron: Aaron, the stranger danger dude at the end, is a scout for the Alexandria Compound. This happens to be the only good thing that ever happens to the group. It remains to be seen if this is what will happen in the show.

The Alexandria Compound is still far away: Despite the arrival of Aaron, assuming he is from the Alexandria Compound, it looks like the group won’t be getting there soon. Their trust for outsiders is at an all time low. Aaron and his group may have a lot of proving to do before Rick takes his people to the safe haven.

Hush Comics gives “Them” a B+ for great use of symbolism and the quiet moments to show and not tell, but for giving us slow pacing.

All images belong to AMC.