The Anti-Wells: I like the addition of the Pied Piper as a counterpart to Harrison Wells. He’s the only one as smart as Wells and the only one that understands the full consequences of the particle accelerator. And he knows all the secrets. Also Andy Mientus portrays the character very well.

Joe looks deeper: It’s good to see that one of the characters doesn’t trust Harrison with unlimited power. After everything that has happened surrounding Wells, it’s hard to understand why they aren’t more suspicious of him. It seems Barry always just brushes off the circumstances every time something new comes up.

Cisco learns not to trust everyone: For the majority of the show Cisco has come off as a cheerleader for Wells. He always seems to blindly follow him and see things with rose tinted glasses. It’s about time that we see a little growth in Cisco with a better understanding of who Wells is.

Really anticlimactic fights: I enjoyed the addition of the Pied Piper as a whole character but having someone who can run faster than the speed of sound fight someone whose weapon is sound leads to really boring encounters. Removing one of the fight scenes and a little more creative writing would have served better to the story than what was essentially the same exact fight twice in one episode.

Dr. Wells shows no evidence of super speed: Other than the actual bursts of speed we see, there are no other signs of his ability. Unlike Barry, Dr. Wells doesn’t seem to need to take in the calories that Barry does to keep himself going. You would think for someone who is just learning how to handle this ability, he’d have to have a supply of snacks at all times. His team would obviously notice all the junk food wrappers hanging around. It’s just an inconsistency that bothers me. 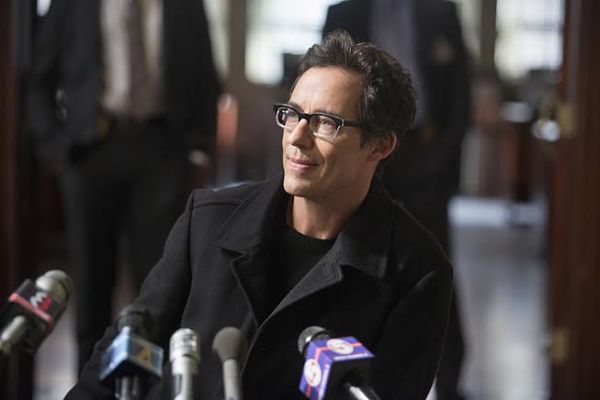 The big reveal didn’t matter: Harrison comes clean and admits to the entirety of Central City that he knew the particle accelerator could be dangerous to actually run. But for the viewers, this comes as no surprise. Presumably, Wells has had his digital crystal ball for some time, so we know that he knew what would happen when he started his meta-human making machine.

Why would you do that?!: This isn’t so much a con as it is a slight gripe. Why on Earth would you ever go out of your way to fix the bad guy’s weapon? It could literally shake you to pieces but yeah let’s go ahead make sure it’s in tip top condition. facepalm

Iris gets a real job: It’s nice to see that Iris is now employed by the Central City Picture News. She’s the little reporter who… I don’t care. Sorry Iris, it’s true.

Harrison Wells must have received a message from Oliver Queen: In what I’m sure was a nod to Arrow, Harrison publicly admits that he “failed this city”.

The Royal Flush Gang: So the gang spans more than just Starling City. You might best know them as the guys Max Lord (Booster Gold) paid off to take a fall so he’d get noticed by the Justice League International.

Cisco’s T-Shirt: Cisco feels like a character there to make nerds feel good. His shirt in the flashbacks “Stay Calm and Han Shot First” is another friendly reminder of that.

Wells’ reveal: He’s now being investigated by Joe and using short bursts of super speed at his leisure. It’s just a matter of time before everyone knows what’s going on. With his fancy chest claw slowly absorbing the power that Barry puts out, he’s working his way to probably be Professor Zoom. Hell, he’s already a doctor. With the ability to see through time with his handy computer lady, it’s not too much of a jump to think Wells will soon have the speed he’s looking for and be able to travel back in time to set in motion Barry becoming The Flash by murdering his mother. The other option would be that he empowers the suit and gives it to Eddie to have him do it, which would be a little more closely tied to the comics.

Hush Comics gives “The Sound and the Fury” a C+. It was one of the weaker episodes so far in the series, but it did open up some more doors for thought.

All images belong to The CW and DC Entertainment.  They are credited to Diyah Pera and Katie Yu.