Gorilla Grodd is in the house, you guys! We’ve been waiting for this initial showdown ever since the pilot aired. Eobard Thawne continues his descent from the alias of Harrison Wells, while Caitlin and Cisco learn how to function without a mentor. All the while, Iris learns how to make an episode all about her.

Alternate narrative: Like last week’s Arrow, The Flash begins with a different introduction of our hero. This time, it’s Iris who gives the nifty little spiel. It works really well given the circumstances, and it’s just about the only positive thing Iris brings to the entire episode.

Cisco and Caitlin at play: With Wells out of the picture, and no drama to distract them from each other, these genius scientists are a joy to watch interact with each other. No looming bad guy scientist to tell them their jokes are stupid or dampen the mood means Caitlin and Cisco’s personalities can run free. Wells’ absence (and lack of pointers) also means that Cisco will have to be more resourceful with his gadgetry. Remember, the first rule of Mechanical Engineering: never waste good tech.

The movie references: Cisco is usually on point with his film references during each episode, but this was an All-Star performance right here. From Jurassic Park to King Kong, he hits it on the nose each time. It might have come off as excessive to a lot of viewers, but it was the nice, nerdy supplement to all the mush going on with Iris. Cisco is a nerd’s nerd, and we all love him for it.

Good Grodd almighty: Grodd is terrifying. He’s completely CGI’ed, which was to be expected, but he was used sparingly enough that if you weren’t staring him in the face, you were constantly looking around to see where he could be. I loved the failed sonic punch and the futile efforts to punch the Grodd. It made him a believable formidable opponent – and a problem that won’t go away for a while. Also interesting, we know that Grodd loves Wells, but he’s not an outright bad guy, sort of like Koba was in the first Planet of the Apes. You have a certain sympathy for him, and it doesn’t make the “heroes” any more heroic by encroaching on him.

Wells is… mean: I know the facade is up, but jumping Jesus, he is so mean! He tears Eddie’s self-esteem down to shreds, and caps it off with the whole “oh yeah, and Iris doesn’t even love you” thing. I personally love that Wells/Eobard Thawne is becoming the egotistical a-hole that we want the Reverse-Flash to be, and Tom Cavanagh is portraying him very well. Eddie is just a nice guy, and I’m curious how his psyche will change after being caged up by this mad man. 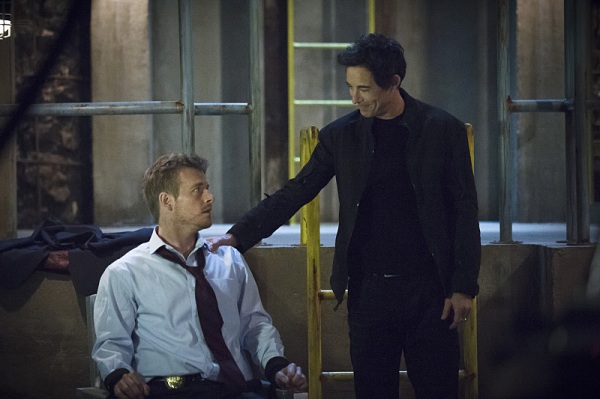 Iris: She’s one of the worst characters on TV today. To me, she’s Season 1 of Arrow Laurel. She’s not quite Gotham‘s Barbara Keane, but she’s on the same totem pole of badly-written characters whose reactions are full of narcissism and bad timing. Unfortunately, a majority of this otherwise solid episode is spent with Barry pandering to her emotional needs. It’s so frustrating to watch a show revolving around a relationship I hope never happens. Things could change, and they obviously will if we’re ever supposed to root for the West-Allen thing, but it’s hard when Caitlin and Felicity have already proven to be better matches for Barry than Iris has.

Who pays for this?: What’s the deal with STAR Labs? Who pays the lease? Who pays Cisco and Caitlin? Why is nobody worrying about security? What the hell is going on? 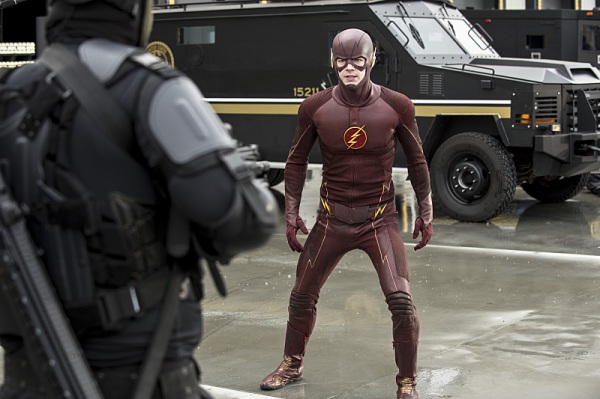 Rainbow Raider: Barry’s off-handed remark about this guy in full riot gear being the “Rainbow Raider” sounded weird to me, especially since he was dressed in all black and a gold mask. Well, the Rainbow Raider is a Flash character from the 80’s who dressed in a rainbow suit, and used intensely colored beams of light to defeat his enemies. Yeah, I’m glad they went with the riot gear.

No nanners: The Grodd I grew up with, from the Justice League cartoons, also HATES bananas.

Heartbeat: While Joe is lying in the hospital bed, talking with Iris, his heart monitor machine has some weird 3D display to it. Upon closer investigation, there are just two lines spiking – one red, one yellow. It might be coincidence, but that could signify the impending face-off between The Flash and Reverse-Flash.

Curious George: I’ve been wondering why they still sometimes refer to Reverse-Flash as “The Man in Yellow,” and here’s an idea. In Curious George, his owner’s name is The Man in the Yellow Hat. It fits perfectly with Eobard’s new pet monkey, Grodd. Not really an Easter Egg, but a fun observation. Also unrelated, did anybody else notice how close “I Am Grodd” sounds like “I Am Groot?”

Street names: Okay, again on the far-fetched theories: 5th Ave and 10th Street…. what if it’s a reference to The Flash: Rebirth, which was released in May of 2010. Rebirth was an interesting book about the return of Barry Allen (he dies in the comic books during Crisis on Infinite Earths, no biggie), and the Reverse-Flash’s admission to murdering Nora Allen and framing his dad. I’m probably reading too much into this, but it fits, so why not?

What was that gold for?: Safe to say that Grodd wasn’t stealing gold to make himself a shiny necklace. I’m no expert on the metal, but I do know it is an excellent conductor for computers and other science machines. Maybe Grodd is on his way to making a mind control device for a larger audience. 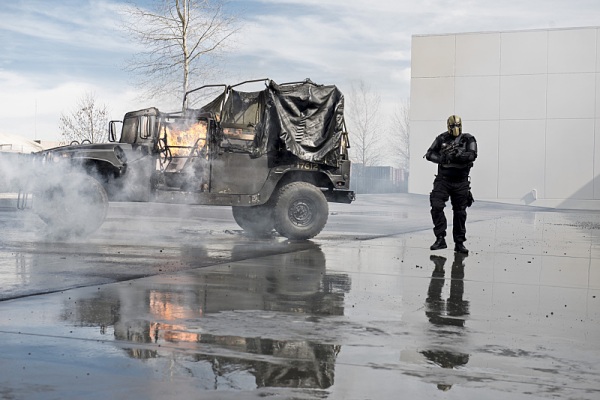 Why reboot the particle accelerator?: Here’s a crazy idea. Eobard Thawne is going to use Barry’s compulsion to save everybody against him. He’s going to activate it, tell Barry that the only way to stop it is to turn back time. The reactor core is shaped like a giant donut, so he could do it that way – or, to make comic book fans happy, he could use the treadmill. Thawne will then run alongside Barry, allowing him to use the Speed Force to return home. There are a lot of holes to this idea, but it’s the best thing I could come up with.

Free Will vs. Destiny: Obviously, Barry is going to live to see next season. With all that the group knows, what’s stopping Eddie from just never having children (or taking his own life)? There is just too much out in the open now for them to question whether or not they can change the world. And having Gideon stowed away in the time vault won’t make that any easier. That is, unless CW decides to just go back in time and erase everybody’s memories. Time travel is confusing.

Line of the Week:

An undercover ice cream truck may be the dumbest idea in police history if they want to remain conspicuous, but when the officer tells the mom looking for ice cream that if the music is playing, “Yeah, it means we’re out,” I couldn’t help but laugh.

Hush Comics gives “Grodd Lives” an B+ for doing everything right, in spite of a Barry-Iris mushfest. With a team-up for the ages coming next week, don’t miss out!

All images belong to The CW and DC Entertainment. The are credited to Cate Cameron..