Leslie Thompkins, the not-blind truth-teller: Let’s face it; Leslie Thompkins is waaaaaayyyy too good for Jim Gordon. She is full of life! She was excited about the circus brawl and the investigation in the murder. She isn’t scared off from Jim’s work either. But when he felt like she needed to go home, she called him a hypocrite for wanting a strong woman, but really just wants her at home to bake cookies. You tell him, girl!

The kid who played Jerome: It’s pretty hard to step into The Joker role after Heath Ledger’s performance. I thought he did a pretty great job of being The Joker before he is the Joker. That laugh was fairly creepy, and even better, his dialogue actually matched what he was doing. The facial expressions Cameron Monaghan pulled off were worthy of the role.

The crime fit the criminal: Jerome, destined to be The Joker, killed his mom because she was a nagging whore. It seemed to weird at the beginning that Jerome said that sex was a healthy human activity. That was my tip-off that he was the killer of Lyla the Snake Dancer. But when he pulled out the line “Don’t nag me to do the dishes if you’ve been banging a clown in the next room,” I knew shit was getting real. And I liked it. Is that weird?

Paul Cicero: Not only is he Tio Salamanca (holy shit, that is Tio Salamanca!!!), the character was pretty cool too. Playing the Blind Fortune Teller, the namesake of the episode, he gives Gordon a “message from the other side.” Even though it caused strife between Gordon and Thompkins, it was the first time a plot point in the show reminded me of Batman: The Animated Series. The message was cryptic, wound up being solved, and through detective work, Paul Cicero was caught in his lie.

Bruce’s notebook: It is pretty clear that Bruce is much smarter than most of the adults on this show. But what was awesome about his research and entrance in the board meeting was all the little kid drawings in his notebook. And yet I still found it offensive when the adults patronized the kid genius, because despite his drawings, he is still the smartest person in the room. 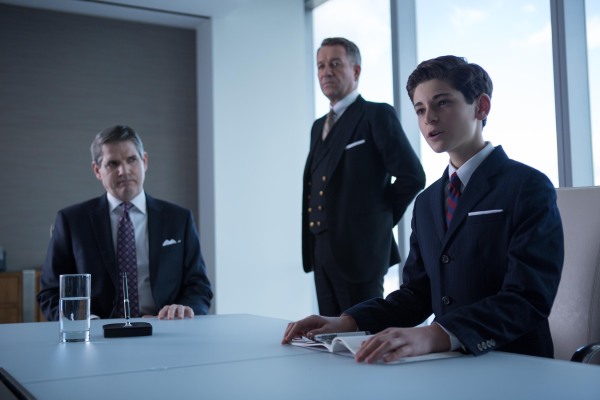 Fish Mooney: Oh my god, I know I write this every week. I cannot wrap my head around how people like her on this show. The snaps, claps, twist of the hands, and shimmying walk is just all TOO MUCH. Oh, and her inspirational speech? Psssshhh. She told them that they are all being used as she stands on a man’s back as if he is a pedestal. And then she promises that only some of them will die, but it’s cool cuz they’re family. It’s terribly acted, terribly directed, and no one, NO ONE would follow someone who did all this. For a split second there, I thought this underground prison thing may change my mind about her. But just like that, it’s all down the drain.

Penguin, poor little Penguin: Here’s the thing. I love Robin Lord Taylor. He is hysterical in real life, and he seems like a really humble guy, considering he is, ya know, an actor. But the goofy music paired with his terrible dialogue and newly found finger snap is doing an injustice to an otherwise terrific actor.

Dance for me!: The whole bit with Butch dancing for Penguin because he is brainwashed was pure poppycock.

Jim Gordon is insufferable: He’s the main character,right? Aren’t I supposed to like him? I don’t care about morality, because Walter White is more likeable than the Gotham detective. His demanding of everyone to freeze at the circus brawl was laughable. But mostly, the way he treats Leslie is disgusting. And him being the reason the Grayson’s and Lloyd’s stopped their feud is just lazy writing.

Barbara is even more insufferable: So she comes home after a drug addled rager, we assume, dressed like Amber Rose’s Instagram account, and sees Ivy and Selena in the living room. Instead of kicking them out, calling the police, demanding to know why they are there, she says, “So, who are you guys?” That’s the reaction? Soooo dumbbbbb.

Haly’s Circus: Haly’s Circus, the place of many a crime in this episode, is the circus The Flying Grayson’s perform for in the comics.

The Joker: Jerome, aka mommy killer, will turn out to be The Joker. As if the hair and red lips didn’t give that away.

Barbara will continue to dress like a hussy, and Jim will love it: Leslie and Jim had a few squabbles this week. Barbara walked in on them kissing. Since the writers feel the need to keep Barbara around, I assume for continuity (like the care about continuity in any other aspect), I am going to guess her dresses will get skimpier and skimpier until Jim realizes that he really does just want someone who will bake him a pie, or cookies, or whatever.

Hush Comics gives “The Blind Fortune Teller” a C for the acting chops of Cameron Monaghan and continuing to give us some bits of Bruce Wayne, but for continuing with the utterly cheesiest music and lines on TV today.

All images (other than the comic image used) belong to FOX and DC Entertainment. They are credited to Jessica Miglio.