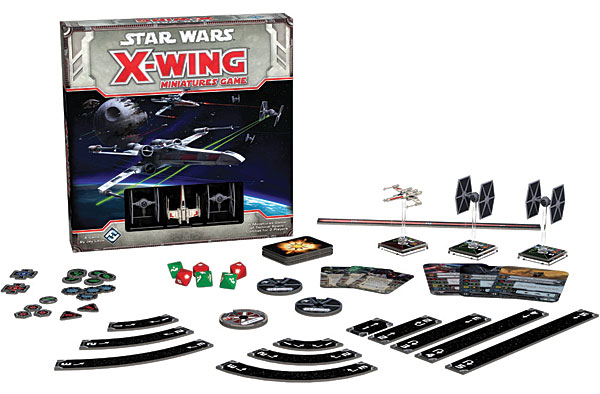 Star Wars is one of the things that I feel defines a part of me. So when given the chance to pilot an X-Wing and dogfight against a handful of TIE Fighters, I said “Yes please!” Star Wars: X-Wing teams players against each other in fun space battles dodging asteroids and enemy fire. You can choose to join the Rebel Alliance, the Imperial Army, and with the new Scum and Villany expansion set coming out, you can be some good old fashioned mercenaries.

The game does take some playing to really catch on, but the learning curve isn’t very steep. The basics of it all go like this, pick a side, decide what ships you want to fly, choose a pilot and perks, and blast each other into space dust. The game play happens in a few different phases. If you’ve played any sort of miniature war game before this will be familiar territory.

The phases are simple, planning, activation, combat, and end phase. So much of the game comes from the planning phase. This is where each player decides how they plan on moving their ships. The catch here is you’re only deciding how to move, and all the players do it at the same time. So you have no idea how your opponent will move. You could set yourself up to be a major target or poise yourself to destroy your enemies. Hell you could both wind up flying directly into each other. Activation is when the players reveal their planned movements and move accordingly, in turn. Players also decide on using boosts and bonuses at this point. Combat is where all of the shooting happens, if your foes are in range you’ll both roll some dice and resolve any damage done. The end phase is basically there for clean up between turns.

As a major Star Wars fan, one of my favorite parts of X-Wing comes in choosing the ships and pilots. You want to control an X-Wing piloted by Luke Skywalker? You got it! You might prefer having Han Solo command the Millennium Falcon. Fantastic, you can do that! Boba Fett and the Slave I? Yes I think I’ll do that. You can even go outside the movies and have Kyle Katarn pilot his HWK-290. It’s fan service at its best. If you’d like to get a little more creative and think outside the box, each ship has multiple pilot choices. You can have Chewbacca fly your Falcon if you so choose. Each pilot has different stats and perks. This gameplay consideration allows for excellent customization to your fleet.

The developers also thought, “Hey maybe players don’t want to do the same thing over and over.” There are mission packs, and soon campaigns coming out that give the players specific tasks to complete to completely be successful in their battles. These added story missions add some nice variety and keep the game from getting too stale.

My own personal suggestion is to play in teams. Teaming up and splitting up the command of your fleet adds a small bit of role playing to your fights. It gives a little bit of wing-man feel to the gameplay. You can both use the same ship too, even the same pilots so there is no conflict of interest, but I say if you’re using the same ships choose different pilots; this will change up the gameplay for your team. Also, download the X-Wing Soundboard for your phone. It’s fun adding in some sound effects to spice up the combat, just don’t go overboard.

The game runs $39.95 for the core game set, which comes with one X-Wing and two TIE fighters. This is just enough to get in some good quick games. If you want to make it really worth your time though, you have to buy expansions, which will run between $15 and $30, depending which ships you would like. The Falcon and the Slave I are very popular and will cost you a little more than a plain X-Wing. Fantasy Flight Games also has some epic sized ships, like the Tantive IV and Rebel Transport expansions. These will cost you $90 and $60 respectively. In the end though all that really matters is the game is fun. The best thing to do would go in on the core set with a friend. If you don’t like Star Wars X-Wing the worst that’s happened is you’re each out $20, but I promise that won’t happen. 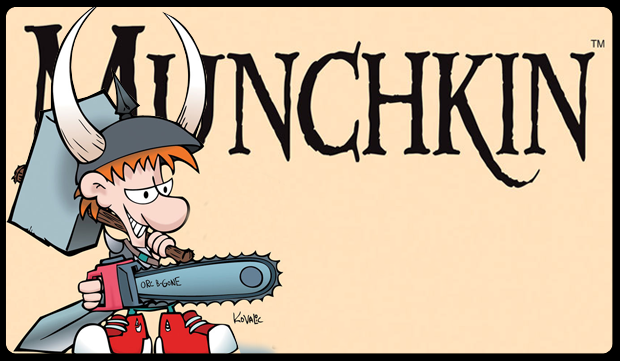 Dungeons & Dragons is the granddaddy of table top games. It’s intricate, well designed, well balanced and a lot of fun to play. Sadly, we don’t always have four hours to sit down and play a decent game. Luckily, in 2003, Steve Jackson Games took everything we love about D&D, threw out all of the complicated stuff and added a great dose of humor. Munchkin is a semi-cooperative card game that should be a part of everyone’s table top game collection.

Munchkin sees each player start out as a level one classless adventurer. During the course of the game, players gain classes, races, gear, magic items all by fighting monsters and random luck. On each player’s turn that player kicks down a door (figuratively of course) and behind that door is a monster, a curse, or something else that could be good or bad. Monsters can be easily defeated, such as a level 1 Potted Plants (I did not make that up) or be much more difficult, such as a level 20 Abominable Snow Monster, who will pick his teeth with your ski poles. If the player happens to defeat his enemy he gets good stuff, treasure and levels. If he fails to defeat it then he gets bad stuff, which can range from nothing at all to being reduced to level one and losing everything.

Now where the proper fun comes in is when all of the players start to interfere with each other. You thought you were fighting a level 1 Maul Rat but suddenly another player makes it a level 11 Legendary Maul Rat, and now you’re in trouble. There is some joy to be had when you watch the light fade from another player’s eyes as they realize they’ve just been boned.

Another great aspect of Munchkin is all of the different game types you can play. You don’t like fantasy? That’s ok Munchkin also does Western, Science Fiction, Zombie, Vampire and Cthulhu, just to name a few. Each version is essentially the same game with different paint and some different rules, so if you know the rules to one type you can pick up a different style with almost no learning curve. If you really want to get crazy, you can actually combine the different types. This means you can be a level 5 Elf Vampire Space Marine. I say buy a few of your favorite genres and go a little nuts. There are also several expansions series for each style and a few sets built from license material, such as Penny Arcade.

For the traditional Munchkin set, they’ve also added dungeon cards. When a dungeon card is in play, it creates a set of rules that everyone must follow until that dungeon is removed. This can make for very interesting play. Just be careful, because in one particular game I was playing I did not properly read the card I played. Basically what happened was I made it so there was one dungeon in play per player, in this case that was eight players. So there were eight separate rule sets all happening at once.

Munchkin is a fantastically fun game for stepping into modern table top gaming. It’s simple, it’s a lot of fun and it is constantly expanding so it doesn’t get stale. Munchkin is also inexpensive to try out; it’s only $25 for any set you want. Depending how many people you have in your group you may want to get an expansion with a few more cards to mix in. Munchkin was the first game to move me past traditional board games, and though Monopoly and Clue will always be near and dear to me I’ll always love Munchkin for showing me that table top games can be more than rolling dice and moving around a board.