What it is: It’s that time of year again: The Walking Dead is back! Every time this show comes back on, it makes us want to prepare ourselves for the zombie apocalypse. Thankfully, that will be easier than ever, as this fully-loaded kit (minus the weapons, but it will do) embroidered with TWD branded items. This isn’t your average novelty set; this kit has some hardcore do-dads, as well as some rewards for the die-hard fans. The supplies listed below are designed for two people to last three days (sorry, all you third-wheels):

How Much it Costs: The survival kit is listed at $130, available as a pre-order through First My Family LLC and will be released in March-April. This is a company that actually sells emergency response supplies, from radios to first-aid kits to kits just like this. The only question I have, other than “What took AMC so long to capitalize on something like this?” is whether or not they will be released by the time the world ends.

Is It Worth It?: Honestly, not really. I know it’s harsh, and I know this is a pretty cool item, but why would you spend $130 for a bunch of crap you can probably get at Wal-Mart or the Army Surplus store for half the price? If you’re spending that much for a gaudy satchel with a logo and some generic first-aid and survival supplies, you’re probably not going to make it that long in the apocalypse anyway. That being said, though, it’s a really clever idea that will surely make them some money, and it’s really not that much more expensive than the other packs that First My Family LLC offers. 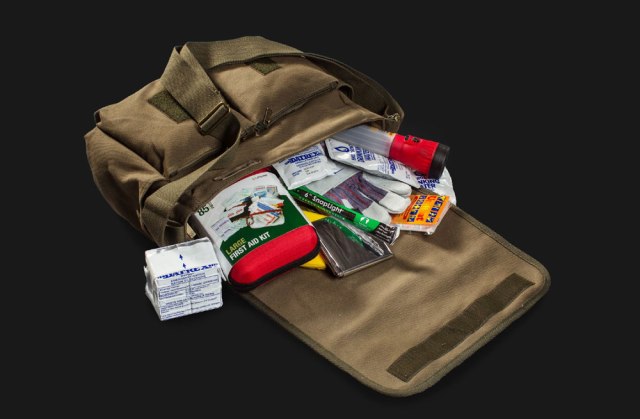 Bottom Line: This is a really cool idea marketed to The Walking Dead fans and zombie apocalypse enthusiasts everywhere. However, It’s just too steep of a price for things that you can gather on your own for a much cheaper price. The fact that it’s adorned with The Walking Dead name won’t help you any in an emergency situation, so why not spend that extra money on a machete, or a hammer, eh Tyreese?