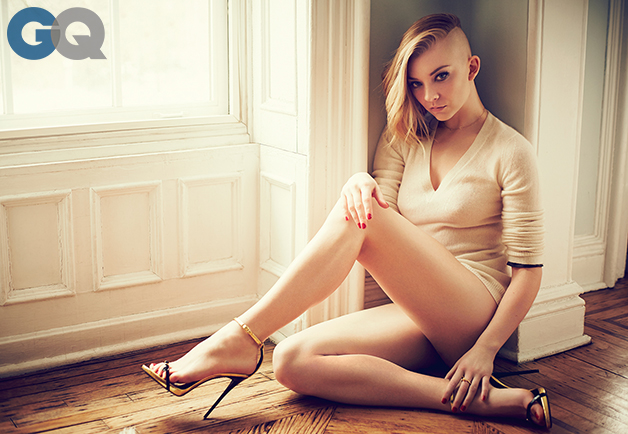 You join us here on a Sunday afternoon, sans-Walking Dead. But rejoice! Season 4 of Game of Thrones is here to fill that gap in your life. Check out this titillating preview.

In other Game of Thrones news, Natalie Dormer (Joffrey’s wife, Margaery Tyrell) has posed for GQ in a very risqué way, luckily for us.

More Throny madness! Gwendoline Christie (Brienne of Tarth) will be playing Commander Lyme, commander of the rebellion and leader of District 13, in Hunger Games: Mockingjay Part 1.

The Heisenberg himself, Bryan Cranston, has signed on to write a memoir about his time filming Breaking Bad. If you’re like us, you will buy one hundred copies, build a fort out of them and scream at everybody who passes to “get out of your territory.” The book is due out next fall.

If you haven’t made time to go see Captain America: The Winter Soldier, it’s not too late. Wanna hear about how awesome it is? Check out our mostly spoiler-free review here.

Arrow just got a whole new level of crazy last week. Summer Glau’s character isn’t what she appears to be. That is, unless you’ve seen this Twitter picture of her in Ravager gear! Ravager is Slade Wilson’s daughter, and one bad B. Summer Glau is usually as deadly as she is beautiful, so I can’t wait to see her tear up Starling City.

Michael Bay’s TMNT (sigh…) has chosen to replace two of its voice actors. The new Leonardo and Splinter voices have been awarded to Johnny Knoxville – yep, the guy from Jackass – and Tony Shalhoub (Wings, Monk). I swear, you can give yourself an aneurism worrying about this movie, but it’s best to just let it happen.

To celebrate Batman’s 75th anniversary, Cartoon Network will be airing an animated short, made by the master himself, Bruce Timm. If you don’t catch it tonight, I’m sure that it will be YouTube gold by this time tomorrow.

DC Animated’s next film, Son of Batman, is one of my most anticipated things of 2014. Check out this new clip that features Batman putting the hurt on Killer Croc. The movie comes out May 6th.

If you’re looking to blow some money, the Limited Edition Season 4 Blu-Ray set (wow, that’s a mouthful) for The Walking Dead has been announced and is now available for pre-order. Fans of the show will recognize the walker on the cover as “Tree Walker,” the walker Herschel convinced Carl not to put down.

Michonne and Rick are having a baby! Just kidding… Danai Gurira revealed the “news” to Jimmy Kimmel earlier this week.

Spiderman 2099 is back! The futuristic web-head made some guest appearance in Superior Spider-Man, but Miguel O’Hara will be getting his own series this July.

The Big Bang Theory is planning a Star Wars Day episode.  And Bob Newhart is going to be Sheldon’s Jedi Master.  Hmmmm….

Will Chiwetel Ejiofor be James Bond’s new nemesis?  We approve, but only if he dies a good death.

There have been some new casting decisions made for Better Call Saul.  Several lawyers and a few criminals.  But really, we just care about Mike.

Kid President is getting his own show.  Unfortunately, its on a network no one has.  But good for that little fella!

The Volume 3 release of Batman: Death of the Family will come with Joker mask.  Yeah, that one.

Have you seen the new trailer for Lucy?  It has ScarJo and Morgan Freeman.  Sold.

Yeah, and there is that Gremlins remake.  Is nothing sacred?!