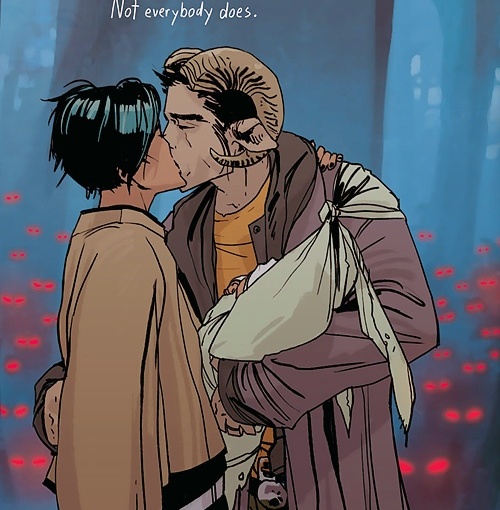 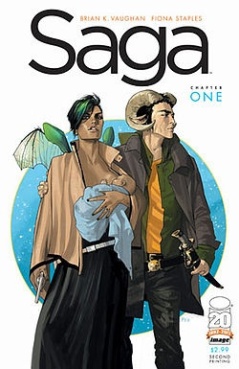 Imagine if The Hobbit, Firefly and Star Wars had monkey sex and left a wet spot in the form of a comic. Saga is one of those rare gems that comes once a generation. Writer extraordinaire Brian Vaughn, of TV’s Lost, and comics, Y: The Last Man is paired with Fiona Staples, total hottie and penciler of books like North 40 and Jonah Hex. The result is a space opera like none you have seen before. If you can envision what all of your 5th grade, overly sexualized pictures would look like if they had space ships and laser pistols, you’d have Saga.
Volume one is the trade version of issues 1-6, originally published in 2012. Once again, Image Comics pushes the boundaries, almost as often as they push back release dates, and gives us a comic worthy of fan-boy argument and minimum orders at your local comic shop.
The story follows two lovebirds born on opposite sides of a galactic war. Take away the horns and wings and Marko and Alana are Kirk Cobain and Courtney Love, or a less violent hipster version of Mickey and Mallory.
Plot Alert!
Our heroine, Alana is from a planet called Landfall and Marko is from a planet called
Wreath. The two planets have been at war longer than anyone can remember. They fell in love and had a mixed species baby. This baby is the reason why they are being hunted by both species.

Our interstellar lovers begin their adventure with the birth of their daughter and our narrator, Hazel.  Its probably the most kick-ass birth ever in a comic. Immediately, they are confronted by an army of angry elk dudes and another group of guys that look like the cops from Demolition Man with wings.
If I sound a little gushy, it’s probably because Fiona Staples single handedly kept my faith in comics alive last year with this title.  Hell, she damn near created a whole new religion, fully equipped with sister-wives, Kool-aid flavored arsenic, and snake charming. So pardon me if I sound a little fanboy while reading my signed copy. This comic doesn’t answer the question, did Greedo shoot first? But it does stir a pot of middle school giddiness once you read a page or two. 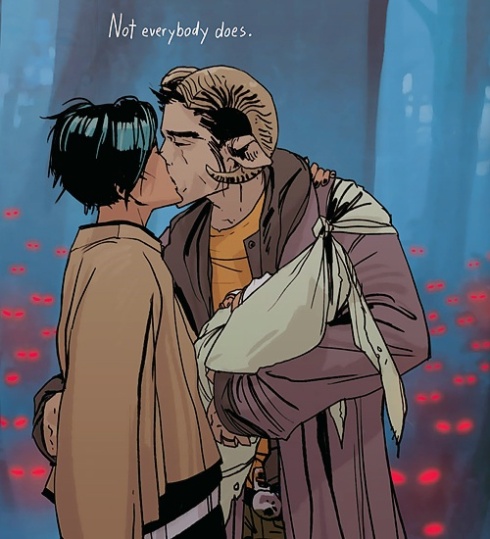 There is a post war, atomic era feel to Staples work. Saga is reminiscent of Dan Stevens Rocketeer epic. Vaughn’s humor compliments her sarcastic facial expressions and the book reads like a still frame sitcom.
Magic is a common weapon and spells are often cast to thwart enemies in this universe. But there is also a healthy dose of light-saber’esk swordplay.
The Will, a freelance bounty hunter hired to find our couple, looks like what Han Solo would have if he’d been played by Bruce Willis.
Our thrift-shop, Gluten-free heroes find themselves in more trouble than they can handle and end up befriending the half torso ghost of a dead emmo-girl named Izabel. Zoinks! 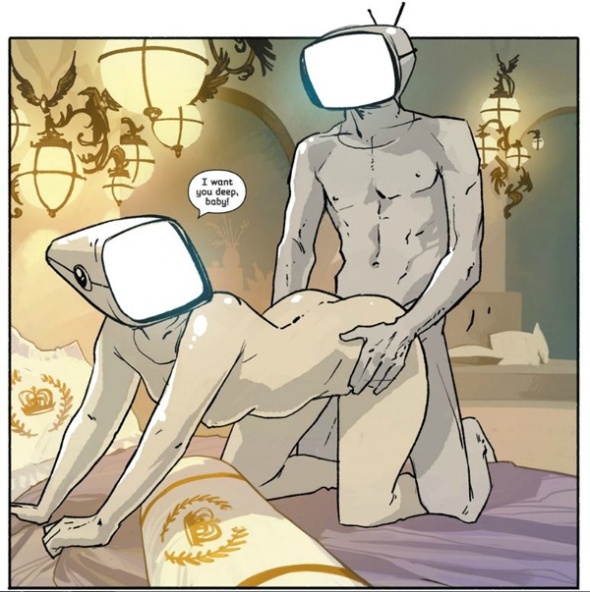 I can only empathize with Mr. and Mrs. Staples having to explain to little Fiona why her art wasn’t suitable for the fridge. The opening scene in chapter four with Will walking through Sextillion is disturbing, but you won’t stop smiling all while trying not to feel guilty about it. There are plenty enough dicks and tits to make you feel like your comic should have come sealed in a plastic bag and sold behind a black curtain.
Overall the story is simple, but the humor is hard to deny. This book is vulgar, sardonic and voguish and I bet George Carlin would have loved it. Volume one has more than enough to keep the reader interested and in anticipation of more Superbad inspired notebook doodles of dicks and spaceships. Bravo for Saga. 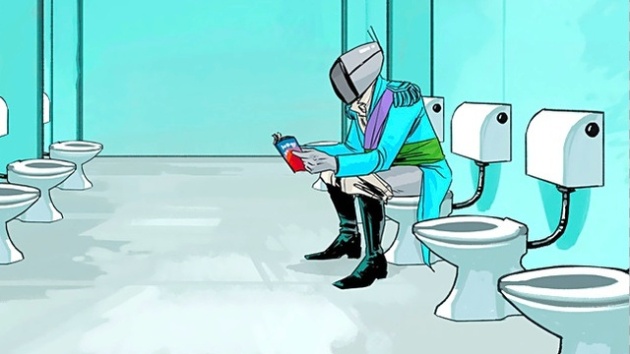 More by the writer: Brian Vaughn is an official Bad-Ass. He has written for everything you like. The list is too long to do justice. It includes Captain America, X-Men and Spider-Man.  He has even crossed universes and written for the guy with the cape and cowl and the other dude with the green bling. Not to mention Y: The Last Man is one of the best titles of this decade and has won numerous awards. Oh, and then there is ABC’s Lost.

More by the artist: Fiona Staples is pretty much the best thing in comics right now. She has worked her way through the industry and is co-creator of one of the most popular titles on the market, Saga. She has done a ton of cover art for multiple titles, including, The Walking Dead, Red Sonja and Superman/Batman. Watch out comic-book heads! This inkstress is already making a big impact on the industry, and this is only the beginning!  Cue spooky villain sound track.