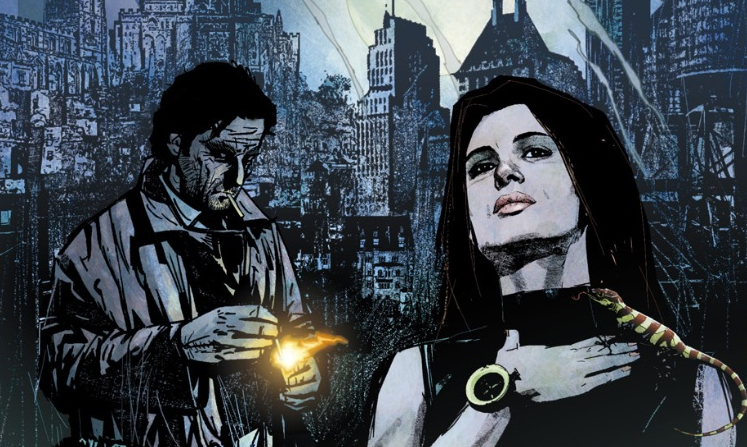 Publisher: Vertigo (an imprint of DC Comics that has published works such as Sandman, 100 Bullets and V for Vendetta)

It’s been awhile since I’ve read Fables. Looking at my home library I’ve noticed I was missing my first volume along with others I’ve seem to have lost over the years. It was fun to pick it up after all this time. I had forgotten how much I enjoyed it. In many ways, it’s what I wish Once Upon a Time would be. All the characters are familiar, as they’ve existed in fairy-tales, children’s books and Disney movies over and over again. The concept of using characters that are now public domain (no copyright claims can be made on them) with an original story and a modern twist is something that had never been done before in the comic book world.

Fables follows the stories of characters from fairy tales and fables who have been exiled to the “mundane” realm of New York City. They were pushed out from their many lands by a villain only referred to as the “advisory” and must now coexist in secret from the “mundy” humans of New York City. Characters who cannot pass as human live on a farm on the outskirts of New York. If you think this story sounds a bit familiar, you would be correct. Writer Bill Willingham has blatantly expressed that his story, while not politically directed, is social commentary on the current Israeli-Palestinian state of affairs.

What’s fun about Fables is that it plays with several different genres. In this volume, we observe a murder/mystery. We are first introduced to Snow, the Deputy Mayor of Fabletown, who’s having to deal with marital problems between Beauty and the Beast. Her course reverts when the two experience martial conflict. After all, it’s hard to maintain the magic of a marriage when you’ve been married for the past thousand years.

At the same time Jack, rushes in to tell Snow that her her sister, Red, has had something horrible happen to her. He found her apartment in disarray and her blood soaking everything. Bigby (the big bad wolf) runs around New York trying to piece together the mystery while at the same time introducing the readers to the world of Fabletown and the characters who inhabit it. I find the way Willingham constructs the story both interesting and clever, and left me with quite a few chuckles. Even the panels have a few eggs that if you pay attention closely can make you laugh. Who doesn’t love a hairy man in a banana hammock?

While enjoyed Legends in Exiles, I also found the dialogue to be a bit strained and hard to believe. I also felt Snow’s reaction were a bit all over the place (OUAT much) and the cheese were at times grating. As for the art, I felt it was well drawn comic for the most part, but, for a murder mystery, I thought it lacked the visual clues necessary for the reader to try and puzzle it together. I actually took me until the reveal of the plot, which carries on for an entire issue, that I was supposed to be playing detective along with Bigby, as a reader. Had I known the ride I was in for, I may have been more perceptive to the subtleties instead of just laughing along with the punch-lines. As a reader, you can now be prepared to be prepared with your pipe and monocles for a fantastical, quasi-interactive murder/mystery.

Overall, I highly recommend reading Fables for anyone Jonesing for a spot of fantasy and who loves a good twist on their fairy tales.

General Reception: Fables is a highly acclaimed book, both critically and among casual readers. There has been an rise in stock for the series, as the series has been awarded fourteen (and counting) Eisner Awards. Talks of a television show have all but died (and then reincarnated in the spirit of Once Upon A Time), but a movie adaptation is currently in the works! Fans love Fables so much that Rochester, Minnesota held the first ever FablesCon in March 2013. In addition, a videogame has been developed by TellTale Games, the same geniuses behind the story-driven The Walking Dead series, and is called The Wolf Among Us, which I will buy as soon as this article is published!

Related Books: If you somehow manage to catch up to the 136th issue that hit shelves on New Year’s Eve, then you still have a plethora of spin-offs and side-stories to explore. And as an added bonus for those willing to purchase the collected versions (graphic novels) of Fables, there are almost always bonus short stories (with words!) explaining a bit of the Fables mythos to hungry readers. Legends in Exile included “Wolf in the Fold” which is of the Wolf’s time when he was fighting the Advisory. I enjoyed the short story and it adds nice origin story for Fabletown.

More by the writer: Bill Willingham is an interesting man. Most of his catalog consists of Fables, as he has impressively written the entirety of the Fables stories (minus a couple here and there). He has just recently came out with a series, published by Dynamite Entertainment, called Legenderry: A Steampunk Adventure, which I can only assume is as hilarious and fantastical as his work on Fables. He’s also done an adult fantasy (image LARPing naked) book called Ironwood, as well as work on the earlier Angel comics for IDW. He’s nerdy in the best ways.

More by the artist: Rolando “Lan” Medina has been a quiet presence in the comic book industry, making his mark on everything from Cable & Deadpool to Punisher: MAX to Storm, the last of which Medina won a Glyph Comic Award in 2007 for, along with his Eisner Award for Best Serialized Story for Legends in Exile in 2003. His style is simplistic, but portrays the story well enough without distracting from it. Starting in April, you can find his art in DC’s new series, Aquaman & the Others.