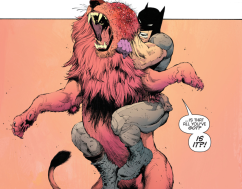 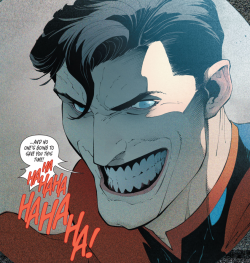 Let’s be honest; this year belonged to the Batman. Writer Scott Snyder and artist Greg Capullo put out a superior product every month. Not only has Batman been DC’s highest-grossing title every month, but topped the sales charts five months this year (Source: Comichron); the next highest selling on-going series is the rebooted Amazing Spider-Man with two months at the top. In 2014, Batman tackled one of the most mysterious and intimidating parts of the Dark Knight’s lore, the origin, and carved out a place among the Batman legendary tales. Then,  If you are reading this book, you are witnessing history as it is happening. – Sherif

Saga has been a continuing monthly book with one of the most interesting and original story lines ever to have been published. Brian K. Vaughn and Fiona Staples continue to dominate the science-fiction realm in comics. Brian K. Vaughn continues to show that he is one of the most creatively functional writers in comics today. There are things in Saga that you are guaranteed to not see in any other book ever. Our favorite fugitive family gets mixed up with a wonderfully eccentric theater troupe and Prince Robot IV has a son of his own. Matched up with Fiona Staples’ artwork, there seems to be no real slowing down for Saga; it’s the most creative, original, and beautiful series of the last two years. – Scott

This year I have read plenty of different series and there have only bee two that have had me on the edge of my seat waiting for the next issue and the more consistent of the two has been TMNT. This series offers absolutely everything a Turtle fan could want, honestly, as it has dealt with characters and situations from the long history of turtle history, almost like a little bit of a flashback series while also offering something completely new and just as awesome. The main team of Waltz and Santolouco are amazing and of course all the other artists and writers have been just as good making this the most consistently good series of the year to me. But with the Mutanimals coming up in the new year, a giant war against the Krang on the horizon and their crossover adventure with the Ghostbusters not being over yet, I am sure TMNT will continue to be one of my top favorites into 2015. – Jacob

RUNNER UP – The Walking Dead (Kirkman/Adlard)

Kirkman’s still got it!!  More than 10 years and going strong!!  The first half of the year was so-so with the conclusion of the All Out War arc.  It was intense that’s for sure, but it was slightly formulaic.  Then came the New Beginning arc, and it blew my face away.  If you can call Kirkman anything, it’s unpredictable!  I buy issue after issue after issue primarily because I NEED to know what happens next!  The undead and the yet-to-be dead have found a happy equilibrium (if you can call it that).  Times are good, but a new foe has reared its head.  And that’s how we know shit is about to do down in a big way.  This constant torrential storm of calm and chaos brings with it an unshakable endearing quality.  I’m a nervous and sweaty wreck in the midst of any conflict or life-threatening situation (which is pretty much all the time) and I’m even more nervous and sweaty when nothing’s happening.  And all I want is more.  Because reading TWD is essentially an addiction now. – Taylor

First, have you seen the art in this book? Oh my God, it’s good. It’s like something fell out of the ’60s and into the 2060s, then trickled back down to lowly 2014. Second, the story – on the surface it doesn’t seem like much. In fact, it even seems like it’d be hard to take seriously: a scientist builds a machine to visit alternate worlds, it malfunctions, and his team gets stuck. It seems like yet another variation on a story we’ve read a hundred times before, but like all great stories, character makes it stand out. Layers of intrigue slowly emerge: maybe characters aren’t as noble as they seem. Was the machine sabotaged? Why are his children (not even old enough to drive) with him? Did I mention the art? – JH