I’ve been concerned about this episode ever since I first saw that the Doctor was going to meet Robin Hood. I mean, the Doctor has been to a lot of places and met a lot of strange people, but, it’s truly rare for him to meet a fictional character. So rare that I could only find four other instances where fictional characters appeared on screen. All four were with the first two Doctors, so…..it’s been a while. I know it’s kind of weird to complain about a fictional character meeting other fictional characters, but Doctor Who is supposed to be grounded in a bit of reality, especially in the historic episodes.

That having been said, this episode was actually not as bad as I was expecting, and we can thank Mark Gatiss for that. I just went with the whole Robin Hood story and tried to enjoy it as a Doctor Who episode. And you know what? It worked! The animosity that the Doctor and Robin have for each other leads to some really funny scenes. Robin has a tendency to laugh at everything no matter how mundane, and the Doctor just despises it. This new Doctor also has a tendency to be a little less trusting; he doesn’t believe Robin Hood is real, he didn’t believe that Daleks could be good, and in that first episode he didn’t really believe anything anyone was saying. It’s a very nice character choice especially since he tends to be wrong.

The episode opens with the Doctor asking Clara where she would like to go. She says that she wants to see Robin Hood regardless of how weird that sounds. The Doctor tries to convince her that Robin Hood is fictional but she insists and the Doctor obliges, if anything, to prove his point. And wouldn’t you know it, they land right in front of Robin Hood himself who promptly shoots the TARDIS with an arrow…uh oh…off to a rocky start…what follows is a bit of arguing and a wonderful “sword” fight where the Doctor uses a spoon with great skill against Robin’s sword. They end in a stalemate and Robin takes the Doctor and Clara back to camp to meet the yet unnamed Merry Men. The Doctor proceeds to examine the group trying to figure out why they appear so real. This is a very funny scene where the Doctor plucks hair from one man, steals a sandal from another and falsely accuses it as being fake, and finally does a blood exam where he informs the minstrel that he only has 6 months to live. We also find out that the Doctor has a hatred for the band’s constant, inane laughing, something that plays out throughout the episode. The Doctor also mentions that they may be inside a microscope which is a nod to a First Doctor and Third Doctor story.

If you’re familiar with the story of Robin Hood at all, then you know that the archery competition is next. It comes down to Robin and the Sheriff, but, the Doctor soon intervenes with what later turns out to be homing arrows. Sick of the constant arrow splitting, the Doctor finally whips out his sonic screwdriver and blows the target up. This immediately leads to his, Clara’s and Robin’s capture. But, in the ensuing battle, we find out that the Sheriff is not exactly who you’d think he was. He actually has an army of robots disguised as knights. Robin eventually severs one of the robots arms and we get a look at the inner workings, which bear a striking resemblance to the clockwork robots from the Series 2 episode “Girl in the Fireplace” and Capaldi’s first full length episode, “Deep Breath.” Perhaps all these different robots are just the same “species” of robot and we’re just seeing them at different points in their “evolution” or maybe they are just all related somehow. I mean, every Capaldi episode so far has featured a robot of some sort. Either way, our intrepid trio has been captured… 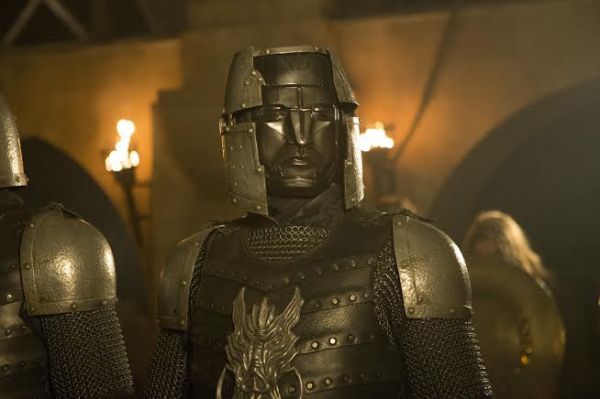 The scene when they’re all locked up together is probably my favorite in the episode. Robin and the Doctor continue to bicker over who is in charge, who would survive longer (it’s the Doctor if you’re wondering), whether or not there’s a guard outside the cell. Finally, Clara chimes in and brings both of them to a more focused state of mind, although not quite entirely. This is when we discover there was a guard who was posted to find out who the ring leader was. While the Doctor and Robin argue over who will be the better interrogatee, the guard is busy unchaining Clara to go speak to the Sheriff. This next scene is absolutely brilliant. Clara proves that she is one of the strongest companions of late and she solidifies her place as my favorite companion. In fact, if you showed me this scene and I knew nothing about Doctor Who, I would believe you if you told me that Clara was the Doctor. She manages to manipulate the Sheriff in a way that is so smart and clever. Right now, I feel she has more of a grasp on things then the Doctor. He really needs her right now, as more than just his caregiver. 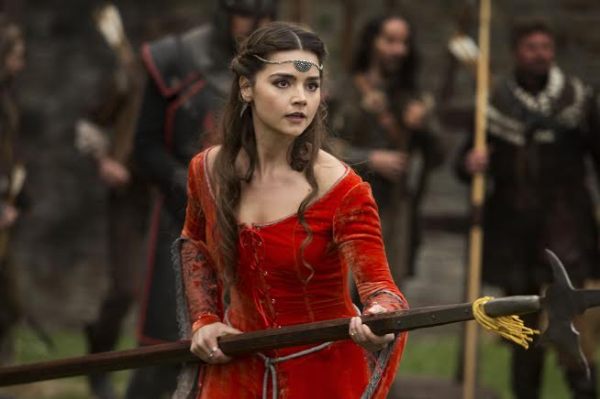 Meanwhile, the Doctor and Robin escape and eventually find themselves inside of a spaceship. The Doctor starts trying to find out why the robots are here and finds out they were headed to The Promised Land, which he recognizes from the robot in Deep Breath. Here, the Doctor also shows Robin that he is a fictional character by showing him the robots’ database’s records of Robin Hood. Here, we actually get a glimpse of Patrick Troughton when he once played Robin Hood. Troughton, of course, played the Second Doctor. There have actually been quite a bit of references to classic Doctor Who throughout Capaldi’s run so far. Eventually, Robin and the Sheriff end up in the inevitable battle we all knew was coming and, of course, Robin comes out on top. Without a leader, the robots leave Earth and because they didn’t have the proper fuel, they explode shortly after entering orbit.

Even though this episode was risky, I feel like they pulled it off as best they could. The actor playing Robin Hood was absolutely fantastic in bringing such an absurd character to the small screen and really making you feel for him. He was able to portray the bombastic nature of Robin Hood but still keeping him grounded in reality. He had a purpose and feelings masked behind the hero persona he put on. Overall, I give this episode a nice solid B. Did I ever think I’d rate an episode like this that high? No, but it really was a lot of fun. It’s also going to make a nice episode to put in between last weeks crazy Dalek episode and next week’s intensely scary one.

Doctor Who and all its properties belong to the BBC.