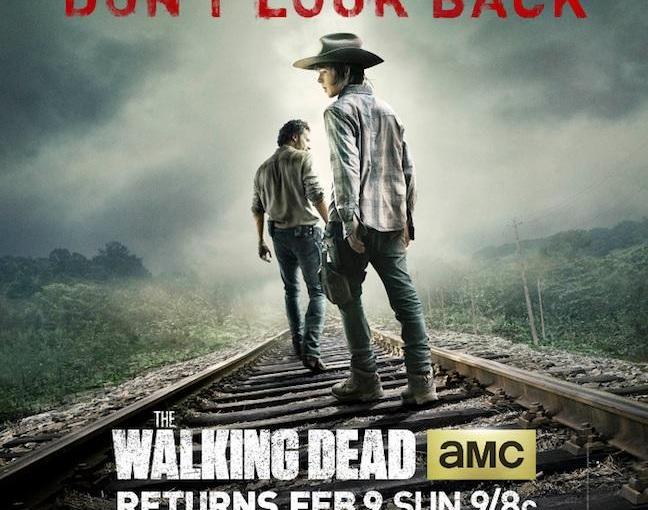 Welcome to Spoiler City, population: you.

So many questions and so little time!  Last December, the first half of season 4 of The Walking Dead wrapped up with the raid on the prison.  Oh, did I say not to continue reading if you have not seen season 4 yet?  Take caution, this is only if A) you have seen season 4 or B) you haven’t, but don’t really want to watch 8 hours of quality television.

Here is what has happened so far:

The displaced people of Woodbury made nice with our group in the prison.  Rick chatted up a lady in the woods and narrowly missed being fed to her husband.  Glenn and Maggie were almost pregnant.  Carl wasn’t allowed to use his gun.  Carol was teaching knife skills to tiny children secretly.  Michonne looked for The Governor on her horse.  Then supplies ran short.  They went on a run.  A helicopter came through the ceiling of a convenience store and an alcohol bottle broke a entire shelving unit.  Then people died.  Survivors at the prison realized that the walkers on the outside of the fence were being fed rats.  Then a survivor died of the flu and starting chowing down.  Then people died.  Rick farmed, and then he quit when he realized his pigs probably caused the flu.  Tyreese got flirty with Karen, the crazy lady from the Woodbury crew.  Then he found her body burnt along with a man’s burnt body outside.  Tyreese raged out.  The group then quarantined the fluers vs. the non-fluers.  Maggie cried that Glenn was a fluer.  Beth got told her she still had a job to do.  Carl and Hershel went the woods to look for elderberries.  Daryl, Bob (a newcomer), Michonne and Tyreese went to look for meds at a vet.  Bob found his medicine: liquor.  Daryl got real mad.  Then they got stuck in a herd of walkers.  Tyreese beat his way out with a hammer.   Rick investigated the burnt bodies.  Carol confessed.  Then they went on a run and Rick kicked Carol out of the group and gave her a station wagon.  Some of the fluers became walkers.  Hershel gave a speech, killed a walker and cried.  Meanwhile, The Governor was sad and alone.  Then he found some girls.  Then he had sex with one next to her kid.  Then they joined a group.  Then he killed their leaders and became the new leader.  They raided the prison.  Hershel died.  The Governor died.  Lots of people died.  And we were all sad.

How do the events of the TV show line up with the comic books:

Up to the mid-season finale, The Walking Dead has done a great job of separating the story in all mediums, giving even the most well-read fans their money’s worth when watching. Many of the characters in the comic books are represented in the television show, but a lot of the context that brought them together has changed drastically. However, it’s our theory that, with the show moving so quickly, there will be a lot more content borrowed from the other forms of The Walking Dead.

Here are some of the most noticeable differences, separated by the rag-tag groups that split off at the end of “Too Far Gone:”

In the show: Rick and Carl have left the prison totally defeated emotionally. Rick spent most of the first half of Season 4 protecting Carl from the dangers of the outside, but during the calamity of the gate collapse, Carl went Rambo on the walkers to earn Rick’s respect. They leave the prison together (without Judith!). Rick is badly wounded.

In other literature: Pretty much exactly the same thing. The only difference is that, along with the loss of Judith, he saw his wife Lori get murdered right in front of him. He then proceeded to go insane, with the phone and the whole shi-bang. Oh yeah, Rick also lost his freaking hand!

Predictions: This will be Koooooaaarrrrlll’s (Carl’s) coming out party. In the books, this was a big moment for Lil Rambo, as he was forced to care for an ill Rick. Couple that with Chandler Briggs’ puberty growth spurt, and you will have one temperamental young man.

In the show: In a fashion that only a bad-ass ninja like her can have, Michonne was busy hacking and slashing every single walker in sight, alone.

In the comics: Most of the comics focused on Rick & Carl. Michonne emerged to save them from an attack, as they drove off together and met back up with the others.

Predictions: Hopefully it will be more of the same, and Michonne will mow down every walker in between herself and the Grimes. They’ll need all the help they can get.  But because the show can get so deep, it would be good to see some introspective stuff from Michonne.  Who was she?  Who is she now?  Why did she cry about the baby? And who were the men who were her zombie slaves?  Maybe now is the time to find out.

Glenn and the bus full of useless strangers:

In the show: Still recovering from whatever gross disease was making people bleed out of their eyeballs, Maggie had put Glenn on the bus. Seemingly, Glenn is in the best spot, but we all know that everybody in the apocalypse is useless.  Plus, the bus was shot at as it sped away.

In the comics: Glenn and Maggie had actually taken off early with Dale and Andrea, making a retreat to Herschel’s old farm (which was not burned down).

Predictions: There’s no doubt in our minds that the bus full of useless people will become zombie fodder. Glenn will be forced to get himself out of a sticky situation again, but there’s no way they let him die.

Tyreese, Sasha, Bob and the little girls training for a role in the remake of The Professional.

In the show: It looked like Tyreese went off on his own, but he could have tried to follow Lizzie and Mika. Meanwhile, Sasha and Bob ran off together in a separate direction.

In the comics:  Tyreese was the one who was beheaded by Michonne’s sword in the comics. He was also MIchonne’s lover.  Sasha was not in the comics.  Bob stayed at Woodbury and we have seen him since.  The little girls seem to be the equivalent of Ben and Billy from the comics, a pair of brother’s who were a little odd.

Predictions: Tyreese has a leadership quality about him that has yet to be banked on.  Now that he is separate from the group, he may channel his inner Rick, especially if he is with the girls.  He may try to take on a father role to them.  Bob seems like he has a lot of development left in the show. We think it is possible he will be the cause of a lot more pain for our survivors.  Sasha doesn’t seem long for the world.  If Tyreese is to have any development, his overbearing sister will have to die.  We also believe that the little girl named Lizzie, the one who is a little more cuckoo will come clean about being the real murderer of Karen.  And maybe she will kill her younger sister.

In the show: Daryl and Beth escaped the carnage together. It’s almost too convenient for Beth, who has been after Daryl’s loins for over a full season now.

Predictions: Daryl keeps everybody safe – well, everybody who looks to him for protection (RIP Merle), but something tells me that Daryl pushes her away; she will react similarly to the way Carol did in the comics. Carol, after being rejected by Rick when she offered to be shared by him and Lori (awwwwkward) and being cheated on by Tyreese,  jumped into the loving arms of a zombie. Besides, AMC has already announced that there will be Daryl-centric episode happening. Between Daryl and us, there’s no reason to let Beth become a third-wheel.

In the show: Speaking of Carol… she is such a different person in the show vs. the comics and even a different version of herself than when we met her.  Last time we saw her, she had packed up her station wagon with a lot of gas cans and was on her way to find a different group after she admitted to killing and burning the bodies of Karen and David. Also, she felt like it needed to be done and didn’t feel very remorseful.

In the comics: Well, Carol never escaped prison, or even made it to the stand-off.  As said earlier, she asked to join the marriage of Lori and Rick and when she was rejected, walked right up to a walker and made out with it, subsequently, getting her face eaten off in front of the group.

Predictions: Carol will be at the Alexandria Safe Zone (rumored to be called “The Sanctuary” in the show).  It is the next place we go in the comic series and only makes sense that will be our next stop.  But with the way Carol left, not to mention the fact Melissa McBride has been making the late night circuit, we know that wan’t the last of Carol Peletier.

Hush Comics as a whole are torn on this issue, but we feel that Judith has nothing to offer to the story, and she (similar to Lori) was removed from the situation in a way that allowed The Walking Dead to stay on television.

Question 2: Who is the next core character to die?

According to an article from Comicbooks.com, the next character to die will be “somebody who hasn’t died yet in the comics.” Now, this narrows it down to: Maggie, Rick, Carl and Michonne. The most believable of that list is Maggie. Knowing TWD, I think there’s a play on words. I think that this implies that somebody who isn’t in the comics at all. And this list is much more interesting: Beth, Sasha, Daryl (yeah right!) and the two little girls.

Question 3: Where do we go from here?

Well, that’s the big question. This time, there’s no RV to the rescue and no Greene farm to go back to. Right now, we have several main characters all on the road, and all alone. Maybe they’ll head to Nebraska? The logical answer is that they will find a remote village, maybe by the name of Alexandria. However, I kind of hope that they take their time. The real fear in the apocalypse is the open road.

Question 4: Who else will join the ranks of the Survivors?

Abraham, Eugene and Rosita will definitely be making their debut this season. The trio were an integral part of the group in the comics, so I expect them to be great additions to the show.

Want to know more?  Check it out this video AMC released.  It gives the audience some scenes that make us speculate even more.  And don’t forget to watch The Walking Dead tonight on AMC!

All credit for pictures and videos are credited to AMC Television.