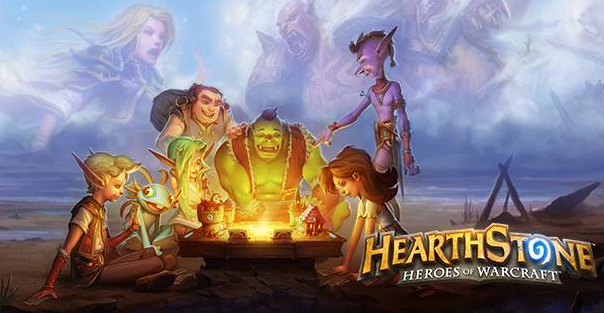 Alluring Element: CCG based off World of Warcraft, FREE!

Check it out if you liked: World of Warcraft, Magic the Gathering, any CCG

So earlier this year, Blizzard took an interesting and unexpected turn with their product line. We all know Blizzard as creator of some of the most popular online games ever: World of Warcraft, Diablo III and Defense of the Ancients 2. You probably know someone who actively plays any, if not all three of these games. They are juggernauts. So when Blizzard decided to release Hearthstone, a digital collectible card game – and it’s free to play on top of that – it was kind of shocking. This is like nothing they’ve ever done before.

Now if you haven’t ever played a CCG before, digital or physical, this will be a brand new experience for you. If you have played a CCG, then this game will come very naturally to you. Hearthstone is based off of the WoW universe. Blizzard took usual CCG mechanics and simplified them. There isn’t that much to keep track of and no really confusing rules. It’s an excellent jumping of point for anyone new to CCGs.

So, starting out a you can choose a class to start playing as. There is one set of cards for every class from WoW, and a popular character represents each class. If you choose mage you play as Jaina Proudmoor, if you prefer warlock you’ll be Gul’dan, and so forth. I like the idea of using classes because it allows a WoW player to represent him or herself in Hearthstone the same way they do in the MMO. The classes act in the same way as the color/elemental choices Magic the Gathering players are familiar with. Each class has their own set of cards that only that class can use, and you’ll gain more of these as you level up that class. There is also a large pool of generic cards, which every class can use. Each class also has their own special ability, the warrior, Hellscream, can add armor to defend against attacks, the shaman, Thrall, can summon totems to assist. 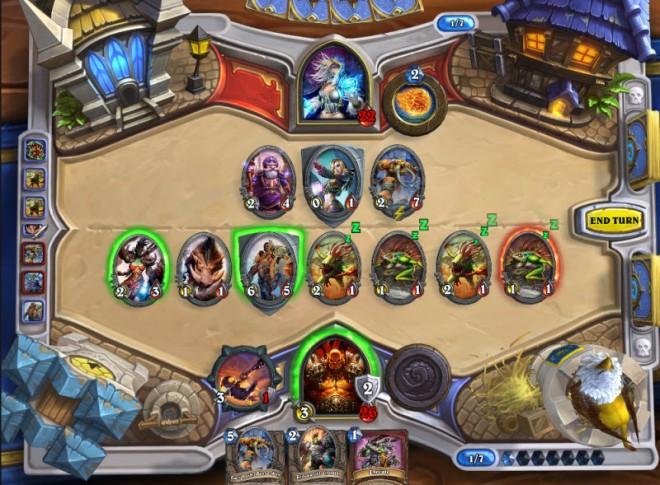 The card types are primarily broken up into creatures, spells, and bonuses. Anyone who’s played an CCG before will feel at home with this. There is a cost to play any cards, from 0 to 10 mana per card. With this mechanic, Blizzard keeps an even pace through the game. Your character starts the game with one mana and gains one mana every turn, maxing at 10 mana even if you play for more than 10 turns. So games start out slowly, but when a player gets to the seven or higher mana portion players can start playing many cards at once and brining out extremely powerful creatures. This is all pretty standard but limiting the amount of mana a player can gain and setting a maximum is nice because it doesn’t allow problems that are common with other CCGs, such as mana overload with no creatures and visa versa. 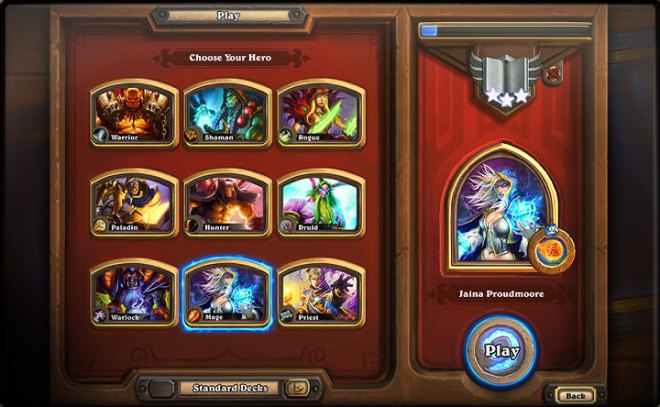 One feature that I’ve not seen in a CCG before is the ability to turn the player, or in this case the WoW character that represents them, into a weapon. Characters can be equipped with weapons, turning them into threats and not just targets. The hunter, Rexxar, actually just has the special ability to shoot arrows and do damage. So there is a chance that even if you don’t have creatures usable you can still potentially remove some of their 30 hit points. 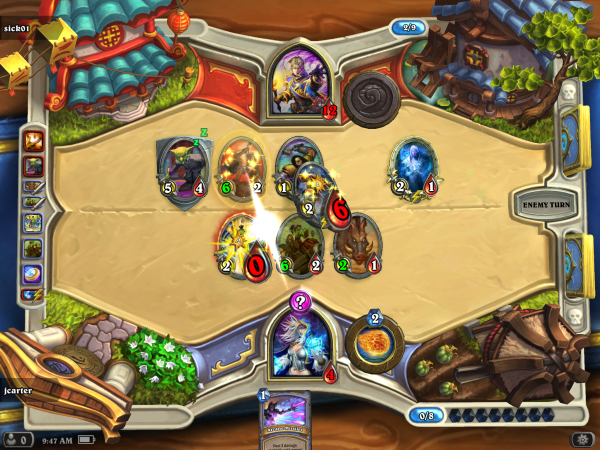 The creatures are well-varied and make the game more interesting. Making a deck of nothing but murlocs is a lot of fun, if you can handle the murloc battle cry every time you play one. Creatures come with their own special qualities, probably the most useful of which is Taunt. Taunt forces your opponents creatures to attack that creature before anything or anyone else. Loading up with creatures with Taunt creates a wall that protects your character while being able to attack back.

Probably the biggest draw for most is going to be the fact that it’s free to play. This is definitely not normal for Blizzard. Now you can pay them if you’d like. You can buy booster backs in order to bolster your ranks. There is a free way to get booster packs but it takes time and there are certain, extremely powerful cards, that only buying packs can get. It gives the game a little bit of that “pay to win” taste. If you are someone that plays for free and your opponent plays one of these exclusive cards in the middle of a game, especially if it’s one you’re currently winning, it can really suck the wind out of your sails. 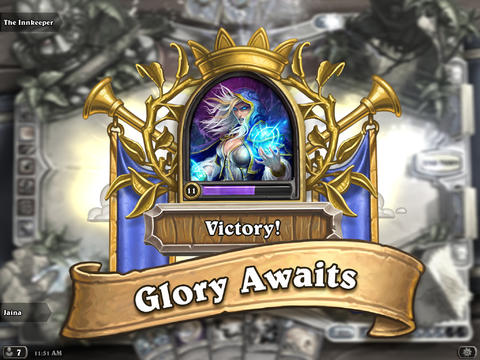 For me there is nothing really special about Hearthstone. They don’t really mix up or improve on much from the way most CCG are played. It is really helpful the way they help to keep pace in a game so none one can gain a large advantage right away. The classes are fun and each has something small that differentiates one from the next. Although, the majority of creatures are communal; there are a lot of repeated cards and this takes away from the variety a little. Nevertheless, Hearthstone is a well-rounded simple game that has a very shallow learning curve, which is good, and something we expect from Blizzard now. It’s certainly worth the time to try it out. I give it a B+.