In this consumer-based industry, it can be easy to forget the years of hard work that the people in the business put in. Behind every panel, it takes a skilled writer, artist, inker and colorist to make the product complete. Behind each scene goes hours of preparation. Hush Comics’ “Respect My Craft” articles will dive into the history of these comic book and pop culture greats that will hopefully give a new perspective on how the men and women behind the pen (or stylus) contribute to the collective awesome-ness of the nerd world, or at least give you a reason to invest in their work.

“When I write, I treat it like the last time I’ll be writing that. Not having had security before, thinking they’re just going to replace me, that allowed me to appreciate what I’m doing.” – Jimmy Palmiotti (NYCC 2013)

Jimmy Palmiotti grew up in an Italian Catholic household in Brooklyn. Like any rapscallion growing up in the city, Jimmy was drawn to comic books and animation from an early age. His influence didn’t come strictly from comic books. Sure, he enjoyed books like Superman and Fantastic Four, but Jimmy also loved the light-hearted books like Archie, Richie Rich and the “Little Annie Fanny” strips from Playboy. His earliest work came in the form of animated flip book cartoons of his mean teacher getting boned by a horse. It really set precedents for the type of tomfoolery he would show in his work going forward (thankfully, though, not the type of content). Oddly enough, it was the crappy living conditions of comic book artists that made him stray from the business after ghost-inking for Gene Colan Howard the Duck. 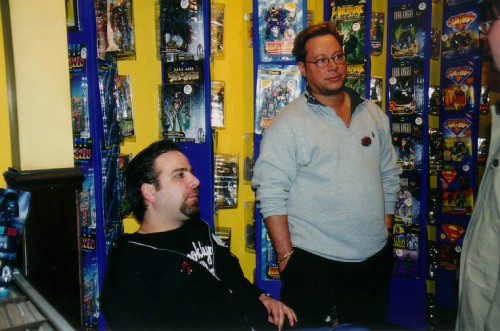 Instead, Jimmy graduated from the New York Technical College with a focus in advertising illustration. He did some work for Pepsi, Maybelline and Bill Gold (poster design for films like Clockwork Orange). He used this professional experience to carry over with him to Marvel, where he began by inking the Men in Black series. Pretty soon, his tendency to output solid work on-time led him to begin inking a variety of books in the Marvel stable, earning him a reputation for catching books up that were behind schedule. He also built connections by inking for other publishers, like Dark Horse’s X series, Valient Press’ Ninjak, and Milestone Media books like Static and Hardware. Jimmy’s career would really take off when he met a young artist named Joe Quesada (a current BFD and Chief Creative Officer at Marvel Entertainment). The duo broke off from Marvel to create their own publishing company, Event Comics, in 1994.

The mid 90’s was a time for trailblazers in the industry, when many bold creators set out on their own. Event Comics was the birthplace of characters like Ask, Painkiller Jane, 22 Brides, and Kid Death & Fluffy. Event may have closed up shop five years later, but the ride was far from uneventful. Jimmy and Joe had an offer from Dreamworks to create a movie based off Ash, which at the time was pretty much unheard of – which they declined, twice. Their success led them to throw giant industry parties deemed “Marvel Nights.” Their networking led to Event being contracted to create the Marvel Knights imprint. As the industry came into the digital age, Jimmy thought it best to switch it up to writing. Marvel Knights intern Justin Gray became Jimmy’s co-pilot, and the two have co-written books for nearly 20 years, starting with Wildstorm’s The Resistance and 21Down.

The big acclaim came from the 2005 reboot of the Jonah Hex book. Together, Jimmy and Justin brought back Western comic books and made books fun to read in a one-shot capacity, making it easy to enjoy no matter which issue you picked up. Since his days with Marvel, Palmiotti has played turncoat for DC Comics, and the readers have been the winners. After stints with Uncle Sam and the Freedom Fighters, Terra, Power Girl, and the ComiXology-exclusive Ame-Comi Girls, Jimmy came back to Jonah Hex with an original graphic novel, Jonah Hex: No Way Back, in 2010, and led a very successful run of All-Star Western during the early stages of the New52 relaunch. Lately, you can find Jimmy living the dream, writing Harley Quinn stories with his wife, Amanda Connor. Their work relationship isn’t just collaborating on books, though.

Together, along with Gray and a few others, Jimmy and Amanda created paperfilms.com. Paper Films is a multimedia company that offers “services ranging from world building, screenwriting, intellectual property development, video game development, illustration, editorial experience and much more.” Their resume includes: a Painkiller Jane TV series based off Jimmy’s Event Comics’ creation, Random Acts of Violence, the story for Injustice: Gods Among Us, and several original graphic novels. Thanks to Kickstarter funding, Paper Films has made six original books. Their most recent title is Denver, a science-fiction story about a dystopian future where melting icecaps have flooded the world, leaving the Mile High city as the only city left on Earth. His next Kickstarter project will be called African Odyssey, a series about a time-traveling history professor from Africa’s future.

He is very involved on his own blog and on Twitter, where he often supports Kickstarter campaigns for creator-owned material.

None of the media in this article belongs to Hush Comics; it all belongs to their respective properties (ComicVine, Stash Bash 1999, TalkingComicBooks).