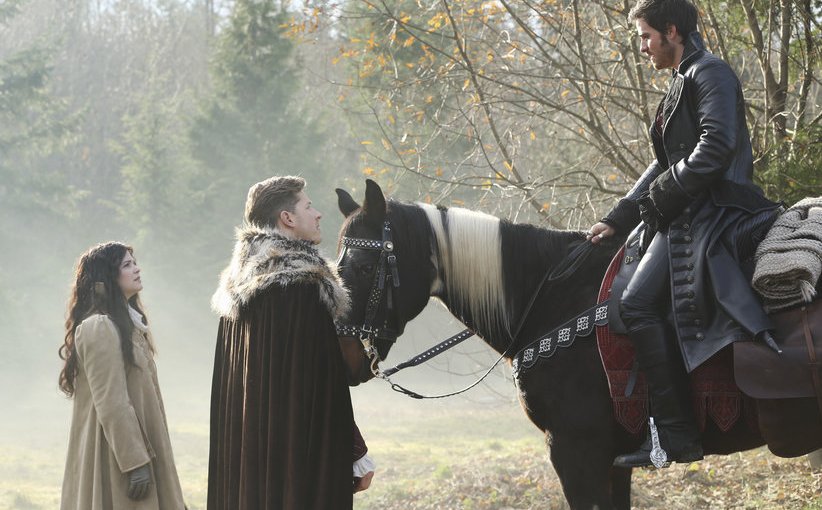 Once Upon a Time Returns March 9th (Are You Ready?)

Well, after a three month hiatus, Season 3 of Once Upon a Time is finally returning. Based off the preview we can expect: the Wicked Witch of the West, everyone in mortal peril again, and it’s up to Emma to save the day. Again.

At the close of the last episode, Emma was in domestic bliss with no memory of her magical past or her family. It seemed she and Henry got their happily ever after – one year without magic, villains, and complicated love triangles. That is, until Hook showed up on her doorstep giving her one knock out of a kiss trying to jog her memory. We all knew that happy ending could only last so long. (I will say, if the show had been canceled it would have been a stratifying way to end the series.)

“Serenading Manhattan” will pick up where the cliffhanger left off. The actors have been talking about the season and it seems the show might take a darker grittier feel. Also, there’s a new villain at play. I’m a little hesitant about the Wicked Witch of the West but with Regina and Gold switching sides and Pan concurred we need a new villain to change things up a bit. This season has been working towards a different feel, and I hope the show continues to listen to its fans. Again, we are left wondering if OUAT will be all over the place or figure out a rhythm that suits the show.

Watch the promo below. What are your thoughts and hopes for the rest of the season?

P.S. Once Upon A Time in Wonderland is also coming back Thursday, March 19th 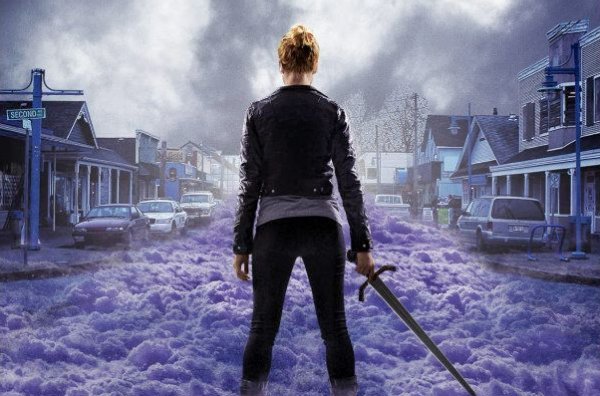 I still haven’t figured out what it is about Once Upon a Time that keeps me watching week after week. I think it may have something to do with the side of me that enjoys being frustrated and dissatisfied. The show constantly goes the route of  predictability. Case in point: Peter Pan is Gold’s father. Massive-epic eye roll. Like none of us saw that coming.

And now two episodes later  Pan has taken over Henry’s body and those stuck in Neverland are back in Storybrooke.

I would like to take a moment to go back to the episode “Saving Henry”. I have this love, love relationship with Regina. I know she’s an evil vengeful woman but, I love her. She acts through the terrible writing with vigour and her motivations are the clearest. Not to mention, she’s hot. Every once and awhile when Emma and Regina gaze at one another, I imagine them becoming lovers, raising Henry, and living happily ever after. Does anyone else notice the great chemistry those two have? 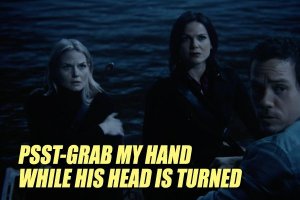 Regina dominated “Saving Henry”. She’s so kickass it makes my nethers twinge. The best part of that episode is the moment when all the mothers are being constricted to death by the tree of regret and Regina is glowering at Pan: “I did cast a curse that devastated an entire population. I have tortured and murdered. I should be overflowing with regret, but I’m not because it got me my son.” She breaks her bonds, plunges her hands into Pan chest, and reclaims Henry’s heat. It’s moments like these that the show is so good at. If it wasn’t for Regina, I think I would have stopped watching a long time ago. 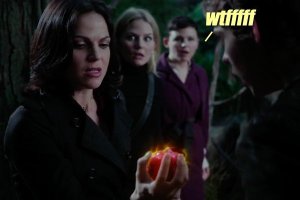 This episode also revealed some information about the Darlings I had been expecting: The Darlings are totally evil. Granted, after watching Hemlock Grove and seeing Freya Tingley as Wendy, all I could do was scream evil, evil at the screen. The boy Darlings’ have been searching for Henry since he was a babe and is working for Pan. Time will tell what will become of the Darlings in the season to come. Maybe Wendy is the good one of the bunch, but I doubt it.

Both the crew and the lost boys are back in Storybrooke. They all think they are safe except Emma who’s got one of those gut feels. Henry isn’t right and Emma feels like there is something up. Overall, I found this episode to be obnoxious, trivial, and annoying.  The episode kept going back to the Magical Kingdom when Snow and Charming were on their honeymoon. Is anyone else tired of watching them make out and get all lovey-dovey and optimistic on each other? At this point it’s overdone. This part of the story wasn’t needed at all. It was useless, unless there is some egg I’m missing that will play out later in the season.

In Storybrooke: Ariel and Eric have a reunion. Gold and Belle have a tender moment (vomit). Tinker Bell meets up with the Blue Fairy (bitch).  Hook is brooding over Emma. Snow and Charming are pushing Emma and Neil to try dating and Emma just doesn’t seem interested. The Hook, Neil, Emma love triangle seems to continue.

It’s amazing how much nothing really happens in this episode. Pan, which is the most important part of the story becomes a subplot. Pan’s number one goal is to get into Regina’s tomb where she keeps all of her magic. In order to get in there, Pan calls his shadow to wreak havoc on the town. The shadow attacks the Blue Fairy: Yes! I have never liked her and I think the show is evolving to explore the darker side of her. I’m intrigued to see what they might do with Blue and Tinker Bell.

This of course makes Emma’s gut feeling push her to get the box where Henry is imprisoned. They all find out that Pan is in fact Henry. At the same time Regina takes Henry/Pan to her tomb for safety. This is exactly where he wants to be. He knocks her out and steals the curse Regina originally unleashed on the Magical Kingdom.  Dunt dunt duh. With that, the episode ends. Up next week is the winter finally. 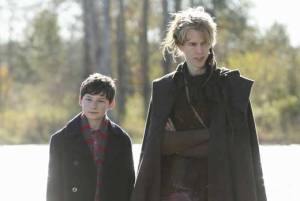 Possibilities and predictions: I don’t think the Blue Fairy is truly dead. Not many are truly dead in Once Upon a Time.  We all know that Pan has to sacrifice what he loves most in order for the curse to work. Is it Gold? I hope it’s not. I hope it’s a little darker than that. But, we can’t forget the prophecy: “The child will be your undoing.” Since Pan is in Henry’s body I wonder if  this is  how the undoing will work out?

Pandora’s box: It releases all the ills for the world and at the bottom there is hope. I believe Henry still remains to be that hope now that he is out of the box. This still plays into my idea that Henry is the once and future king.

Magical Kingdom: We haven’t seen the Magical Kingdom since Mulan and Aurora had their moment. Does this mean both landscapes will once again become one? What about Robin Hood and his Merry Men? It would seem both groups will need to come together to defeat Pan.

Overall, “The New Neverland” gets a D. There was too much useless story that really didn’t need to be there. But, I can’t get give it an F. I enjoyed Regina and Emma’s dynamic and their ability to work together to protect their son. I’m also intrigued by Blue and The Shadow. With so many new characters being introduced I’m curious how they will all begin to fit together.