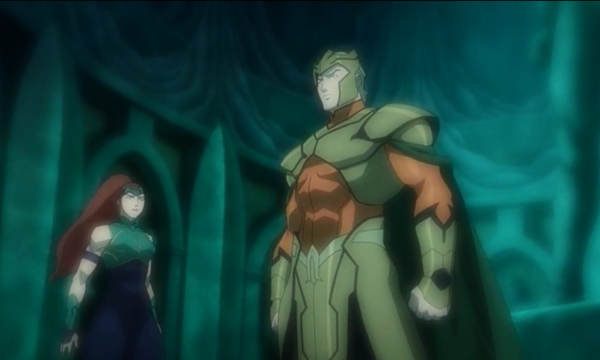 With a strong, unassuming name like Justice League: Throne of Atlantis, you would never guess that this was an Aquaman movie, right? Cringe! Poor Aquaman; after years of riding seahorses and chumming it up with the bottom-feeders, it has become a priority of DC Comics’ head-honcho and Justice League writer Geoff Johns to legitimize the Atlantean.  Adapted from the third story arc in the New52 Justice League series, Throne of Atlantis is a serviceable version of the story that really gave Arthur Curry his mainstream love. However, the DC Animated team really plays it safe by relying on the entire cast to tell the story.

In itself, that is not a bad quality. I love that there are several different stories building up. It has been some time since the events of Darkseid’s defeat in Justice League: War transpired, and there was plenty of source material to feed into this new movie. Aside from Aquaman, who was noticeably absent from War, the story focused on: Superman and Wonder Woman’s newly kindled relationship, Cyborg’s acceptance of his new body, and a whole lot of Ocean Master (Aquaman’s brother, Orm) and Black Manta. All interesting storylines in their own right but seem to take too much attention from a movie that is supposed to be centered on Aquaman, which is a shame, because as a character, Arthur Curry is a lot of fun to watch.  This version of our Aquaman is completely oblivious to his Atlantean pedigree. He meets his future wife Mera and dons his traditional armor for the first time. So, for a story that is essentially Aquaman’s origin story, neatly tied in a bow, it really shoots itself in the foot – repeatedly.

Let’s be honest – kids don’t read Aquaman by the masses. This film was supposed to be the introduction of Arthur Curry to a new generation of children, but holds itself back from being successful at that. The feature is littered with curse words and is just as brutal as Flashpoint Paradox – that may be attributed to director Ethan Spaulding, who contributed to great American anime Avatar: The Last Airbender (and Korra, too). Honestly, the fight scenes in Atlantis are some of the best I’ve seen in any DC Animated feature. At the same time, though, there are scenes in the movie that take you out of the moment by being too corny. It made it difficult to tell who the target demographic really was for this movie.

The movie isn’t all bad, no sir. The voice cast that DC Animated puts together gets more and more impressive each time. The core team from War is back, with Matt Lanter (Aquaman) and Samuel Witwer (Ocean Master), who coincidentally – or not so coincidentally – voiced Anakin Skywalker and Darth Maul from Star Wars: Clone, respectively, rounding out the already stellar cast. Other nerdoms represented here are Harry Lennix (Dollhouse’s Boyd Langton) as Black Manta and Cedric Yarbrough (The Boondocks’ Tom DuBois. The team has only been together for one movie, and there is already great chemistry. One of the best and most natural scenes was when Nathan Fillion’s Green Lantern gets braggadocios with Jason O’Mara’s Batman, capturing the bad guys without thinking the plan through. It embodied the entire state of the Super Seven, I mean Justice League, up to that point. There are also a couple neat Easter Eggs in there that, ahem, “Steel” the show. I slay myself.

One of the biggest risks Throne of Atlantis takes is toying with Aquaman canon. While War was tweeked just enough to mix things up, Atlantis was completely upheaved in the interest of re-introducing Aquaman to those who had not read about him in the comic books. In the long run, it pays off. Everything is tied up in a neat little bow, and Aquaman somehow becomes the hero. In many ways, it’s just too convenient to be believable. A lot of that is accredited to the fact that Aquaman feels like a side character in his own movie. That’s not to say that the movie is unenjoyable; I thought it was a very enjoyable watch, and the fight scenes here were even better than Son of Batman. However, a lot of the authenticity that made Aquaman an enjoyable character – no, seriously, is parodied even further by the movie’s lack of depth. We all know that Aquaman is nowhere near as cool as Batman, but if you’re going to have the balls to do an Aquaman movie, there’s no half-assing it.

IF YOU LIKED THIS, CHECK THESE OUT:

Batman: Brave and the Bold is an animated series in which Aquaman frequents. He may be a goof, but dude knows how to whoop some ass. Check out “Evil Under the Sea,” specifically.

The 2006 pilot for Aquaman (Mercy Reef), a CW series that was never picked up as a series; bad idea or just bad timing? It is available for download on iTunes and starred Justin Hartley.

Justice League: The Flashpoint Paradox features an alternate version of Aquaman, one that becomes emperor of the seas, and engages in an apocalyptic war with Wonder Woman.

NEXT FOR DC ANIMATED:

With DC Animated decisive move to include more New52 continuity in their expanding universe, we will journey to a point right after the relaunch with  Batman vs. Robin. Last year, we got quite a bit of Batman, but this next one is going to come in with very high expectations. In an unrelated but totally related sequel to Son of Batman, Batman and the newly minted Robin will be going through some growing pains as the new Dynamic Duo. What I am most excited for is the animated debut of The Court of Owls and the Talons. From the previews, it seems as though this will be some weird blend of Batman: Court of Owls and  Batman & Robin: Born to Kill, the former of which features a killer who bonds with Damian by appealing to his time in the League of Assassins. Batman vs. Robin debuts on April 14th.