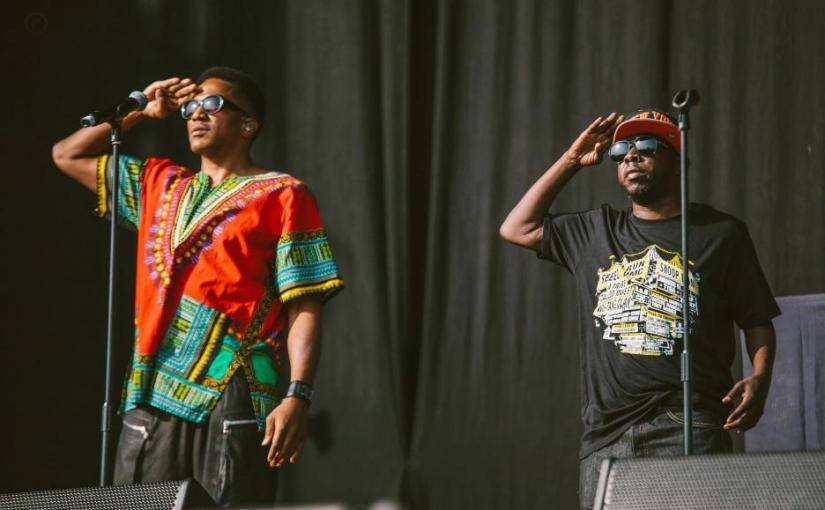 Lyric: “I have a quest to have a mic in my hand/ without that, it’s like Kryptonite and Superman.”

In honor of Black History Month, we wanted to change it up a little bit and look at some of the artists that really contributed to the culture inside and outside the booth. Well, today I am here to try to bring back some of those hip-hop glory days by introducing A Tribe Called Quest to D.T.C. with their song “Award Tour.” Released more than twenty years ago, “Award Tour” has withstood the test of time with it’s catchy hook, jazzy beat and wise lyrics. Released off the Hip-Hop classic album Midnight Marauders in 1993, “Award Tour” was smack dab in the middle of the Native Tongues movement.

The Native Tongues were a group of progressive Black groups and artists (namely Tribe, De La Soul, Jungle Brothers, Queen Latifah, Mos Def, and much more) that often collaborated in their work. Hip-Hop has had mega-groups like this before, but in the commercialist explosion of the genre in the late 1980’s, it was hard finding a groups with a positive message. A Tribe Called Quest embodied the movement, with songs about racial equality, treating women with respect, and having good, clean fun. Oh, and did you know that Phife Dog and Q-Tip, two of Tribe’s founding members, are huge nerds??

He might be Superman on the mic, but off of it? I can tell you this for a fact: the only thing weaker than Superman drowning in a pool full of Kryptonite is an MC without his mic. Without such tools, a person of poetry who has lyricism crawling through their bones is powerless to change the world around them. However, let’s switch it up and take a look at the rapper that does possess the almighty mic. A power so strong that Thor and his hammer can only wish to idolize it, a bond so deep and true that Superman’s X-ray vision can’t see past the first few layers, a passion so unrelenting that Poison Ivy can’t help but to succumb to its desire. To the rappers that started revolutions and what it meant to be a hip-hop mastermind that spoke to and for the people, that is what hip-hop heads view a rapper and his mic as. And that is exactly what Phife is saying in this particular lyric.

Only with that ability to make music and share it does he feel powerful, whether it be to make music that others relate to, or to shine a light on issues that other previously couldn’t relate to. All of this sounds dramatic and over the top, but I guarantee you, it’s fact for those individuals out there that can recite every line to “Award Tour.” It sounds an awful lot like being a superhero to me. For those of us who are unfortunate enough (or fortunate depending on how you look at it…those are scary places sometimes) to live in Metropolis, Gotham City, or any other city or planet thriving with super-beings, sometimes that music playing in our heads is our Superman. Everybody has their Superman; you just need to go discover what it is. For some it is their family and friends. For others it is music, movies, and books. And in this case of Phife Dog and the lest of A Tribe Called Quest, it’s being able to have the mic in their hand. What is yours?

I was a freshman in high-school when People’s Instinctive Travels and the Paths of Rhythm came out. My family had been in Denver for a few years after moving from New York, and I was desperately in need to connect with the culture we had left behind. I went from being immersed in a pure Hip Hop culture, to struggling to find b-boys and emcees.

One day, my buddy Christian popped in a tape. Back then, unwrapping album art was like opening a Christmas gift. I was amazed. Before Push it Along even began I was a fan for life. A Tribe Called Quest single-handedly gave me part of my essence back. For that matter, so did the entire Native Tongue family. Groups like De La Soul, and Leaders of the New School spoke to me almost directly. They embodied what it was like to be a nerdy street kid. Busta Rhymes’ delivery was refreshing. He rapped like an unchained beast. He was every bit a creative genius as his Abstract and the Dragon counter-part, Q-Tip.

The pair have been friends for decades and collaboration is long over-due. Q-Tip has teamed up with Busta on several different projects. We have all belted out the now classic line, “Rawr rawr like a dungeon dragon!” verse on Scenario. Q-Tip’s first solo project, Amplified, was disappointing but also featured our dragon emcee. There are some real old school gems on this project, but not nearly enough new work. Standouts like We Taking Off and Butch and Sundance will get notable rotation in your playlists. Consequently, I’m not a fan of the lead off track from this project, Thank You. Lil’ Wayne and Kanye provide slight vocals on this club friendly joint, but don’t add any flavor to the already lyrically heavy song. Personally I didn’t see the point of having them on the record at all. Anyone remotely interested in this project would be happy enough with Busta Bus and Kamaal. Q-Tip’s partnership with G.O.O.D. Music is clearly the reason for the Yeezus appearance.

The Abstract and the Dragon is a free mix tape. The tracks on this project are a mix of collaborations, previous songs from the 1990s and previews of tracks from new solo projects from Q-Tip: The Last Zulu and Busta Rhymes: Extinction Level Event 2. Busta gives narration in-between tracks to guide us through memory lane. If you never owned jean overalls and rocked one leg up, you may not appreciate this project. This mix tape is for the former African medallion wearing, Starter-Jacket rocking, high-top fade sporting, “Rap is dead now,” Hip-Hop heads. Truthfully, you should already have at least 12 of these tracks.

The album art is a tribute to the Low End Theory’s painted woman cover art. The cover was originally Q-Tip’s idea. He was inspired by The Ohio Players albums, but wanted to give Tribe an afro-centric, avant garde look. You have to admit, this would make a sick t-shirt design! 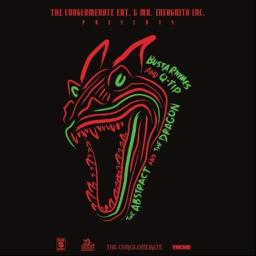 This mix tape is definitely worth the zip file. I’m glad that they collected all of their classics into one project. You can download Abstract and the Dragon here.

Hushcomics gives Busta Rhymes and Q-Tip a B- for nostalgia, but let’s hope their solo projects revisit that Native Tongue sound we all love.