When Adrian told me she wanted to celebrate Women’s History Month the same way we did Black History Month (see #AllBlackEverything) with “You Nerd Like A Girl,” the first graphic novel I wanted to review was the new Captain Marvel book. Written by Kelly Sue Deconnick, Captain Marvel has received acclaim for being not just a great female book, but a great book, period. Not to be confused with the new Ms. Marvel comic book (see our review for #1 here), a superb book in its own right – Captain Marvel follows Carol Danvers, who had been the original Ms. Marvel since 1977 until the first issue.

Okay, I can see where this can be misleading. Let’s start by introducing the newly donned Captain Marvel to most of our readers. Carol Danvers first took flight in 1968 as an Air Force pilot, and her love for flight and exploration is one of the main focuses throughout In Pursuit of Flight. She meets a Kree (advanced technological race – don’t worry about it, really) named Captain Marvel. While dealing with Kree tech, there is an explosion, which somehow melds Kree DNA to Danvers, making her one tough cookie. There is more to her backstory, including her apparent death that results in Rogue gaining the ability to fly, but that’s neither here nor there.

Captain Marvel is a modern take on her origin story with a twist. The explosion that gave Danvers her powers also consequently killed the original Captain Marvel, or Mar-Vell; how snooty of him, “It’s not Marvel, its Mar-Vell.” No spoilers here, as Mar-Vell comes back from, and returns to, the dead as a sacrifice in order to try to stop the Phoenix Force in Avengers vs. X-Men, but that is a story for another day. In memory of Mar-Vell, Danvers has cut her hair and adorned herself with his uniform, and eventually his name.

Right off the bat, you could tell that Captain Marvel was going to be all about “girl power,” and I mean that in a good way. We open up with an exciting brawl between The Absorbing Man against Danvers and Captain America. While the Absorbing Man throws all he can at the duo, they are barely breaking a sweat. Not only is Danvers running circles around Absorbing Man, but she is coming up with the wittiest lines, and commanding Captain America around the fight. It immediately sets the tone that she is not only Rogers’ equal, but in some ways superior. It doesn’t feel preachy at all, either, as Captain Marvel backs up her words by beating Absorbing Man silly.

This is just the tip of the iceberg, however. A majority of the story has absolutely nothing to do with Captain America, The Avengers, or even the current time. Marvel Comics has really been able to hit the nail on the head when it comes to humanizing their characters, cosmic super-powers be damned. After all, most Marvel characters were just normal people at one point, so why should their feelings and everyday life be ignored? By relating readers to a heroic “normal” person, it draws me in that much more to the super-strength and . Exploring Danvers’ past, before she was an accomplished pilot or superhero, Danvers’ hero growing up was Helen Cobb. Helen was cocky, with the skills to back up her claims. A “gift” from Helen somehow sends Danvers back in time – to WWII.

When Danvers wakes up in the middle of a battlefield. In the 1940s. Before we can wonder how or why, our hero is thrust into war. Who will save this damsel in distress? The answer lies in the Banshee Squad, a bad-ass group of Fly Girls. Based off women (and men) who volunteered as pilots in WWII, the Banshee Squad is every bit as brave and valorous as the men that media portrays. In fact, there is a ton of correlation between the Fly Girls and the Tuskegee Airmen; both were second-class citizen patriots who would put their lives on the line for their country. I don’t think it’s fair to say that Deconnick had an agenda, but she definitely did her homework. 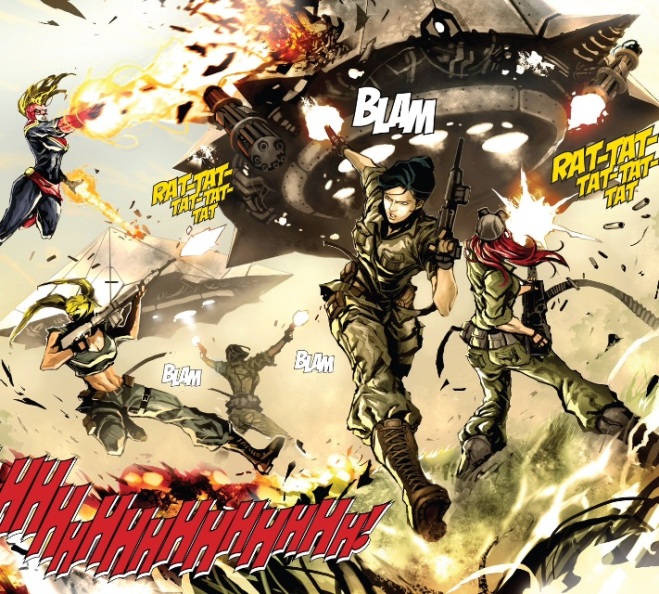 Story-wise, a lot of the time travel and reasoning had me lost, as I just wanted more Carol, and more Helen. After reading the book the whole way through, I see why the story was arranged the way it was and reveals came at the points that they did, but I felt confused by the complex plot while I was reading and it detracted by the awe of what was happening. Aesthetically, Captain Marvel is pleasing. The art feels suave and appropriate, reminding me a bit of the new Street Fighter art style – very raw and engaging. Although, there is a point near the end of the book where we switch artists that it becomes an unfair distraction to the superb writing. I’m never a fan of switching creative teams in the middle of a story arc, and this didn’t make me change my stance on it at all.

This isn’t a book for women, and this isn’t a book for men. There are no boobs, and no sappy love stories. This is the story of a bad mamma jamma named Carol Danvers and her search for her own identity. She’s funny, determined and relatable. In a time where gender-swapping popular characters, the move to a female Captain Marvel proves valuable, not just for diversity’s sake, but because her character demands your attention.

All media credited to Marvel Comics

Ubisoft is re-releasing the original Far Cry on the PlayStation and X-Box Live networks this week.  If you are the girlfriend of a gamer, you should plan on not seeing them over Valentine’s.  Just a tip.

Yoshi’s Island and the 3DS are being sold as a bundle.  Slurp!

Flappy Birds ended as quickly as it began.  So long people who won’t talk to you because they are too busy tapping their phones like madmen.

Sonic is going to be a television show on Cartoon Network.  It will be fully CGI and they kinda look weird.  Honest opinion.  Check out more here.

Batman is back.  More than likely, there will be a new Arkham game released.

Kotobukyia is pretty much the best in figures right now.  So it only makes sense that they are releasing new Arkham figures.

The Age of Ultron will feature MIss Marvel.  They also cast The Vision.  Assemble!!!

Will Smith declined to star in the Independence Day sequel.  Now how will we survive the alien invasion?!

The novel Redshirts is being adapted into a mini-series on FX.  Sci-fi nerds will have to wait for this one though, because it looks like the series still needs a writer.

A little late, but Huey Freeman will be gracing your screen again.  Season 4 of The Boondocks premieres April 21st.

Zombeavers is destined to be the film of our generation.  And the tagline is truly amazing, “You’ll all be dammed!”

Seth Rogen and Evan Goldberg are developing a show for AMC based off the comic series Preacher.

The Olympics are happening.  And its super controversial.  But take the time to watch this.