Laurel isn’t Perfect: Last week it seemed like Laurel came out of nowhere dressed in the Canary outfit and ready to kick some ass. This week, we see she isn’t actually that skilled. She gets beat up – a lot. She tries to jump onto the top of a car and falls. She inadvertently gets someone killed, and she feels awful about it. She does successfully jump onto the helicopter ladder, but not gracefully. Laurel is not going to have an easy time donning her sister’s identity. It is likely that she will eventually be as good, and probably too soon, but at least it wasn’t an overnight transformation. 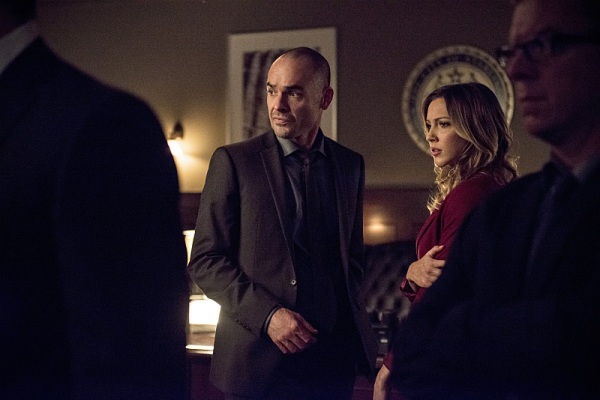 Diggle and Roy’s reaction to the new Canary: Simply put, they both think she’s dumb. After Roy saves her at the beginning of the episode, he gives her stitches, and is not gentle at all. He also informs her, “I’ve had training from Oliver and years on the streets. You have a law degree.” Right afterwards, Diggle walks in and exclaims, “What the hell, Laurel?!” Both reactions coincide with that of the audiences, and is spot on.

Roy is the Red Arrow: He may have a cool new moniker in Arsenal, but the media reports him as “The Red Arrow.” While Oliver has been gone, Roy has done a good job of stepping up in the role of Starling City’s vigilante. He takes it upon himself to watch out for Thea, confront Merlyn, and show Laurel the ropes. Roy even has a moment with Diggle. When Oliver finally returns, it will be interesting to see what role Roy will have then.

Oliver, Maseo, and Tatsu in Nanda Parbat: The three old pals in the cabin isn’t very heartwarming. Oliver is half-dead, there are lots of secrets from each other and the audience, and they get attacked. But the story line here is incredibly interesting. The tension is high. Tatsu still loves Maseo. Maseo might still love her. And they both care about Oliver. Also, Maseo went and cut his neck up to make it look like Oliver did it while getting away. That’s pretty crazy. While a little more was revealed this week, the writers are doing a good job at having the two timelines for these three converge. All will be revealed in time.

Brick City: Brick is turning out to be quite the foe. In two episodes he has wreaked a lot of havoc for our heroes and Starling City. He won’t be easily beat; in fact, right now he has more control than the cops do. His raid on the police station, ruthless killing, and reign over The Glades means he will be around for a while. A guy like that won’t just go away next week.

Thea finally says something smart: After Merlyn repeatedly tells Thea to pack up and get the hell out of dodge, Thea tells Merlyn no. Although, she does it better than that. Ra’s wants Malcolm and Thea dead, but she tells her daddy-o that Ra’s will want them dead no matter where they are. Or in other words, wherever you go, there you are.

Helicopters don’t have keys: Ok, Ray and Felicity were kinda cute this week. The banter about helicopters not having keys, then turning out that they do take keys, and the absolute need for an exo-suit was all fun and flirtatious. And if I were rich, totally relatable. Plus Felicity stops fronting and makes him the processor for the exo-suit.

The DJ isn’t useless: It looked like Chase, the DJ at Verdant was going to be useless. But then it turned out that SPOILER he is actually part of the League of Assassins. And he knows Maseo. And he is watching Thea, not just wanting to be her rebound. And the plot thickens.

Laurel is petulant: There are several times throughout that Laurel acts like a teenager. She pouts when she has to be saved and argues when her decisions are questioned.

Who is training the Canary?: What happened to Laurel’s boxing matches with Ted? And if our crew didn’t know what she was up to, how is she doing all this? 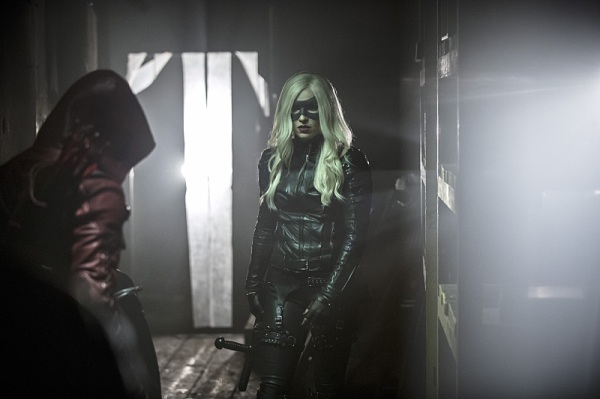 The phone call to Quentin Lance from Sara: Obviously, I am not totally sympathetic to Laurel, but I do think that if Felicity figured out how to imitate anyone’s voice through recordings, then why did they make Laurel call Quentin instead of say, Felicity. Seems like emotional torture for no reason.

Keeping Sara’s death a secret from HER OWN DAD: Things are going to be worse for Laurel if she continues to go to really great lengths to fool her dad. He deserves to know his daughter is dead.

–Nanda Parbat, where Tatsu’s cabin is, is the secret city in DC Universe.

-Dwarf Star Alloy, mentioned by Ray Palmer, is how his exo-suit is powered.

-Maseo’s League name is Sarab. There is speculation that because this means “phantom” that he will become one of many Phantoms in the DC Universe. However, I believe it means that he will die before the season is up. He is too guilt ridden over his son and in far too deep by saving Oliver.

-Belle Reve, the prison that Laurel threatens one of Brick’s men with, is the prison the Suicide Squad reside.

-Roy was called Red Arrow by the media. Now that he is making a scene for the city to see, it is likely Oliver will be referred to as the Green Arrow upon his return.

-Thea is reading a book by Brad Metzler, who also wrote “Identity Crisis.”

Amanda Waller had the Yamashiro’s son killed: Clearly the son isn’t around today. Tatsu tells Oliver that Maseo blames himself for “what happened.” We know from the flashbacks that Tatsu and Maseo left Japan because they were in danger. We also know that Amanda Waller was willing to send a fake serum to the meeting with China White. Maseo told Oliver in the club in Hong Kong that he would be willing to do anything for his family. If he becomes too much of a liability for A.R.G.U.S., then Waller will take extreme measures. With all this in mind, and since Waller never does anything herself, I believe she will have Aiko, Maseo’s son, delivered to the people who they are running from in Japan, and have him murdered. I also believe this is why Maseo is now Sarab, and a member of the League of Assassins.

Quentin will figure it out: It’s likely that Laurel won’t tell her dad about Sara’s death. Felicity told Quentin that the Arrow is gone, which seemed important enough to be repeated twice. I think Quentin will do some digging, so to speak, and inadvertently find out the truth about his daughter.

Hush Comics gives “Midnight City” a B+ because while the episode was Laurel centric, I never hated what I was watching. The flashbacks to Hong Kong and the current story with Oliver is interesting. And Felicity and Ray finally got in their groove.

All images belong to The CW and DC Entertainment.  They are credited to Cate Cameron.