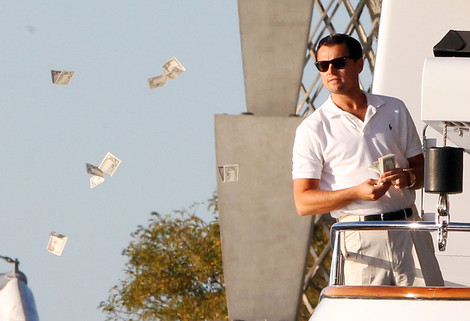 “The year I turned 26, I made 49 million dollars, which really pissed me off because it was three shy of a million a week.”  And that quote right there folks is the essence of The Wolf of Wall Street.  Leonardo DiCaprio plays Jordan Belfort, a man who ran one of the most successful “pump and dump” stock schemes in history.  By now, if you have eyes and the internet, but haven’t seen the film, you already know the movie is about filthy amounts of money, alcohol and drug use.  You probably also know its really funny.  You may have read that it has a major moral, and in other places you may have read it has no moral at all.   The “F” word is used in many varieties over 500 times.  And there are lots of naked people.  Lots.

In fact, there is so much debauchery going on in Scorsese’s nearly 3-hour tale, that a search for pictures to include in this article on Google and Tumblr probably deserved to be on the SafeSearch function. I am not shocked by much, but about 10 minutes into the movie, I had to pick my jaw up off the floor.  And it wasn’t because of the “F” word.  My guess is that Vivid Entertainment may be looking to Wolf for some pointers.  And if you are under 18, don’t look up Vivid Entertainment. 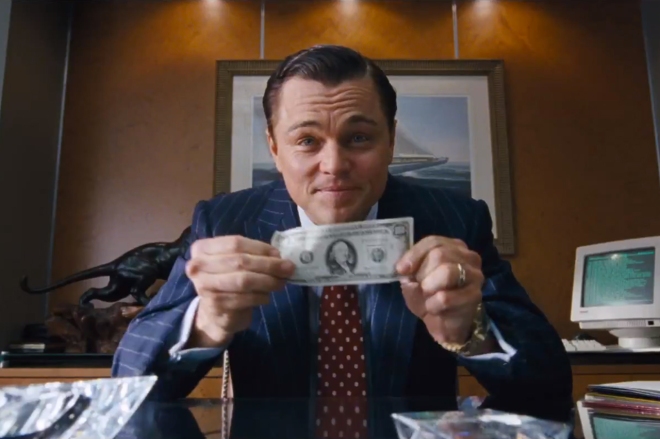 It took me awhile to judge this movie.  Mostly because afterwards, I felt guilty.  I felt guilty because I laughed through the majority of it.  I laughed at severe drug abuse, objectification of women, little people and regular Joes like me who got swindled out of millions of dollars.  And I kinda liked the people who were doing it.  Which is a testament not only to the actors and director, but to the writer.  The screenplay was adapted by Terence Winter, of The Sopranos and Boardwalk Empire, from the book The Wolf of Wall Street by Mr. Jordan Belfort himself.  And that in itself is a little sickening.  We are living the life of this criminal through his eyes, and honestly, I kind of liked it.  And if there is a moral to the story, it is that if any of us were in the position to make millions, we would.  And then we would do very bad things with it.

As far as storytelling went, I enjoyed how unreliable our narrator was.  There are parts throughout the movie that don’t make sense.  And then there are parts that do.  That is not poor planning, but rather Scorsese showing us that this man is a drug addict. And when in a drug-addled state, he doesn’t remember what exactly happened just right, and he is already notorious for not telling the truth in his career, so what reason would he have to be honest outside of the office, too?

I do have to give a shout-out to Jonah Hill.  6 years ago as I sat in a movie theater watching Superbad,  I never would have thought that he would turn out to be an A-list actor.  He was funny in Wolf, but he certainly has matured from his days of trying to hook up with Jules.  And of course, Leonardo DiCaprio deserves applause.  This is the first time he has really been in a comedy where he himself was really funny. This may be his moment to finally win an Oscar.

There were only 2 downsides to the movie, as far as movies go.  One was that I felt it was way too long.  There was a point in the movie where a major catastrophe happens, and I was ready for the story to be over, but it still had about an hour to go.  It was a long night.  The other was that after being told Jordan started out on Wall Street in 1987, we don’t have much of an idea of what year it is.  I had to assume based off a brief sighting of a picture of President Clinton in the background, but even then, it could have been anytime in the 90’s.  I felt that the other big crime-comedy out right now, American Hustle let us know where we were, the decorations, the music the clothes were so spot on to the period, but Wolf had a hard time showing us our time period.

The Wolf of Wall Street is an enjoyable movie.  But it is not one I will watch over and over because of cinematic greatness.  And I certainly won’t be recommending it to Grandma.