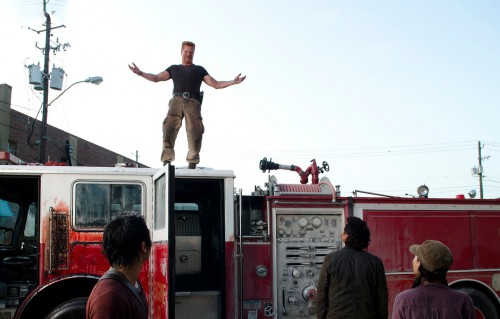 We can all agree that Season 5 of The Walking Dead has been really, really ridiculously good looking. However, I can’t help but begin to think that the show may beginning to like the smell of its own rotting farts just a bit too much. There is definitely the sense of a lack of effort in “Self Help,” and it is a reminder that this show will need to continue to bring its A game (much like last week’s “Slabtown”), and focus more on character development, exciting plot twists and bringing the spirit of the comic books to the small screen.

The formula of Season 5 has been to draw from some of the comics richest scenes, and apply them in quite conspicuous situations. So far, that formula has worked wonders. It has become standard for a show to start a season months in advance, avoiding the responsibility of filling in the blanks of what happened between seasons, but The Walking Dead has been impressive thus far by staying balls to the wall throughout each episode. “Self-Help” is about as far as you can get from that.

I’m surprised at how lame this week’s installment was, simply because of the gravity that the bad news at the end of the episode carried. The whole episode was full of foreshadowing for something big to happen, and we were entirely disappointed to find out that it could have been set-up so much more dynamically. Instead, what we get is a bunch of uncharacteristic actions taken by probably the least entertaining story of the ones TWD could have chosen from. From the get-go, “Self Help” is littered with lazy writing holes. We compiled a list of over ten instances we went, “Now why the hell would ___ do that?” A horror series can only immerse its viewers if they can give credence that an environment like that can exist and if the people within it act hypothetically believable. And I’m sorry, but choosing to chow down on toilet water when they knew there was a fire truck with water in it across the street, or wasting said water on shredding zombies. Although, that was pretty damn cool.

Where we do get some quality in “Self Help” is the fleshing out of Abraham’s backstory. I love the short flashbacks, and the polarizing topic of “did Abraham go too far?” easily sparks up a debate. Abraham’s late wife, Ellen, simply wasn’t about that life, or ready to face the harsh realities of survival. The sad end of his family’s tale ties in perfectly to Eugene’s big fat lie. There’s a lot to be said about a man willing to bust the crap out of his mangled hands just to kill some walkers – without wearing gloves. Why is Abraham in such a rush to get to DC, even while ignoring impossible odds against him? It’s a far stretch, but maybe that hand isn’t gonna be around much longer, ala [some guy in] the comic books.

Director Ernest Dickerson has directed some of the series’ greatest episodes in Season 2, including: the introduction of the Greene family, Shane’s junkyard showdown with Rick, and the Season 2 barn-burner finale – so why is this episode so painfully uninteresting? A lot of it had to do with tone; there were far too many Shaun of the Dead-type moments where the show made fun of itself instead of putting us in a suspenseful mood. Eugene is a completely laughable character, and the fact that two-thirds of voters on Talking Dead (and a herd of those on social media, too) were so shocked that this idiot could hold the answer to humanity’s end was just as laughable as his Tennessee Tophat.

Hush Comics gives “Self Help” a D+ for its zombie crawl pacing and a general lack of logic used by the characters in what should be a life or death environment. Even though we laughed our fair share at Eugene’s hilarity, there was simply no substantial development other than the obvious one to make us excited about the episode as a whole. Despite the harsh review, this episode doesn’t ruin the series, the season, or even my evening. It still opens up philosophical discussion and it still entertains. There are still tiny details for eagle-eyed fans to spot (for example, Eugene’s choice of literature, HG Wells’ The Shape of Things to Come), and mouthful of comic book lines brought to life. I’m glad the cat is finally out of the bag on this one, and we can move forward.