“The Grove” follows a similar formula to the last few episodes; where we slowly build a journey for each of the groups that have split after the mid-season finale. It’s served a good purpose of individually developing the characters, but it hasn’t pushed the story along at all; you’ve either loved the past six episodes or you hate them. It’s a style that’s heavily popularized Game of Thrones, where multiple parties push towards an inevitability (Terminus/Sanctuary in TWD‘s case), but the journey there is what drives the inching story.

Starting out the episode is a lot of small talk: Tyreese’s cut on his arm, Lizzie playing I Spy, and a lot of commentary about how Mika doesn’t have a “mean bone in her body.” We even get a bit of comedic relief by watching a walker fall down. Really though, this week’s episode of The Walking Dead stank of death from the moment it started. We join our makeshift Brady Bunch (Tyreese, Carol, Lizzie and Mika) as they settle down for a while inside of a house right off the tracks to catch their breath. Yeah, that worked out greeeeat, guys. 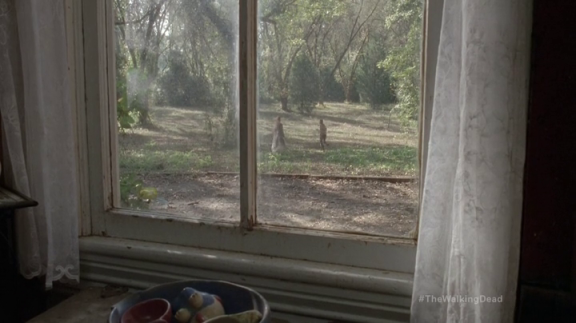 To spoil or not to spoil…. ugh such a tough decision. SPOILERS, it is! We’re gonna toot our own horn here, as we called the dramatic outcome of this episode a month ago. Lizzie has just become such a handful emotionally to deal with, and the resurgence of Carol and her “do what has to be done” attitude spelled certain doom for Lizzie. After she almost murdered baby Judith in “Inmates,” there are so many things that foreshadow the death of Lizzie and Mika. Hindsight is 20/20, but here are a list of the times, in this episode alone, that spelled R-E-D-R-U-M for Mika:

Even baked pecans cannot quell Lizzie’s bloodlust. Her twisted, constipated mind believed that walkers were people inside. And she went to abhorrent measures to make her point. What I love about the scene – sorry, that is a poor choice of words; there is nothing satisfying about the scene… what I appreciate about the scene is how well it mirrored the scene in the comics books. Aside from the Michonne/Governor scenes, these were the most horrifying pages in the entire series. In issue #61, brothers Ben & Billy were in a similar situation – they had lost their father (Lizzie and Mika lost their father, Ryan, in “Infected“), had been adopted by Dale and Andrea, and had ended with Ben standing over Billy’s massacred body.

The reaction that Carol and Tyreese have is much different from the book, and all the more powerful because of it. The comic book parents, Dale and Andrea, have no idea how to deal with the slaughter, sheltering Ben from the rest of the group (not well enough). However, the show takes the most difficult road possible, and “does what has to be done.” It’s an especially strong move seeing as Tyreese is standing nearby, holding a baby and watching on as Carol did the deed. The actual mercy-kill is one of the most saddening things in the whole series. The complete Of Mice and Men inspired execution of Lizzie was a poetic ending for a misunderstood, but dangerous, character.

The conversation between Tyreese and Carol in the woods was a poignant moment in the episode.  While it is a nice sentiment that one day this will all be over, Tyreese sees the it for what it is.  The world is haunted, and there is nothing they can do to change that.  The walkers will be there when they die.  And it will be hard to forget all the things people did and had to do in order to survive.  It was an appropriate reflective moment about survival and afterlife for the show.

Carol has grown more than any other character in the series – from battered wife to emotional rock. Overwhelmed with it all, she even decides to tell Tyreese the truth about Karen and David. She slides Tyreese the pistol and tells him to “do what he’s gotta do” – it’s kind of a theme here. Tyreese, of course, forgives her. They head off together down the tracks and back on the route to Terminus. This was definitely a growing issue for Carol, and hopefully whoever left the Peletier bandwagon in the mid-season can hop back on.

The loss of Mika hit extra hard, as she had been indirectly and directly compared to Sophia throughout the fourth season. She is now 0/3 in keeping children alive, so I’m hoping this brings out a badass-ness in Carol we haven’t gotten to see in some time. Judith has Tyreese and Carol, but who will take Griselda Gunderson? Doesn’t this world already have enough orphaned dolls?

Hush Comics gives “The Grove” a solid A. The emotional maturation of Carol and Tyreese gives Walking Dead fans something to chew on until we all reach Terminus in the finale (I mean, what else could the finale be alluding to?). Where previous episodes have straddled the line between filler and fundamental development, “The Grove” remains safely on the correct side. The Walking Dead also continues to push the envelope with sick new ways to show off walkers, this week with walkers that have been char-broiled from the house fire (we can only assume it’s the same house that Bethyl set ablaze in “Still“). With only two episodes left, we will turn our attention to “Us” next week. Just like in the first half of Season 4, I’m fearing that they will speed up everything, sacrificing for a logically consistent finale. We’re optimistic, though, that the road to Terminus will keep us on our toes.

Photo from Of Mice and Men film credited to MGM Studios.