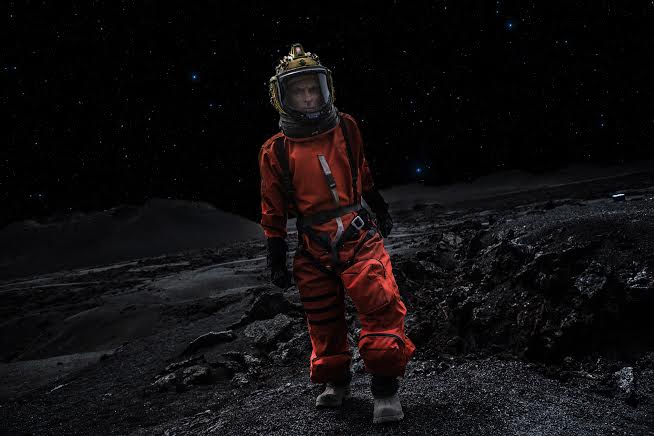 If you read my review last week, then you know that I was not too excited for this episode and having schoolgirl Courtney Woods tagging along with The Doctor. Well, I’ve got good news and bad news. The good news: Courtney does not play a huge role in the episode and is pushed to the back of the scene on multiple occasions. The bad news, when she is on screen, she says the stupidest things at the most inappropriate times. The episode itself was…interesting, not always in a bad way. We start out on the Moon in the year 2049 and Clara is sending a message back to Earth. She’s asking the people of Earth to help her to decide whether or not they should risk the future of mankind or destroy an innocent life. Obviously, we’re seeing something that will happen later in the episode. We then cut to the present where Clara and The Doctor are walking down the halls of the school and Clara is scolding The Doctor for taking Courtney up in the Tardis and for telling her she’s not special. All Clara wants is for him to tell her she’s special, but, The Doctor doesn’t really understand what she’s asking or why. I love how aloof he seems now, claiming not to remember Courtney until Clara reminds him about the vomit. They walk into the Tardis and Courtney is messing around with stuff, The Doctor shoos her away and the three of them get into a heated argument over why Courtney is special. The Doctor finally concedes and asks her if she wants to be the first woman on the Moon, and he takes them to the Moon. They end up landing inside of a space shuttle that is about to land on the Moon. Once on board they see dozens of nukes lining the cargo hold. This of course terrifies them.

It’s at this point they meet the crew of astronauts, Captain Lundvik (Hermione Norris) and two others. After a short, heated exchange the astronauts decide to trust The Doctor. He then pulls out a yo yo and asks why there is so much gravity on the Moon. He eventually works out that the Moon has grown and therefore it’s gravity has increased. This has had disastrous effects on Earth with the tides now destroying coastal cities and lots of people dying. They make their way out of the shuttle where Courtney really is the first woman to walk on the Moon, she immediately proceeds to bastardize Neil Armstrong first words on the Moon. I’m not even going to repeat it; you’ll be stupider once you hear it…another reason why kids should not travel with The Doctor! All six of them make their way to a mining camp that once was home to four Mexican miners. As they approach, they notice that it is covered in what looks like cobwebs. As they explore the base, Courtney discovers a body that has been stuck to the wall with the cobweb stuff. The Doctor hacks into their computers and finds out that they didn’t find anything of value there. He also discovers that the Moon is growing and therefore falling apart. In the meantime, one of the other astronauts is out exploring the terrain when he hears something and goes in to investigate. Hold on, isn’t the Moon supposed to be devoid of life? Why the hell would anyone move towards strange noises? It’s TV, that’s why. Anyway, the astronaut is immediately attacked and killed by something. 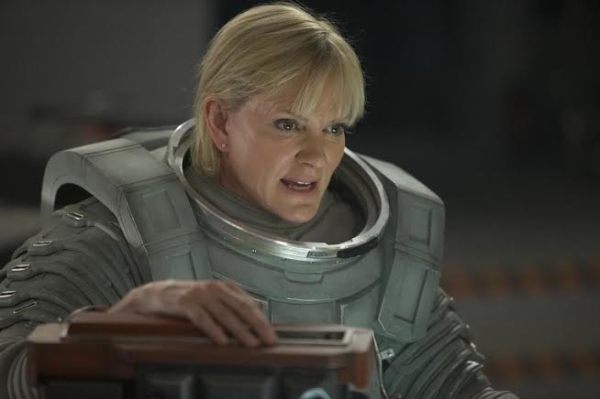 Back at the camp they’re all sitting around talking when they hear what sounds like screams and walking. Suddenly, what looks like a giant spider walks into the room. They all run away and The Doctor tells them to freeze, that it won’t see them if they move slowly. So, they slowly head to the exit. That’s when the third astronaut bumbles into the room and the spider leaps on to it’s face Alien style and kills him which allows everyone else to escape. During their escape, and, I’m not sure if it’s because I’ve missed it on both viewing occasions, or it’s truly never explained, but, Courtney starts floating and the spider in bearing down on her. The Doctor uses his yo-yo to bring her down, but, the spider is there, and again, inexplicably, Courtney has a bottle of disinfectant which she sprays on the spider and kills it. This was truly the strangest scene in this episode. I was utterly confused the whole time and I really hope that I missed something. Either way, the disinfectant basically dissolved the spider and The Doctor notices that it’s not a spider at all but a single celled organism that has just evolved to have a similar appearance. It’s at this point that Courtney has had enough and wants to go home, and this does not sit well with The Doctor. He reluctantly, but without much argument, takes her back to the Tardis. While there, Clara asks why they can’t just leave, after all, she’s been to the future and the Moon was there. This conversation annoyed me because we’ve been through this already, Clara’s been through this already. We all know that the future can be changed. It’s almost as if ever since she fell in love, she’s started forgetting things and losing interest in The Doctor and the Universe. They eventually come across the remaining miners,  all of whom are dead. Suddenly, The Doctor is attacked by one of the spider-bacteria and it is only scared off when they shine sunlight on it. They shine a light down into the crevice it retreated down and see tons of spider-bacteria things. It’s disgusting. 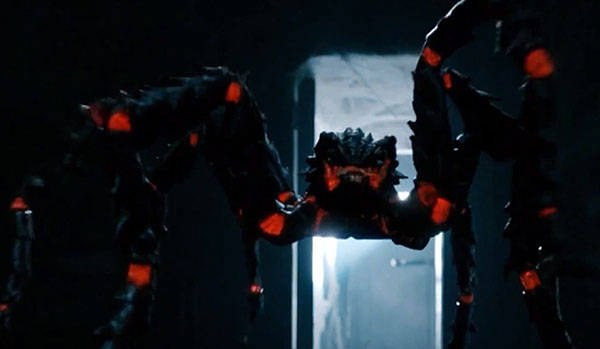 They make their way back to the mining camp again where The Doctor has established a communication link with Courtney in the Tardis and has figured out what is going on. The spider-bacteria are infesting the Moon. This can only be possible if the Moon was alive. He shows everyone a hologram of the Moon and then, what is inside. What they see is a massive winged creature. The Moon is actually an egg and it always has been. The Moon is not growing; it’s hatching, and they have 45 minutes until it completely hatches. Lundvik wants to kill it and everyone else objects. Suddenly, Courtney has a change of heart and wants to come back, so the Doctor explains to her how to get it back to him. While she does that, The Doctor explains to Clara that he cannot help, that it is now up to the three of them to figure it out. The Tardis arrives, Courtney gets out, The Doctor gets in and leaves. Clara, Courtney, and Lundvik argue over whether or not to kill the creature. Lundvik arms the bombs and sets the timer for 45 minutes, if they can convince her otherwise or if The Doctor comes back, she’ll turn it off.  Lundvik’s argument is sound in that they don’t know what the creature will do once it hatches, that there will be giants chunks of the shell flying towards Earth. Clara and Courtney are concerned with with destroying an innocent life. As they argue, a transmission from Earth comes through using their television satellites. Clara has an idea and broadcasts herself to everyone on Earth. This is where the opening bit comes full circle. Clara asks Earth to help them decide, she explains the situation and ask for them to turn their lights off if they want to kill the creature and leave them on to let it live. I find it interesting to think that Clara and Courtney were probably alive on Earth at the time and saw the message. Must have been strange for their future selves to see that and know what was about to happen. They wait and with five minutes left, the Earth votes, and they vote to kill. Clara respects the decision or so it seems, right as Lundvik is about to push the button of no return, Clara intercepts and turns it off. Immediately, The Doctor shows up and tells them all to get in the Tardis and takes them back to Earth to watch it hatch. 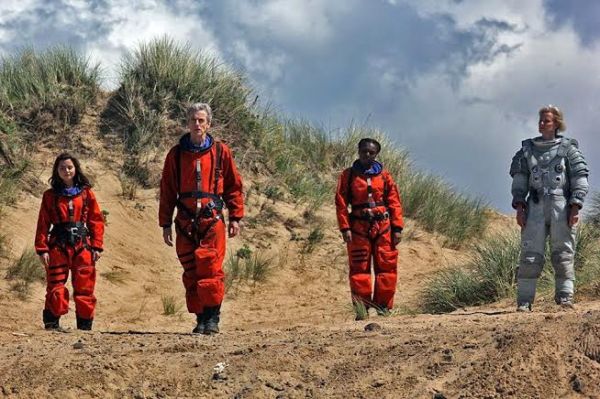 What comes out is a gigantic four winged creature, the Moon does not break up into huge chunks that would cause dinosaur level extinctions, but, disintegrates. The creature does not attack Earth but merely lays another egg and moves on. Wait, what!?!?! Lays another egg….ugh…annoying. That’s why the Moon is always there in the future, and since when does a newborn lay eggs? I’m no biologist, but, I’ve never heard of that, but, it is an alien I guess….They then leave Lundvik alone, on a beach, 2000 miles from NASA, oh Doctor, you just don’t care. Once they arrive back in their own time, Clara hurries Courtney out of the Tardis and back to class. Clara needs to have a word with The Doctor. She is not happy that he left them their alone. She says that she almost didn’t stop the bomb and blames him for that. He tries to explain that it was a compliment, that they don’t need him to be amazing, but Clara finds that incredibly rude and patronizing. Clara tells him to leave and to never come back, he tries to plead his case a little, but, Clara wants none of it and insists. He leaves. Clara goes back to her classroom when Danny comes in and notices she’s upset. He realizes The Doctor has finally pushed her too hard….kind of strange it happened the episode after he told her to tell him when it did. She tells him the whole story and claims to be done with The Doctor, but, Danny knows better and says she won’t be over him until she’s not angry anymore.

This episode had it’s problems and was barely better than last week romantic romp. I’m still glad that Courtney did not have as a large a role as previous children companions have. I thought that the spider-bacteria were very scary. In fact, one of my favorite things this season has been the bad guys, they’ve all been rather terrifying. I appreciated the yo-yo reference as the 4th Doctor was known for carrying a yo-yo around. I felt that this was another poor showing from Clara and am worried that love has made her a less interesting companion. The companions are always better when they’re not tied down to something back in the real world. This episode gets a C+ from me.  It would be higher if not for Courtney’s multiple facepalm moments. Let us know what you thought about it below!

All pictures used belong to the BBC.