I went to the movie theater this past Saturday expecting to see giant monsters destroying cities and each other. I was not disappointed in with that aspect. What I didn’t expect was the family story that made Godzilla more than just another kaiju smashfest. It’s a monster movie with heart. It actually takes close to an hour to even properly see the giant lizard.

Admittedly, during some parts of the movie, I found myself saying “Enough with this! Bring me giant monsters!” By the end of the movie, I realized that I was wrong with this sentiment. Godzilla is brought to us very much from the point of view of someone on the ground. We’re not meant to just sit back and watch terrible beasts duke it out in a random cityscape. The director, Gareth Edwards, wants to put you in San Francisco and makes you understand the real consequence of what’s going on. If you’re looking for Pacific Rim, which is awesome in its own right, you’re not going to find it here. This is more of a movie with monsters, rather than a monster movie. Gareth Edwards has done this very well before with Monsters; go rent it if you haven’t seen it.

My biggest gripe with the king of monsters is the severe under-utilization of Brian Cranston. For what you do see of his performance it is intense and heart felt. Instead of Cranston, the story follows Aaron Taylor-Johnson, best known for playing Dave Lizewski from Kick-Ass. Johnson plays Cranston’s son, who is trying to get back home to his wife and son after bailing his father out of jail in Tokyo. I’m not typically a fan of Aaron Taylor-Johnson, but I have to say he did well. I pulled for him to get back to his family.

Ken Wantanabe was solid, as usual. He gives the characters a little bit of a terrible monster history lesson. Oh yeah Godzilla, and similar creatures, have been known about since the 1940’s. He plays a very stoic and soft-spoken scientist who has been studying these types of creatures for decades. Like Cranston, Wantanabe does not receive much screen type but still delivers a strong performance. His character is fairly forgettable though. 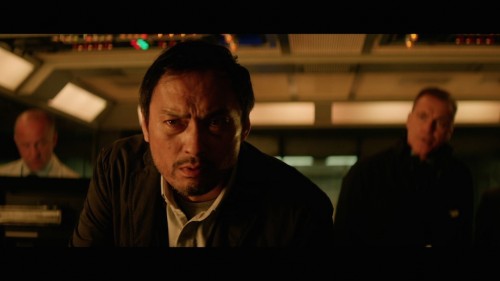 Now to the big guy. Yes, Godzilla appears to have been preparing for hibernation and has put on a few pounds. When you first see his elephant like foot come down it’s comical and exciting at the same time. It looks a little goofy but you realize quickly that you’re finally going to get the big reveal, and it’s not disappointing. I’m also very happy they stayed with tradition and kept Godzilla as the good guy in this movie. When he goes claw-to-claw with the other creatures, it’s a blast, and when you see the energy slowly build up starting in the tip of his tail the anticipation for giant laser/blue fire is palpable.

The FX team behind Godzilla did an excellent job at giving real emotion to the creatures. At certain points I really felt bad for the creatures designed as the villains. Godzilla is probably not the movie most people were expecting, and that’s a good thing. It’s deeper than what moviegoers were looking for, at least more than I was looking for. The length that the story goes to pleasantly surprised me. There were times I felt like they were just teasing me with the taste of a couple 300 foot monsters about to tear each other limb from limb; but once I realized what was going on I was satisfied with everything I got. Godzilla fights with serious brutality.

All photos belong to Warner Bros. and Legendary Pictures

Suit up Hush fans!!  Tryouts have officially started.  “Tryouts for what?” you ask!  I’m on the hunt for my neural handshake partner.  “What’s a neural handshake?” you ask .  For those of you that have already seen Pacific Rim – no explanation is required.  For those of you who haven’t (…WHY HAVEN’T YOU!!…) I will explain.  A neural handshake is the method by which two individuals dive into one another’s minds and memories facilitated and for the purpose of piloting the most bad-ass invention ever thought up by humans – a 250 foot, two-thousand ton, plasma gun wielding combat robot.  A Jaeger.  “What’s a Jaeger for?” you ask (you’re full of questions today, aren’t you?).  Well, what else is a giant battle-bot good for besides fighting monsters the size of skyscrapers.  Kaiju, is what they’re called.  So, like I said, tryouts are here and I’m sure there’s already a line outside my door.  While you make your way to that line, let me tell you why Pacific Rim may be the best movie you’ll see all summer.

Pacific Rim gets to it right off the bat.  The film starts with a brief recounting of the worlds first Kaiju encounter.  Narrated by the main character, Raleigh Becket (Hunnam), viewers are flashed images of the beast taking down the Golden Gate bridge, F-15’s being swatted out of the air like they were mosquitoes, humble citizens frantically fleeing (Godzilla style), and endless amounts of destruction until finally the Kaiju is downed by all the human race has to throw at it.  After taking down one hulking monster from the sea, another one appears some months later.  This time on the other side of the world, Hong Kong.  After more death, destruction and a slow, nearly unachievable take down of this new terror from the pacific ocean, the people of earth realize that “this wasn’t going to stop.”  So naturally, the pacific nations united, bringing together all the coolest scientists, engineers and video game experts (I assume…) and tasked them with creating “monsters of our own…”  The Jaeger program is born.  While building the walking ninja-mechs was simple enough, what proved to be the biggest obstacle in making the Jaeger’s feasible was finding pilots to guide the man-made beasts into battle.   A Jaeger is only as effective as its driver.  If one was going to hand a Kaiju’s ass back to him, they had to be able to go toe-to-toe with Mr. Miyagi in real life (the gamers wept at this news).  Not only that, but the neurological strain on solo pilots proved to be too overwhelming for sustainable implementation.  This is where neural handshakes are important.  Instead of one brain to pilot a Jaeger, two would be used.  But for ultimate effectiveness paired pilots have to be “compatible.”  Not just any two people can share all their thoughts, desires, memories, fears, and emotions and still karate chop Kaiju in the face.  Eventually the humans finally got it down, and before you know it, the pacific coast became the new battle-royale arena.  That’s where the movies starts and it only gets better from there.

Pacific Rim does an above and beyond job as far as sci-fi and action movies go.  By not wasting any time on deliberate build-up or complex plots (but having just enough to carry the story along) the audience is sucked right in from the get-go.  It was clear that del Toro and crew understood what aspects fans would be drawn to and they did an excellent job of highlighting them.  I’d wager that more than 50% of screen time included either or both Jaeger and Kaiju.  Watching the pilot loading process, or Jaeger maintenance and transportation, or Kaiju dissection is so enthralling and entertaining it’s surprising.  The scenes between major confrontations are well spent on developing characters and plot with only marginal amounts of that dragging-along feeling.  This is especially noteworthy considering the main sequences are larger than life and truly spectacular battles between machines and monsters.  Each cast member plays a pivotal role.  Each has layers that peel back over the course of the movie.  None of it is cliche and all of it makes for very entertaining moments.  I especially loved the banter between the two head scientists (portrayed by Charlie Day and Burn Gorman) as they theorize why and how the Kaiju are attacking.  Idris Elba never fails to deliver a smooth, yet in your face performance of a hardened and passionate leader.  Miss Mori’s (Kikuchi) layers are especially epic and very chilling.

Combine all the greatness of the in-between and it still doesn’t come close to Jaeger vs. Kaiju battles (which is how it should be).  These sequences were damn near perfect.  Anticipation builds to boiling levels every time a show down is imminent.  When the bell dings and the lumbering giants charge the rush is practically orgasmic.  Each battle holds new surprises.  Jaeger’s all have different abilities and weapons, Kaiju adapt and “learn” from previous battles, environment and landscapes vary.  The epic-ness is consistently epic.  The details in these scenes are icing on top of the cake (your favorite icing, I might add).  When a giant robot fist swings and misses it’s intended target (a giant monster’s throat) and careens into the adjacent office building, slamming halfway across a single floor stopping at just the right point and with just the right amount of force to start the pendulum effect of a Newton’s cradle desk ornament is applause worthy.  Speaking of punching office buildings… The collateral damage in this movie makes Man of Steel look like a glass of spilled milk.  My only grievances with this movie are the sometimes hard to follow cinematography during fights and the “dinosaur” plot twist.  Not really a twist, just an unnecessary and distracting element that doesn’t even constitute deeper thought.  All in all, Pacific Rim nailed it.

I could write all day about how impressed I was with various aspects of Pacific Rim.  This film struck a prominent cord within me and resonated so deeply with what I love about the genre that it’s taken me two weeks just to write this review for fear of leaving something important or awesome out of it.  Don’t be mislead by the overall rating I’ve given Pacific Rim.  Strict adherence to the grading criteria and personal principles indicates this movie is pretty freakin’ sweet with a rank of 85%.  On a very personal level, this film is much closer to 95% for me.  It will go down as one of my all time favorite films.  I can’t wait to see this movie again and gawk at the shear and pure awesomeness that is Pacific Rim.  Please, please, please do not miss this film while it’s in theaters.  It may not be the best movie you see all summer, but I’d be willing to bet you a movie ticket that it is probably the funnest movie you’ll see all summer (if not, all year).  Now, if you’ll all excuse me – I have tryouts to attend to.