Chances are, unless you or your family were personally affected by the Islamic Revolution in the late 1970s, those of us under thirty probably don’t know more about it than what we saw in Ben Affleck’s Argo. The revolution to get the Shah out of power was a difficult one, but it was one of the people. It was a fiery revolution by a people that had been oppressed, culminating in Black Friday, which ended up with nearly 100 dead. The revolution ended with the Shah being outed, and it also gave Marjane Satrapi the ammunition for writing Persepolis.

Persepolis, which I believe is named for the city where the 2,500th Persian Empire anniversary took place in (an extravagant celebration held by the government in a local city where people were visibly starving), is about the Islamic Revolution – and the fallout from it. The whole story is told through the eyes and ears of a young Marji. The losses that she and her family suffered bleed through the pages and you feel genuinely shocked that things like this could have happened. These were the days before YouTube, Facebook and camera phones (a la Arab Spring), so its horrors were able to be kept under much tighter wraps. 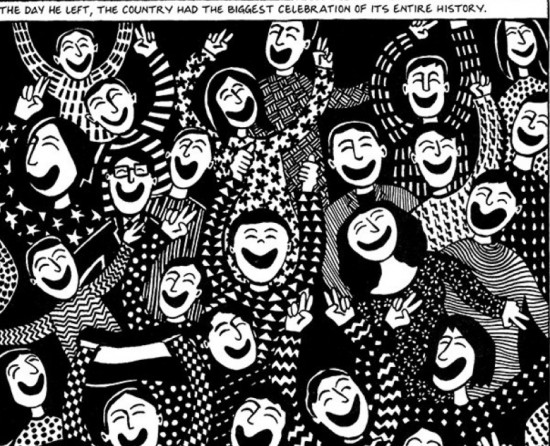 Satrapi’s character is brazen and unashamedly flawed. From “playing” revolution with her friends to realizing that her family was actually in danger when Iraqi scud missiles begin hitting her surrounding neighborhoods, Marji is always growing. She stays retable throughout the whole book, acting out like a pre-teen girl does, sharing relationships and reacting the way a girl does. Sometimes, almost to a point of awkwardness, Satrapi shares the most intimate details of her story.

The transitions also fall a little flat. On one side of the coin, I can see how skipping around from subject to subject without much pause reflects not only her state of mind, but also the state of life they lived in. On the other side, though, that style can’t bode well for a 150+ page graphic novel. Numerous characters I can’t even remember the names of were introduced, just to be executed, imprisoned or tortured panels later. There are at least two characters who definitely impact Marji’s growth. Mrs. and Mr. Satrapi are held in such esteem by their daughter. The upper-class Marxist intellectuals are Marji’s rock. They are fair, and take the time to explain the ways of the world to her, and subsequently us. Ultimately, the violence in Iran forces her parents to take drastic action that sets up the second book.

The sarcastic tone of the book and hilarious coming-of-age adventures carry it through the murder and mayhem. It’s refreshing, because it demonstrates that women all over the world aren’t too different. Satrapi might not be a war hero or a martyr like her uncle, but she’s a hero to more people all over the world for her honest portrayal of revolution, tyranny, love and loss.

All media credited to Pantheon Books