Graphic Novel Review – Birds of Prey: Of Like Minds

Think about your favorite team of heroes: Justice League (and their dozens of iterations), Avengers (and their hundred different iterations), Green Lantern Corps, X-Men… Now think about the gender representation among the group. Aside from the X-Men, women have been heavily underrepresented among the best in the universe for each team, let alone left in a position of power. Those female characters that are represented are typically typecast with revealing outfits and often find themselves “In A Refrigerator.” Well, in the mid-1990’s, Jordan Gorfinkel and DC Comics decided that readers wanted a team that they could relate to. The Birds of Prey were formed in 1996, consisting of Black Canary and Oracle. Through the years, DC’s elite women (sans Wonder Woman) have joined the Birds of Prey at some time or another. Characters like Hawkgirl, Vixen and Katana came under the spotlight of the Charlie’s Angels-esque team of strong women.

Chuck Dixon laid the groundwork for what would eventually turn into a DC Comics fan favorite. When Gail Simone took the reigns in 2003, we were already fifty-six issues in. Fortunately for readers, this was an opportune place to jump on, as Simone crafts Of Like Minds not only as an introduction to her writing, but the series, as well. Jumping into a series over fifty issues in is never an easy transition, but the dynamics of Birds of Prey is well established from the first page in. After suffering a paralyzing gunshot wound at the hands of the Joker in The Killing Joke, Barbara Gordon has become Oracle – tech extraordinaire and human calculator. Although confined to a wheelchair, Babs is the clear leader of the group and, to be honest, the most integral member of the Birds of Prey. Meanwhile, Black Canary (Dinah Lance) and Huntress (Helena Bertinelli) make the moves. Like messenger birds sent out by Oracle, they complete missions while Oracle feeds them intel.

Of Like Minds gives up a lot of ground in story-telling establish an identity. Simone does an excellent job of portraying three distinct personalities among the group. While Oracle has the notable Batman influence – prepared to do whatever is needed to get the job done – Dinah is inspired by Green Arrow’s more “Robin Hood” view of how to be a superhero. Add a fired up and borderline violent Huntress to the mix, and you get an amazing chemistry that could carry its own series whether they were fighting crime or playing Cranium. Where the arc seems to falter, though, in with the characters surrounding them. The antagonist in Of Like Minds, Savant, has just enough juice to pique my interest, but not enough to be worthy of commandeering the book. That being said, there were far worse ways to introduce a villain like Savant, and his purpose seems to be solely make the Birds of Prey look good.

Something that really impressed me about Of Like Minds was the amount of research Simone must have done to show just how legit our crew is. Take Barbara Gordon, for example. She’s no longer Batman’s sidekick, but rather one of the best most vital tools in the DC Universe for intel (really the only one until Cyborg’s rise to mainstream popularity a few years later). In fact, during Batman: No Man’s Land, which begins soon after the continuity of this book, she is crucial in Batman’s plight to take back Gotham. Throughout the pages, Babs: speaks multiple languages, quotes Benjamin Franklin and multiplies numbers together really quickly. She may be confined to a wheelchair, but Barbara Gordon uses her mind to thwart crime when her partner’s brawny methods come back fruitless. 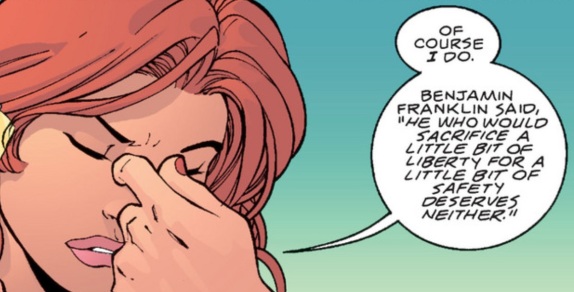 Keeping an open mind that this book was published over a decade ago, the idea of strong, capable characters is completely cut down by the way the characters are constantly being objectified. Ranging from blatant (Black Canary being bound and cuffed while Savant makes sexual banter) to subtle (putting the characters’ sexy parts conveniently next to word bubbles, and the awkwardly positioned poses to show off just enough butt to make it annoying), there’s no denying that DC was using sex appeal to sell Birds of Prey. With new-age super heroine books in the mainstream now like Wonder Woman, Batgirl, and Captain Marvel, it’s hard to imagine just how skewed the industry’s opinion of women was at the turn of the century.

While the first arc of a Simone-written Birds of Prey shows its age in terms of the portrayal of women, the identity that Gail Simone – a woman writing a comic book about women – creates is worth the sticker price (or download price, as Of Like Minds is out of print and hard to find at a reasonable price). The pages are filled with Simone’s unique take on the Birds of Prey (a woman writer portraying a female led book – crazy, I know) was unprecedented at the time, especially ones smarter and mightier than their male counterparts. I was unimpressed with the story overall, but this is a case where style over substance is more over an investment. Gail Simone shows signs of becoming a tremendously talented writer, which really shines through in her recent work on Batgirl, one of my favorite series of the New 52.

All media credited to DC Comics