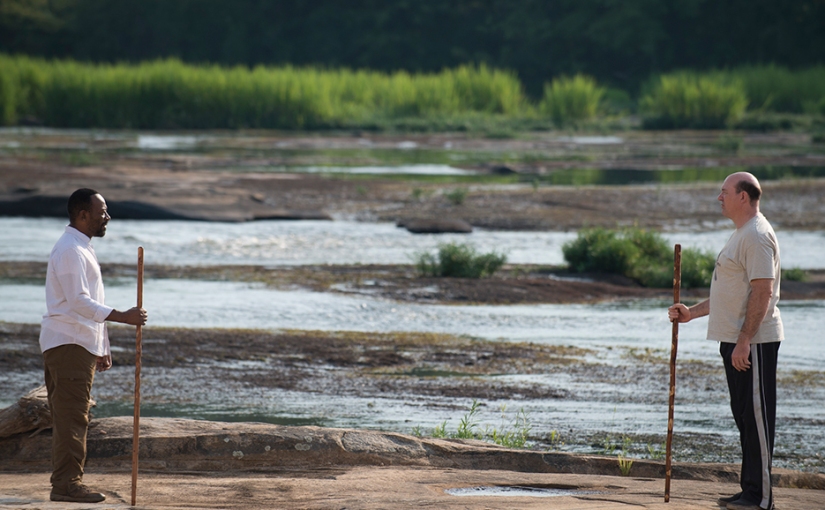 We were all thinking a few things during “Here’s Not Here”. What happened to Glenn? Why is this all about Morgan? Ok, this is actually pretty good. It’s a lot like The Karate Kid. The original. With Ralph Macchio and Pat Morita. Not the remake. And it’s also sorta like Yoda and Luke. So we are getting a derivation of the Hero’s Cycle. This is good. And it is damn beautiful. This is a nice breather from the first three episodes. That was really good, but seriously, is Glenn okay?

Alright, maybe that wasn’t everybody, that was us, so let’s get on with the review of “Here’s Not Here”.

EASTMAN!!!!: First and foremost, let’s take a moment to applaud the acting here. John Carroll Lynch, who just also happened to play Twisty in AHS: Freakshow, was just outstanding. This is also a testament to the writing; however, he had the most dialogue in the episode (and of most episodes for one man in the TWD universe), he had to embody a zen master, a man of the woods, a survivor, and a killer all in one person. It’s amazing, and we are sure there are too many other actors out there who could have brought the same ability to the episode. 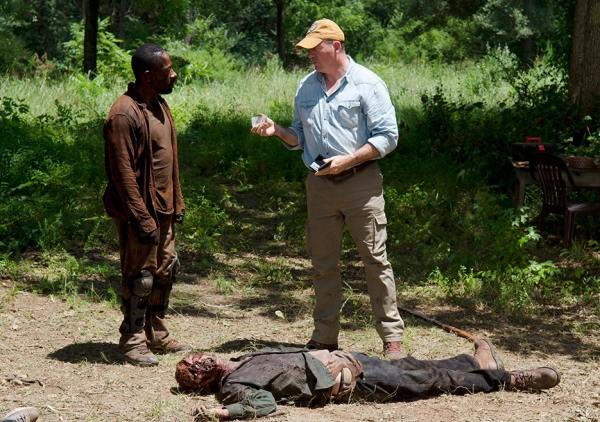 As far as the character goes, what a guy! He is absolutely hilarious, for one. When he asks Morgan “What’s your name?” and Morgan replies “Kill me,” Eastman doesn’t drop a beat and says “That’s a stupid name.” What a way to get us to instantly side with this dude. The way his story is unfolded was just brilliant. There were a lot of misconceptions the viewers could have had about him just based off his looks. But as the 90 minutes went on, more and more of his layers were peeled back. This man had more character development in that short amount of time than most characters on TV ever do. Eastman alone made the whole “what the hell happened to Glenn” thing bearable.

MORGAN!!!!!!!: Oh so that is how Morgan got this way. It took a lot of coaxing and coddling and Aikido training to get him from “Clear” to “Here’s Not Here.” The strides he made in this episode alone were significant. Again, the acting here was superb. Lennie James has by far had to deal with the most changes in the shortest amount of time. This episode showed a pretty large scope of emotions for our beloved bo staff wielder. His zen-masterness is finally explained and it was a wonderful ride to watch.

Pacing, story, and character development: While some may have thought this episode was too slow, we thought the pacing was perfect. This was meant to be the full explanation of Morgan’s ways. If his full on crazy to zen master had been rushed, it wouldn’t have been believable. Additionally, the unfolding of Eastman’s story was perfectly executed. His interactions with Morgan and the way he slowly told him (and us) about his past life including Creighton Dallas Wilton, the man who murdered his family, were everything we needed for character development. This episode should be shown to writers who are looking to advance their own skills into how to develop characters.

Call backs: The amount of thought that went into the dialogue here was mind-boggling. The re-use of Morgan’s dialogue into Eastman’s dialogue was incredibly well planned. Practically everything Morgan has said since he resurfaced in season 5 came from his short time with Eastman. From “sorry” to “I don’t have friends” to “All life is precious” it became clear (see what we did there?) that Morgan’s character plotted and that his story is incredibly integral to the overall story.

Video Game Camera: Many people may have hated this, but we personally think it was a great way to make viewers feel like they were “in his head.” Morgan’s manic state was reflected well by the blurred and shaking camera. Thankfully, it was used sparingly.

It was damn beautiful: We are pretty big fans of montages, and this episode had some great ones. The scenes of bo staff training were just breathtaking. 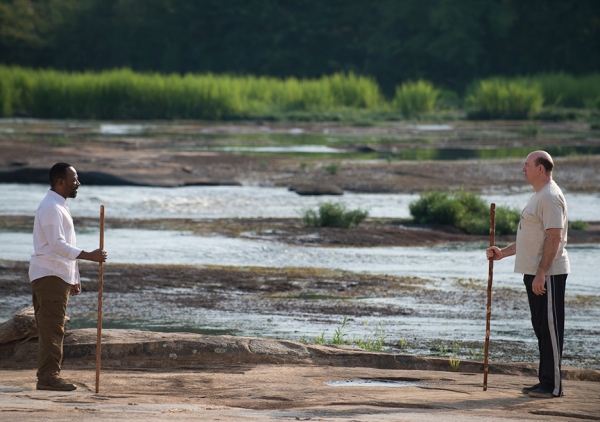 Eastman’s exit was wiggity wack: Here we have yet another plot hole we’re going to ignore because the rest of the episode was stellar. We knew Eastman had to die. There was no way a character that dynamic could live past the single appearance he was awarded, but the way he died just felt lazy. He just ran up on Morgan and shielded him like he had a gun pointed at him. He could have easily shoved the walker to the ground, or used, I don’t know, his freakin bo staff?? You could do better, AMC.

TMNT: As Chris Hardwick pointed out, there are a lot of Teenage Mutant Ninja Turtles references in this episode. Morgan has been called Donatello for a while now, but it is safe to say Eastman was the original Donatello. Additionally, Eastman is wearing a shirt with a turtle on it, and his name is Eastman, a.k.a. the co-creator of Teenage Mutant Ninja Turtles, Kevin Eastman. It may have all been coincidental, but it had to be noted.

Tabitha: She has her own fan base ya’ll. Not kidding. She more popular than characters that lasted seasons. 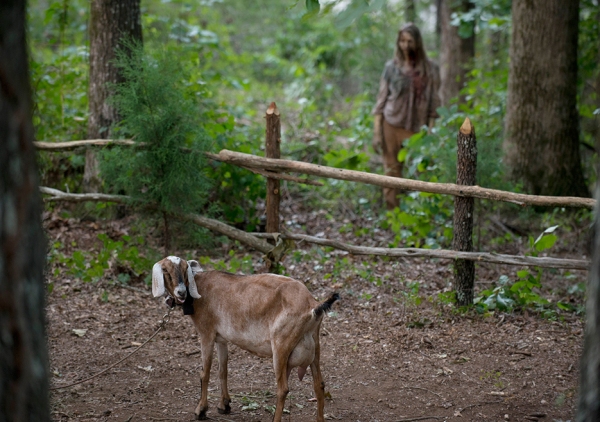 The cheese does not wear me: This is a bit of a Buffy reference. All right, it’s a full-on Buffy reference, but if you follow Hush Comics, you know we love Buffy. There was an episode in the series called “Restless” which seemed like an episode that didn’t fit with the rest of the season, but included a lot of references to things in the past and in the future. “Restless” is a cult followed episode because of all the references (and the weirdness of it). In ways, “Here’s Not Here” reminded us of that episode because suddenly there was a lot about Morgan that made a lot of sense.

Wolf in the basement? Why does that sound familiar?: Morgan is (secretly?) hiding the lone Wolf in some random basement. We’ll ignore for now the fact that this will most definitely blow up in his face somehow and focus on the jailing part. It’s a clever parallel to what Eastman did to Wilton in the story, but it’s also a distinct Easter Egg to what Rick does to [some guy] in the comic books after winning All Out War. Neat.

It took Creighton Dallas Wilton 47 days to die?: At first this fact was a bit mind boggling. Would it really take 47 days to starve to death? Welp, it turns out that this number is surprisingly accurate. Gross.

The Art of Peace: The book was written by Morihei Ueshiba who is the founder of the Martial Art Aikido. He developed the art because of three separate awakenings he had between 1925 and 1942. The Art of Peace is widely considered the book of Aikido and its spirituality, but can stand alone from the art.

Morgan is A-OK: We finally get a look at Crazy Morgan marking the trees that we see in the Season 5 opener. It makes me wonder what Morgan actually did before the apocalypse; he’s been asked a few times now and has redirected every time. What kind of normal man would go into full commando mode and exhibit the “clear” tactics Morgan did back in Season 3 (“Clear”).

Morgan and Eastman have a lot in common: Other than both being zen master badasses, of course. Morgan was for a long time a character everyone loved, but had appeared in only one episode. It wasn’t until years later we saw him again. Based off one episode, Morgan had quite the cult following. Nowadays, that title can go to Eastman. Don’t believe me? Just check out Tumblr. Below is some amazing fan art based around this following. You can see the artists whole page here.

Hush Comics gives “Here’s Not Here” an A for an incredibly brilliant and beautiful episode. The way it was filmed, the pacing of story, and the character development created it’s own standalone movie, something all TV series strive for, but rarely attain.

All images belong to AMC and are credited to Gene Page.