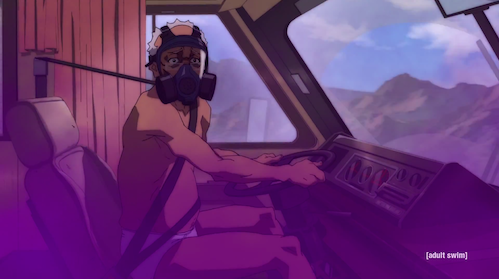 I’ve been trying to get my faith back in The Boondocks lately by trying to watch and comprehend the last two episodes, “Good Times” and “Breaking Granddad.” Like i said in my last review, I feel that this iconic show is suffering a slight fall from grace, slowly tipping off the pedestal that it has once stood upon. These McGruder-less episodes at least are enough to get a little chuckle out of me, but when the show ends, I feel like questioning why it happened at all in the first place..

The last two episodes seemed to follow an actual storyline, something I haven’t ever seen The Boondocks do before. This gave me a decent excuse to procrastinate writing for a little bit (don’t tell my editor) [Editor’s note: yeah, smooth move, Jojo]. The show normally jumps into the plot like any other adult cartoon and takes off from there. This is a rather interesting approach, bringing a different flavor to the mix. 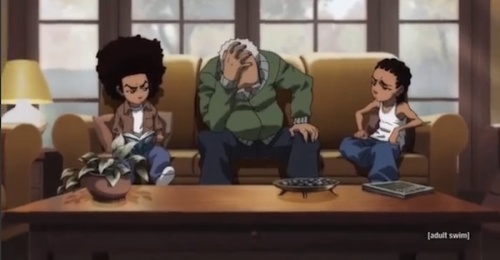 Episode two of the fourth season, “Good Times,” was all about Robert Freeman’s the fall from wealth. Having lost all his money due to poor financial education and a scheme from adjustable mortgage rates, he has found himself in a substantial amount of debt. Robert is forced to get a car wash job – already hinting at a Breaking Bad-like plot satire – under Uncle Ruckus (no relation), rent out his house to unruly guests (including guest star Eddie Griffith) while sleeping in the garage and even getting a loan from Mr. Wuncler’s mobster son. That family is no good; this episode marks the first appearance of Ed Wuncler II, and while he looks like a nicer guy than either his dad, the apple doesn’t fall far from the tree here. He tricks Granddad (not like that was a challenge) into signing a loan with 150% APR, and then offers them a way out of the millions of dollars of debt by quite literally selling themselves into slavery. 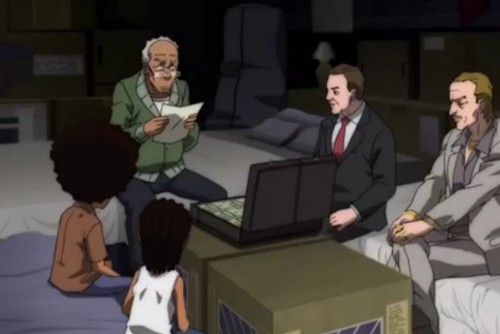 I was at least pleased to see some valid social commentary in “Good Times,” as the mortgage bubble bursting is getting the full satirical treatment from The Boondocks. When banks shoveled out high-interest, entrapping home loans to the uneducated, millions of families lost their homes. The show does a decent job of showing how imposing banks were and portrays their willingness to exploit the uneducated for monetary gain. It was only a taste of instant vintage Boondocks, though, as the show took it from a point of reflection and turned it into the butt of a poor joke – something that Aaron McGruder had a skill of avoiding.

Next, in the third episode, “Breaking Granddad,” the Freemans are suffering from the events of “Good Times.” Robert decides to go out on a date to take his mind off things, but as he gets ready to go, realizes that he has no pomade for his hair – or whatever hair the old man has left. After going on his pointless venture, he finds a substance in the garage that has the texture for hair gel and proceeds to using it. Well, turns out Huey was planning to use this “gel,” a highly explosive substance, to bomb the Wuncler’s residence to gain back their freedom. The substance has an unexpected side effect; it also grows and perms kinky hair over night.

Robert and Riley decide to box it up, sell it and reap the benefits. They eventually start getting successful in their endeavors and are bought out by a black hair “business” woman, Boss Wilona. Turns out she is actually a gang leader who is interested in the product to distribute. The product is later banned and becomes an illegal controlled substance, but the business woman insists on selling it. Eventually they beg Huey, the one who was against this scheme the entire time, to give them the ingredients to make it. He finally breaks and shows them how but they have to go to the dessert, with an RV to make this illegal substance. They meet with Boss, she double-crosses them and forces them to make more. Heis……er I mean Robert, cleverly escape the van and get away. They then walk home and that is the end, cue credits. 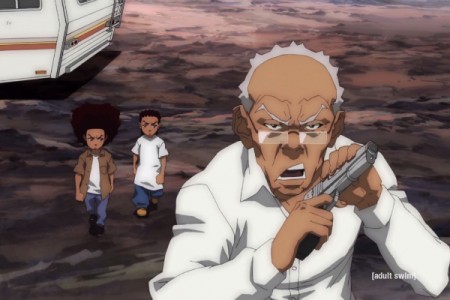 While “Good Times” presented was was a ghost of The Boondocks‘ former glory as a socio-poltically conscious show, “Breaking Granddad” was a lot more colorful and kind of reinforced the two part series kind of resurrecting the poltergeist of an episode.

Overall I still find this season lacking what made The Boondocks what it is, the hidden message. The Breaking Bad parody episode was much more bad and broken then it was Boondocks, missing the level commentary if could have hit pertaining to the black woman community and its self-esteem issues with hair. As you know hair perm has a massive amount of chemicals that should not even touch skin, but apparently a majority of black women would risk this in order to have that long, beautiful Euro type hair that is all over TV and movies.

The episode, although slightly informative, kind of reminded me of every other adult cartoon out there, choose a piece of highly popular pop culture and base elements of the episode on it for more views. I don’t entirely prefer this tactic or I’m just a little sick of it as I see it all the time. Setbacks aside, this is no reason to give up on the season and I’m in it for the long run. VIVA LA Boondocks Season 4… I guess.