Last Week Tonight with John Oliver has done one thing for Americans who subscribe to (or steal) HBO: made them feel down right stupid.  Me included.  But you know what is so great about that?  John Oliver gets to educate us on our own country, and many other countries, too!  Being British makes him sound automatically smarter than us young Yanks, but there is a lot of research to back up his exposés.  Thanks to John Oliver, I now know about FIFA, mass incarceration, payday loans, beauty pageants, and of course the Russian Space Sex Geckos.  It could be construed as a comedy, but John Oliver and crew are masters at educating through humor, and sometimes, even doing something about the issues they have talked about. – Adrian

DC and Marvel have been duking it out on the big screen for years now, but this year DC has declared an early victory in the battle of the small screen. Jumping off the success of Arrow, the CW’s newest superhero show, The Flash, made its debut in November. Since then, the series has introduced a butt-load of DC characters – and hinted at even more to come. I love this show because it has BALLS.The Flash is still susceptible to the “that’s so C-Dub” tropes, but it has an enjoyable cast, impressive special effects, and more Easter Eggs than we know what to do with at times. After only two months, The Flash can already keep pace alongside Arrow. – Sherif 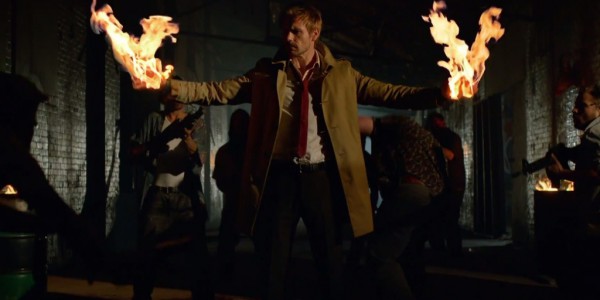 John Constantine is one bad man, and it’s about damn time we get a television show that shows us that. The best way I can describe the show Constantine is that it’s the guy version of Charmed, but much more terrifying. Or a way better version of the 2005 Keanu Reeves movie. The show itself has even dug itself out of an early grave, as it was handed the time slot most associated with shows sentenced to death – Friday nights. Anybody with a social life or without a DVR was almost guaranteed not to be able to catch Constantine, so the fate of the series rested on the hardcore fans of the demon hunter. In spectacular fashion, the voices of the fans (and a surprising amount of casual viewers, as well) convinced NBC, the same jerks that canceled Community, to move the show to a more feasible time slot. So there’s one demon down; now they just have to get renewed for a second season. – Sherif

RUNNER UP – How to Get Away With Murder (ABC)

Well, I’m not surprised us at Hush felt that How to Get Away with Murder was one of the year’s best shows. For me personally I was hooked by the first episode, and since I don’t have a television, I found every which way possible to watch it as soon as it was available. I never hit fast forward and always found myself hovering at the edge of my seat holding my breath. I was riveted by the storyline, the characters and the nature in which everything unfolded. And I was honestly and genuinely surprised by the mid-season finale. What I find most intriguing about the show is how it articulates its reality and the ways different characters deal with murder. The emotion is raw and intense and at times hard to stomach, not to mention the sexy-time is wonderful. If it’s not a show on your watch list it should be. Binge it right away so you’re ready for when it comes back. Because we are all wondering what is to come next for all of these dynamic characters. – Jené

I’m not going to lie… new TV this year was pretty bad, but somewhere near the top of this pile of suck is Gotham, a show all about the humble, murderous roots of Batman’s hometown.  Joy!  Kinda.  As my brother so aptly put, “it’s a show about Batman without any Batman.”  That’s not completely true.  Adolescent Bruce Wayne is a part of this show, but this series focuses primarily on Jim Gordon pre-Commissioner title and his police partner Harvey Bullock.  The show had its moments – mostly anytime Robin Lord Taylor (Oswald Cobblepot aka The Penguin) was on screen.  Strung together by a series of fairly unrelated events and peppered with B-list (maybe even D-list: Balloon Man?) villains, Gotham provided mild relief from the boredom plaguing Monday night primetime.  It wasn’t a bad show.  It wasn’t a great show.  But for trying something new and delving into the DC universe, Fox and Gotham get props and for at least an earnest attempt at creating something special. – Taylor