Howard the Duck started out in the pages of the comic titled Adventure into Fear #19, which was released in 1973, as just a small cameo in the larger story about the character Man-Thing. In fact Howard would only be known for being in Man-Thing books for the next couple years because after the Adventure into Fear series ended, Howard got his own back up feature in Giant-Size Man-Thing.

During this short run, Howard usually faced off against horror parody characters who most of the time were even more ridiculous than Howard himself, including another favorite of mine, Man-Frog. You got to try and make an alien duck not feel too weird, so why not throw him in with the weirder guys to make him look … normal? After all, Howard may have had humor but he was not just some throw away character because soon after the Giant-Size Man-Thing ended, Howard got his own series that got rid of the horror parody characters and focused much more on making him a substantial character for Marvel Comics.

It was 1976 when Howard finally graduated from the ranks of Man-Thing and got his own running series. This self-titled series ran for 33 issues and one king size annual, and most of this series was actually written by Steve Gerber who is one of the original co-creators of Howard, although the artist Val Mayerik did not return and Gene Colon took his place for most of this series.

This initial run saw Howard battle depression and suicide, rescue sexy women, defeat dinosaurs and living statues, and even team-up with Spider–Man and all that is only within the first issue! A lot of small and yet iconic things came from this short series – especially Howard’s adventures into politics and his run for President. Across many Marvel mediums you can see “Howard for President” ads. Marvel even produced “Howard for President” pins for fans. Howard even got on the cover of Foom Magazine during this time in a wrap around cover with people like Nick Fury, The Thing, and J. Jonah Jameson showing their support.

But this series also went through quite a rough time; Steve Gerber had difficulties writing, and there were a couple of huge legal battles over creative control between Marvel and Steve Gerber and Disney complaining Howard looked too much like Donald Duck.

The writing difficulties were apparent in issue #16 a, “Special once in a lifetime album issue” that did not have any plot to it and was just musings about writing from Gerber. This issue did gain a popular following, because it was something never done before, but true Howard fans felt a little ripped off. The lawsuits were what ultimately destroyed Howard, leaving the series in hiatus for 6 years between 1980- and 1986 for it to return for just two more issues but without Steve Gerber and with the addition of pants, thanks to Disney.

The return of the comic in 1986 was released in anticipation for the one thing that has cursed Howard as being known as plain foul instead of just a waterfowl for years – the Howard the Duck film. This 1986 film, produced by George Lucas, seemed to have all the right ingredients but suffered from the recipe being written wrong in the first place. Even with stars like Lea Thompson, Jeffrey Jones, and Tim Robbins, the film couldn’t find its footing and never made it past anything but cult status. Although, even now, most people don’t admit liking the flop. Marvel loved Howard during this time and really thought he could be huge, so this was the first real Marvel Comics character to be put on the big screen with this capacity.

While the fiasco of a film was going, Steve Gerber was off doing his new thing for Image Comics and had created a character among his legal difficulties for them called Destroyer Duck. This caused even more controversy for Howard because Destroyer Duck was just Howard with guns. But this character would actually become part of a major crossover event with Savage Dragon from Image and Spider-Man and Gambit for Marvel. During this, Gerber was brought on to write because Howard was going to make an appearance and Marvel told him they wanted him to be the only writer for Howard at the time. But it turns out Howard had a couple other appearances in comics at the time that Gerber had not been invited to write, which left Gerber feeling rather betrayed. This decision brought on a whole different side to this series and made it more of a study of the behind-the-scenes drama of comics than a comic itself. In the Image Comics issue for this crossover, it was written that Howard actually stayed in the Image Comics universe and a “soulless” clone was taken back to be Howard in the Marvel universe, which was Gerber’s big “up yours” to Marvel. After this it led to Howard and his partner Beverly changing their names to Leonard the Duck and Rhonda and then dying their feathers/hair and entering the witness protection program in their new universe. This did ultimately give these “new” characters a home, as they were different enough that Marvel let Gerber keep them to appear in Image and Vertigo comics 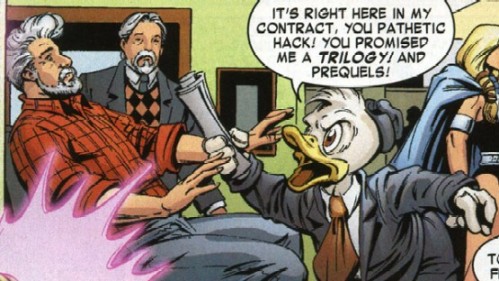 Howard did not appear very much for many years until Marvel decided to launch an adult comic line titled MAX Comics. This series actually saw Gerber return to Marvel to write Howard, but this time there was quite the twist, as he was now turned into a mouse, which was likely a dig at Disney for the previous lawsuit. This series delved into more violent and graphic themes while also staying true to the pop culture clashing Howard we saw before. This was only a six-issue limited series and didn’t gain much popularity. Oddly enough, the next Howard project was the exact opposite of this; Marvel decided to make a very kid-friendly Howard series that ran for four-issues and did not help him recover at all from the travesty of his film and the burning piles of feathers it left behind.

Marvel even gave Howard a cameo in She-Hulk #9 where he tries to sue George Lucas over the film and what Howard was promised from it during this time, showing that even Howard knew he was better than his own movie. After She-Hulk #9 and some sporadic years of cameos and short lived series, Howard had a short adventure with Generation X where he ended up saving them from the villain Black Tom by lighting him on fire with his cigar. Afterwards, he went on to have a much larger adventure with the team The Daydreamers where they traveled together through the dimensional by-ways, where they battled a Doctor Doom look alike who was really Franklin Richards repressed emotions. The latter though saw Howard get to return home to Duckworld for just a small amount of time to see he is a hero among his people and also see his parents, before it is revealed it is an illusion, sadly leaving Howard and the Daydreamers back where they started the adventure and Howard feeling a little bit more like a fish out of water when they get back to Earth.

From here, it was shorter adventures for Howard but some with a lot more meaning as he found himself involved in a lot of the major events in recent years including Fear Itself, Civil War, and is involved in multiple ways in Marvel Zombies. For Fear Itself, Howard put together a team of Himself, She-Hulk, Frankenstein’s Monster, and Nighthawk to track down Man-Thing who freaked out and went into a uncontrollable rage because of the immense amount of fear across the world. Howard’s team (The Fearsome Four) got to Man-Thing and subdued him in time to save the whole world, making Howard incredibly important once again.

In Civil War, Howard was attempting to register under the Superhuman Registration Act, but in doing so, learned that he had actually caused lots of trouble for the government with his lowlife style, so the government doesn’t even register him as a person. This overjoys Howard since it means no taxes, jury duty, or other obligations the government brings with having you as its citizen, but then in other places Howard is seen saying he was pro-registration until they said he had to quit smoking cigars, and he obviously went and joined the anti-registration side immediately.

Last but not least for these events is Marvel Zombies and the immense amount of stories spawning from that. Howard appeared in multiple stories for Marvel Zombies including eating the Bruce Campbell’s Ash in Marvel Zombies vs Army of Darkness and most notably becoming an agent of A.R.M.O.R. and teaming up with Machine-Man in Marvel Zombies 5 aka Marvel Zombies Destroy! to travel across the multiverse killing zombies and bringing back samples to Morbius the Living Vampire. Which brings us to modern times and where Howard stands now…

This last year saw a huge boost in Howard’s popularity as we finally saw his triumphant return to the big screen, even if it was just of couple seconds, in Guardians of the Galaxy. It was originally just a cool cameo thrown in because the director James Gunn loved the character. Now it has become one of the most iconic post credit sequences the Marvel cinematic universe has given us. The short cameo brought about only the second Howard figure ever to be produced with the Funko! POP figures.

And now Howard is getting a new series starting this week, written by Chip Zdarsky and art done by Joe Quinones. In the first issue, we  see a sequel of sorts to the post credits sequence in Guardians of the Galaxy, as well as establish him as a private investigator here on the good old Earth—616. So now that you know Howard’s past, go to your comic shop, pick up Howard the Duck #1 and hold his future in your hands Wings!

Howard the Duck #1 is available now at your local comic shop!

All images belong to Marvel Comics.