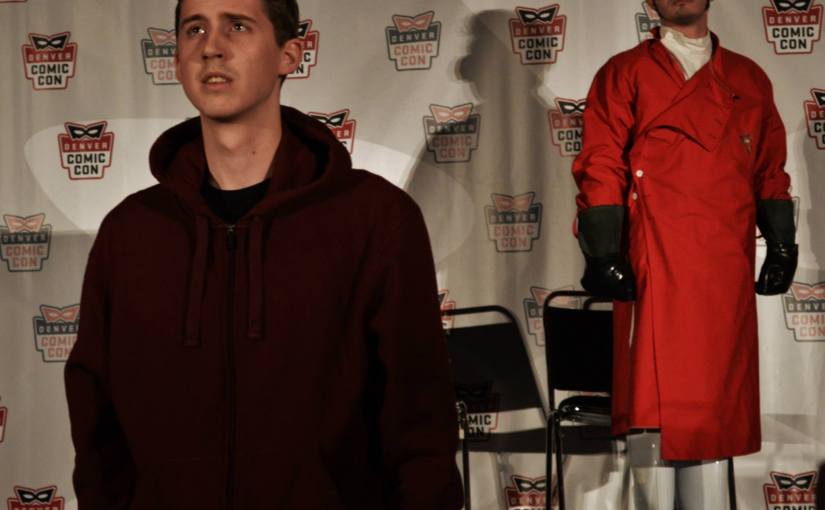 Topic: Shadowcasters silently act out Buffy the Vampire Slayer‘s “Once More With Feeling” and Dr. Horrible’s Sing-A-Long Blog while it plays in the background (similar to Rocky Horror Picture Show).

Members of The Rocky Mountain Whedon Shadowcasters hit the Main Events stage at Denver Comic Con 2015 May 23rd for the first time this year. While the troupe has performed at other Denver pop culture conventions such as Starfest, this show was by far the its biggest. Its double feature shadowcast of Doctor Horrible’s Sing-A-Long Blog followed by Buffy the Vampire Slayer’s musical episode Once More With Feeling is always a big hit at Starfest. It was no surprise when the turnout for the show was large at DCC.

The show had a very casual feel. It was all about having fun with the fans. While many actors have their lip-syncing down to a science, others simply mimed the actions of their on screen counterparts. The costumes were more approximate than dead-on and some of the entrances and exits were a little too late, but regardless of the less-than-perfect nature of the show, it is extremely fun to watch. The best performance was given by Michael Jasper in the role of Dr. Horrible whose lip-syncing was indistinguishable from the actual audio. It took audience members a few minutes to realize he was just mouthing the words. Close to follow his performance was Karl Brevik as Spike who not only embodies the character flawlessly in both his lip-syncing and movement, but is also actually British. That’s something even James Marsters can’t say! Josh Whitby also had amazing energy as both Captain Hammer and Xander and Genae Gerardi made a wonderful Buffy. Overall, the performance was a lot of fun for any fan. There were even a few jokes for those unfamiliar with the two productions, such as an appearance by Game of Thrones’ Jon Snow as Dr. Horrible sang the lyrics “It’s not a death ray or an icebeam / That’s all Johnny Snow.”

RMWS first performed at StarFest 2009, a little less than a year after Doctor Horrible first came out. Originally organized by Michael Newman, the show started as a small panel room production without the inclusion of Once More With Feeling. “I was dressed as ‘Dead Penny’,” says now director Erin Card who met her husband through the show. “[he] was one of the Doctor Horribles… and [the other cast members] were like, ‘Hey, Penny, come on down. Act this out!’ ” The first production had only five cast members. From there, Card became an integral part of the production, the role of director being past down to her. Later on, the cast would come to Card asking to add Once More With Feeling to the show. Having never seen BTVS at the time, Card was hesitant to include what would become the second half of the show, but ultimately decided to give it the go ahead.

“I like performing in plays, but that can be really nerve-wracking to remember your lines and blocking and to have people only watching you,” says Lara Griffith who plays Willow in Once More With Feeling. “When you are doing a performance of something you love and know by heart and the audience knows by heart and it’s playing in the background so you aren’t the only thing people are watching, it makes it more fun and easy.  Plus everyone is incredibly nice and accepting.  We’re all there to just have a good time.” And it shows. The cast of this show is from all over Colorado, which makes rehearsing difficult. This means the entire production has to come together in what is essentially one rehearsal. Card hopes to make the show even more professional as the years go on, adding more than one rehearsal into the mix and detailed choreography. She says they are always looking for new cast members, but as of now the main cast is made up of veterans of the show. There’s a general consensus that if one actor has a lead in one part of the show, they’ll have a minor role in the next. For example, Griffith plays Willow in Once More With Feeling but in Doctor Horrible plays the small role of a news anchor.

If you haven’t seen this performance, it is likely they will be back at DCC next year, or you can always catch them at Starfest at their midnight showing in Main Events. This is one of those fan productions you definitely have to see if you’re a Whedon fan. Despite its low budget look, it’s an incredible hour and a half of fun.