With all the attention that The Dark Knight receives in Gotham, you would swear that he’s the only character worth mentioning. Much like Superman has his cohorts at The Daily Planet, Batman has a small team of detectives that he trusts in the GCPD. Through the generations of progression in Batman lore, Batman’s relationship with Gotham City’s finest has been instrumental to his growth as a hero and ability to be plugged into the city. He and newcomer James Gordon forged a relationship that has been the focal point of multiple story arcs, movies, and especially in Batman: The Animated Series, and that relationship is extended to more than just the would-be commissioner. 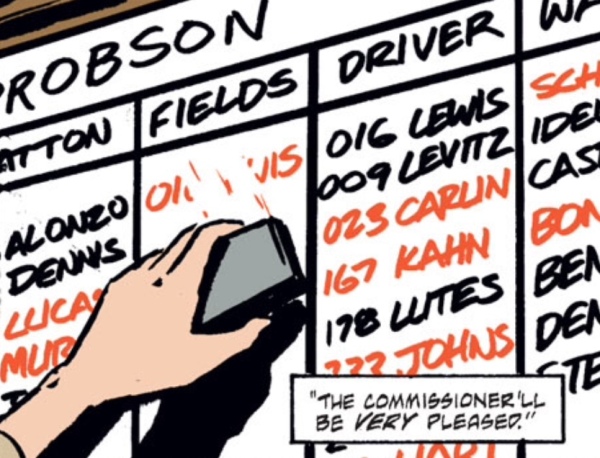 Ed Brubaker’s Gotham Central takes place after a time where James Gordon has stepped down as Police Commissioner. The GCPD has been cleaned up for the most part, and the city is no longer owned by the corrupt and the mob – although, that does not mean it is not still a point of concern. Just over a ten years ago, there were over a dozen titles that were about Batman or his constituents, so when writer Ed Brubaker pitched a title centered around the police that practically play second fiddle to a masked vigilante who wears his undies over his pants, you can imagine the concern.

The fear that a series of this nature would get tangled up too much with Batman – that it was essentially impossible to separate the Bat, and his infamous cast of villains, from making a good cop story. While Batman is an undeniable presence throughout the book, it is truly the boys (and ladies) in blue that make this series what it is, which, when you get to the bare bones of it, is a great cop drama with a Batman theme to it. From the lingo the cops use to the casual dialogue in the Bullpen, there is a very noir detective air about Gotham Central. Even the art by Michael Lark is loudly reminiscent of the old-timey Detective Comics that the publisher took their name from. This isn’t Lark’s first go-around with noir-style Batman; check out Batman: Nine Lives for a very pulp detective story. 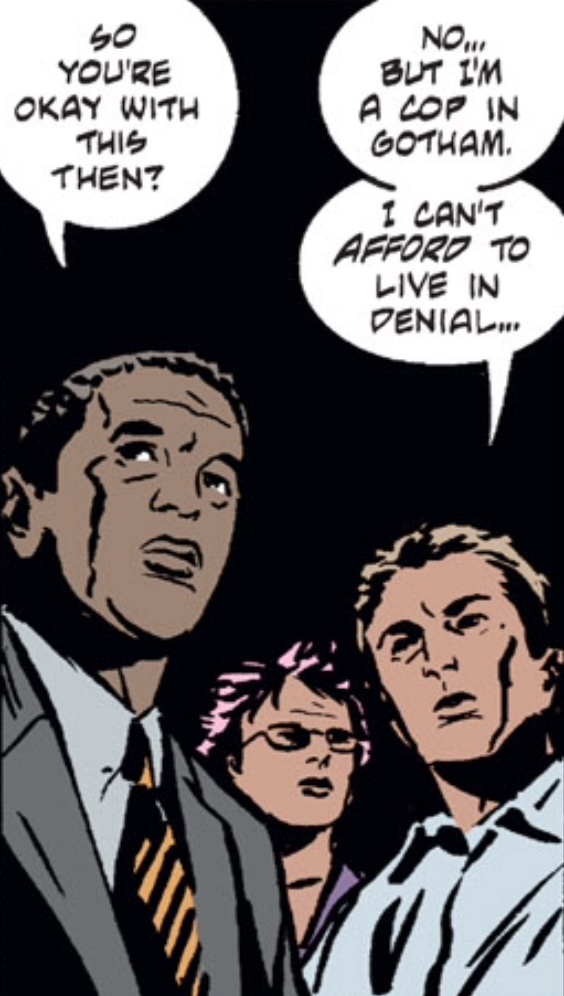 While Gotham Central didn’t impress sales-wise, it was critically lauded as a breath of fresh air in a Bat-heavy time period. Success of sales in trade paperback convinced the publishers at DC enough to give the series the green light for 40 issues – and I’m sure winning an Eisner Award in 2004 for Best Serialized Story didn’t hurt, either. The book is laid out a lot like an episode of Law & Order, but with a Batman twist. The cops find the crime scene, and while it ends up being the deed of one of Gotham’s freaks, there is still a lot of police legwork in order to catch the perp. In addition to the entertaining detective work, Gotham Central gives its readers plenty of insight into not only how life in the police department works, but how the lives of these officers are affected by the life they lead in Gotham. We get a good hard look at what it’s like to live in the shadow of The Bat, and what drives them; it’s a refreshing take on an entire group of people we had only known as a single entity.

That being said, aside from a few good apples (namely Marcus Driver, Renee Montoya and Crispus Allen), the detective work at GCPD. There are so many poor decisions made on the detectives’ part. For years, I thought it was just bad writing to make them inept in order to make Batman look good, but Brubaker’s decision to make them that green makes this series flow so much better. The good part of it is at least the GCPD cares, and trying is half the battle. They are making desperate efforts to try to prove to themselves, and Batman, that they can protect the city without his help. While the detective work is a major aspect of the stories’ development, it’s the focus on social issues like police corruption, and more noticeably, how sexual orientation is treated in a male-dominated workforce.

Over a decade ago, before acceptance became the topic of conversation for mainstream media across the country, Detective Renee Montoya was very much still in the closet. Prior to Montoya, openly gay characters in DC’s staple were not viewed positively (their first openly gay character, Extraño, means “Strange” in Spanish), and even since, portrayal of a gay character in comic books has not been done with as much class and accuracy as here in Gotham Central. Montoya struggles with keeping herself an honest cop, keep her girlfriend and that life closeted, as well as balance the strict Catholic lifestyle that her family abides by. Montoya’s struggle is very real, and her double life – hence the name of the mini-arc, Half a Life – parallels the relationship, however creepy and awkward, that Two-Face has with her. Montoya instantly becomes the best character in the book due to her raw honesty about the situation. 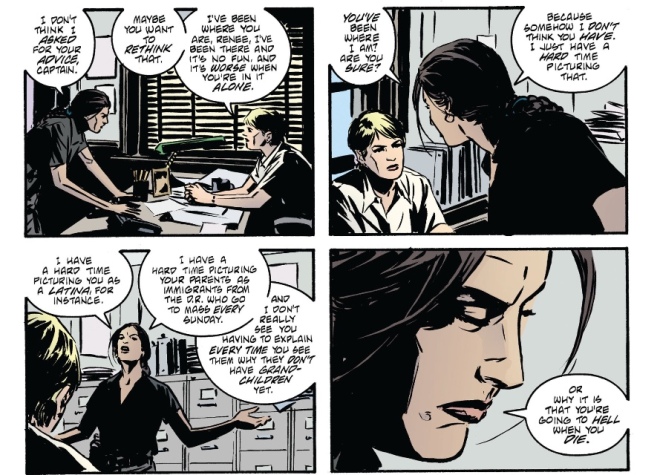 The story got a bit convoluted with several different storylines converging on each other, but for the most part, Gotham Central did a great job at stepping back from the capes and putting the Detective back in Detective Comics… Comics. Volume One may get a little off-track, or corny, but it’s unlike any Batman book you’ve read before. As a reader, you are thrown right in the thick of things, and while that may be overwhelming for somebody not keen on the GCPD history, it is quite enveloping in the way that you get the complete “cop working in Batman’s city” experience.

All media credited to DC Comics