The School being hacked: The idea of the school being hacked is a pretty genius one. It causes a classic comedy trope where group and audience all get a lot of hilarious reveals. Annie was high-strung, so the group tested her for amphetamines. She also happens to be 1% Neanderthal. I do wish there was a little more about our core group in their; however, the revelations about the groups betting pool about Frankie’s sexuality and the fact that Elroy uses naked 3-D models of the three women for his “lady space-travel game” were very funny – the first time I have felt that way about either character this season. 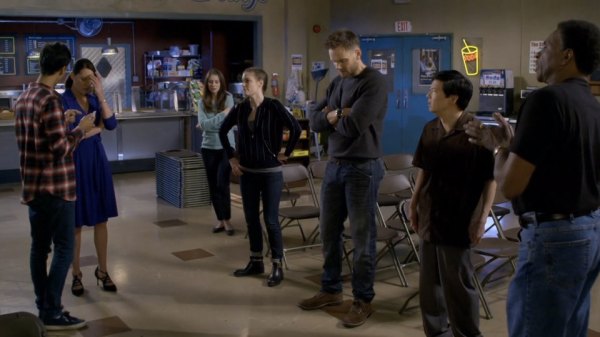 The entire first scene: The Dean being upset about his “computer no worky”, Elroy telling the Dean to run to the mainframe, and finding out that all of the Dean’s passwords are names of his infinite amount of parakeets he had as a child all were worthy of more than a muffled chuckle.

Meta-ness!: This episode had what I consider to be it’s first “meta” moment of the season. Frankie realizes the group is “the group” because they * used * to be a study group, and Chang was their teacher. Chang responds, “That’s right, and I haven’t been well utilized since!” Well said, Community. Well said.

True Community: The final scene of the resource officer and the child in the car doing their True Detective bit was perfect. And the best use of pop culture referencing of the season.

Britta’s lack of logic: I have been a fan of Britta from the beginning. But this season has absolutely ruined her character. In an attempt to bring back the golden days of protesting, Britta initially disapproved of the racist comedian Greendale hired to perform. But as soon as there was mention of her own e-mail being hacked, she was more concerned with free speech than racism. Um? Considering how open to diversity and anti-racist the show has been in the past (by making Pierce the villain), this seemed like a large departure from the essence of what Community is.

Gupta Gupti Gupta: The “jokes” here are so over-the-top it is ridiculous. At least in the past when someone was overly offensive, it had a hint of humor. This was crass for the sake of it, especially at the expense of Neil. At this point, making fun of Neil for his weight is unnecessary. That was what we had “Advanced Dungeons and Dragons” for.

-Abed is apparently still with his girlfriend. It’s too bad we don’t get to see them together.

-The Lunch Lady is hot. At least, she is to Elroy.

-Abed’s line about Joss Whedon and The Avengers made the whole episode. The second best thing was Chang zoning out and saying he thought they were all standing up to go see The Avengers. That is pretty much my life the last week, too.

-This could be the last time we see Neil, since he declares to forgive the group, but never speak to them again.

Hush Comics gives “Basic Email Security” a B- for having more Community – esque elements, but for undermining itself with poorly written jokes and Britta’s total reverse of character.