When I first saw the trailer for American Hustle, I was immediately sold on Amy Adams’ stage presence. I didn’t care what the story was about, I didn’t care how well it was filmed; all i saw was Jennifer Lawrence in a skin-tight outfit and Amy Adams with enough tasteful side-boob to make Zac Efron bashful. What we got instead, though, is a playful, almost Oceans-esque drama about con artists and the love trapezoid that they are caught in. The film is set in the late 1970’s and centered around Abscam, an FBI operation that was initially set up to catch trafficking stolen goods.

The operation ended up leading the FBI to catching many politicians taking dirty money for a variety of reasons, and really opening up America’s eyes to the corruption amongst civil servants (which I’m sure is long and gone today). As far as the movie goes, that’s pretty much the extent in which it follows real life. The names have been changed and the story of our actual main characters are completely fabricated. Which is not a bad thing. By taking a real event and spinning a ludicrous and entertaining situation out of it, there’s less scrutiny to be placed on the accuracy. It’s more about using imagination to create a situation than telling the story of the past.

The acting in American Hustle is top-notch – a comic book nerd ensemble that we can really be proud of. Consisting of Batman (Bale), Lois Lane (Adams), Mystique (Lawrence), Rocket Raccoon (Cooper) and Hawkeye (Renner), I was thrilled the whole way through. As hard as it for me to see Christian Bale as anything but The Dark Knight, his oddly charismatic, comb-over sporting con man, Irving Rosenfeld, is played very well. So well that Bale gained over forty pounds and gave himself two herniated discs trying to achieve a slouched posture. Oh, and talk about a role being tailor-made for an actor, (probably because it was) Jennifer Lawrence is bat-shit crazy as Bale’s wife, Rosalyn Rosenfeld. It’s the perfect blend of over-the-top Real Housewives of New Jersey-style insane that leaves you wondering if it’s just too obscene to be real. I was left hating her character, but in a good way. Really though, it was Amy Adams’ portrayal of Sydney Prosser, or Lady Edith Greensly, that stole the show. Her emotional struggle to find her identity and the way she can seamlessly shift between pseudonyms fooled even me, at times, and I knew it was a scam.

Aside from the main characters, there are also a couple of guest appearances that deserve mention. Robert De Niro plays a big-time crime boss with his hand in the pot trying to fund a casino in Atlantic City and Louis C.K. plays Bradley Cooper’s superior in the FBI. Another nod to Atlantic City, there are a couple guest spots from HBO’s Boardwalk Empire in Shea Whigham and Jack Huston – who, might I add, looks much better with a full face. None of them have significant screen time, but add some credibility to the film and make it feel like the big-time production it really is.

In a time when every big movie out needs a gimmick, American Hustle, ironically, has none. It’s a film with romance, action, humor and plot twists – ya know, like the kind that your mom used to watch. Everything in the movie is set to the late 70’s, from the hair to the wardrobe to the colloquialisms to the lens filters and technology. There were multiple times that I forgot I was watching a 2013 movie. And at just over two hours of run-time, there was never a lull in the story. Not everything came with dramatic death-defying scenes or explosions, but it was still thoroughly compelling. The film does a great job of saying things without saying them, which is an aspect lacking sorely in movies recently. Most importantly, American Hustle isn’t afraid to make fun of itself. There is not a moment too serious that the writers couldn’t insert a joke to show how ridiculous the plot – and era – of the movie are. 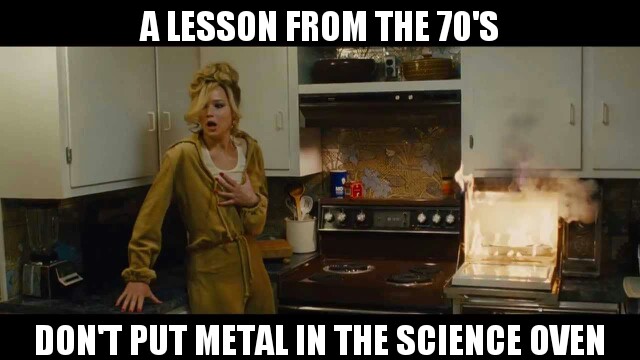 When it comes right down to it, American Hustle is a great story about how the system thought they could corner a con man, and how that con man saw right through it all. With a robust ensemble cast and a plot with enough momentum for the entire film, Hustle relies on story-telling and power-house performances to guide it – not high-tech special effects (Notes: This is the highest rated film we’ve done for 2013, and the five under it are all science-fiction). It will make you laugh and the ending is very satisfying. I highly recommend this movie.

Oh, and this happened 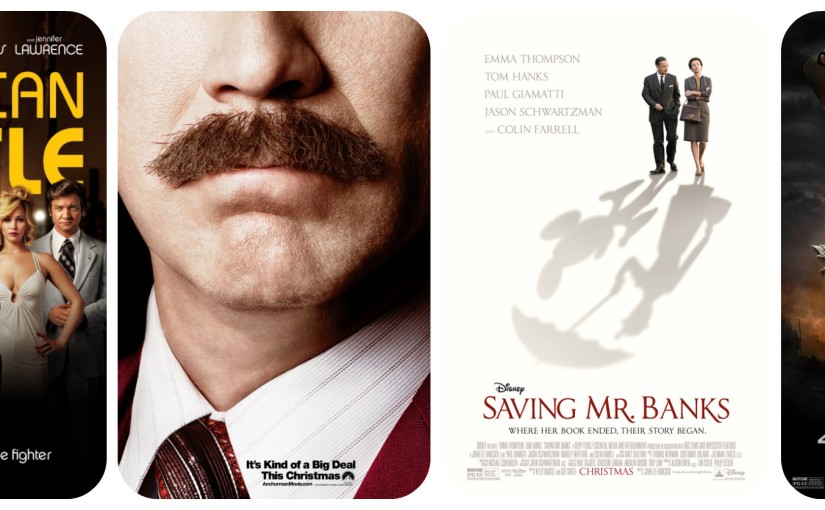 Oh, December.  The month of movies vying for the Oscar, the movies that didn’t fit anywhere else in the year, and the comedy to keep us laughing until the end of the year.  Here is Hush Comic’s movie preview for December:

December 6 – Out of the Furnace

With such a stellar cast, there isn’t really much else to say about this movie.  Ok, ok, I’ll talk about the plot.  Two brothers are very close.  Then, one goes missing.  The police get involved, but don’t do much.  The other brother takes matters into his own hands like Batman does.  Oh my God, the guy who takes matters into his own hands is Batman!  Crazy.  Written and directed by Scott Carpenter of Crazy Heart fame, and starring a sundry of Academy Award nominated actors, Out of the Furnace is bound to be nothing less of impressive.  – A

December 13 – The Hobbit: The Desolation of Smaug

Come, don’t be shy… step into the light…err, I mean… The dark movie theater, to watch the second installment of The Hobbit – Desolation of Smaug. Bilbo (Martin Freeman), Gandalf (Ian McKellen) and the rag tag band of Dwarves continue their adventure to retrieve the Arkenstone from the former Dwarf kingdom and now home of the dangerous and deadly dragon, Smaug. The Hush team is pumped to see Orlando Bloom return as everyone’s favorite archer (sorry Katniss, but you’ve got nothing on Legolas), as well as several other new characters Tolkien-ites will be excited to see on the silver screen. Previews have teased the public with glimpses of the lurking flame giant and come release day hopefully we’ll get a full frontal of the monster. In my personal history, second installments have been my favorite – The Two Towers, The Empire Strikes Back, The Matrix Reloaded (hate on haters) – and Peter Jackson’s most recent go-around is set to please. It’s going to be the best movie on Middle Earth this year – don’t miss it! – T

Hunger Games: Catching Fire was great – don’t get me wrong. But do you know what it was missing? Jennifer Lawrence’s boobs. And Amy Adams’ boobs. And a fat Christian Bale. This crime drama set in the late 1970s focuses on the ABSCAM project, a sting operation to help bring down corrupt politicians. Cooper’s FBI character enlists the con talents of Bale and Adams. However, the plot thickens when the grifters start their own side-hustles. This movie boasts an all-star cast and a pretty interesting story loosely based on real events. Jennifer Lawrence’s cry face in The Hunger Games drove us crazy, but she has some real emotional range and acting prowess. I wouldn’t recommend it over the other movies out this weekend, but I definitely think it’s worth checking out. For totally non-boob reasons, too. – S

I’m not usually a big fan of sequels to comedies, but I think Anchorman 2 will prove me wrong.  Following the hijinks of the news crew from San Diego, this film takes us to New York City where the gang try become number one again, but this time with “GNN”.  They say and do incredibly stupid things and in general make asses of themselves, as is expected.  Steve Carell stole the show in the preview, so he probably will do the same with the movie, and I am most definitely O.K. with that.  Stay Classy, New York? – A

Disney’s newest film, Saving Mr. Banks, is actually about Walt Disney (Tom Hanks), who tries, and obviously succeeds, to convince P.L. Travers (Emma Thompson), the author of Mary Poppins, to give the rights to make a film version of her novel.   Mr. Banks refers to Travers father, and the main inspiration for the father in Mary Poppins.  With two of the best actors to live starring, the heart-warming plot and the light humor, Saving Mr. Banks is sure to be one of the best holiday time movies to come out and will be one I definitely see this year. – A

Keanu Reeves is back this holiday season in the awesome new samurai flick, 47 Ronin. The story follows Reeves as Kai and his 46 fellow samurai sword slingers as they work to avenge the death of their master who was taken down by a military shogun (fun fact – Ronin translates to “leaderless samurai” in Japan). This story has been told and retold for quite some time now – dating back as far as the 18 century as a playwright and a most recent rendition of a 1941 film. I’m excited to see Reeves back on the big screen – his first since The Day the Earth Stood Still remake. While that experience left the average sci-fi buff wanting more, I have much higher expectations for 47 Ronin. Released film footages tout glorious landscapes, vibrant characters, badass creatures of lore and – of course – plenty of sword fights. 47 Ronin promises to deliver flashy, action-packed samurai goodness into my Christmas week and I recommended you get it in yours as well. And don’t forget fans – this story is based on true events. So when you see Rinko Kikuchi transform into a flame spitting dragon, remember that it actually happened. – T

Based off the original story published in The New Yorker in 1939 (the same year Batman first appeared in Detective Comics…. totally unrelated, but I had to…), The Secret Life of Water Mitty is my pick for best dramatic film of the year. It was actually made into a comedy movie in 1947 and starred Danny Kaye, but this is one case where I can fully endorse the remake. Starring and directed by Ben Stiller (who is in desperate need of a comeback), Mitty has been in production for nearly a decade, with names such as Mike Myers, Jim Carrey, Johnny Depp and Sacha Baron Cohen attached to it. Judging from the trailer, Stiller was a great choice. The story follows a Life magazine reporter on a journey to find a missing photo, but is really about the journey to get out and experience life. Taking on a much more inspirational mood than the original, this film is sure to make you quit your job! – S

December 25 – The Wolf of Wall Street

“You can dis me all you want on a blog, or write whatever you want in this magazine and I’ll just be like, ‘Whatever, man. Scorsese thinks I’m awesome,” – Jonah Hill. Telling the story of Jordan Belford, a New York stockbroker who was BALLIN out of control. Literally, he was out of control. There was FBI fraud investigations and the mob got involved. It may seem outlandish, but it’s just the type of character that Leo knocks out of the park. Jay Gatsby, J. Edgar Hoover, Howard Hughes, Calvin Candie – all very powerful men who see everything go up in flames around them (alright, Candie was a joke). The film was pushed back to Christmas Day so that Scorsese could kill some babies to decrease the run time 30 minutes and to try to get it from an NC-17 rating down to an R rating. Should be a great showing, and do a lot to remind you of how broke and crappy you are at life. Because no matter what you got for Christmas, you didn’t get to throw midgets at a Velcro board at the office. – S