Arrow tries to pull the story forward after one of the most shocking mid-season cliff-hangers we’ve ever seen. Obviously, it’d be hard to discuss this episode without spoiling that particular cliff-hanger, so you’ve been warned! Will “Left Behind” answer any of our questions, or continue to pull us along with no answers? 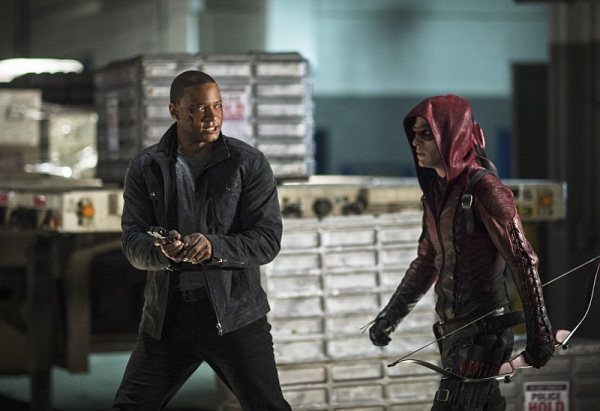 Immediate response to Oliver’s predicament: Unlike this other show we know, Arrow gives us instant gratification for whether or not Oliver Queen is dead. Whereas Flash played out the emergence of Reverse-Flash as the appearance of a boss battle in a video game, Arrow progresses the story naturally. I mean, you didn’t really think the Arrow was dead, did you? While this makes Felicity’s outbursts a bit more annoying, it would have made fans even more frustrated with the show for dragging us along.

A little father-daughter bonding: Thea has come back from her hiatus in Corto Maltese a solid character. And as much as you hate Merlyn for hiding behind Thea, the relationship these two have is pretty darn cool. Imagine how cool Speedy would be if she were actually Speedy. I digress – the sparring session the two have is a lot of fun to watch, especially when Merlyn gives her sage advice that he “wouldn’t recommend texting during a real fight.”

No stupid time-jumping: When a major event like the fight with the Demon’s Head closes out a break between seasons (or mid-seasons, in this case), it’s common for shows to convenient jump ahead in time to relieve themselves of the obligation of explaining what the hell happened. Twice now, once with Canary’s fall and now with Ollie’s, Arrow has taken up the challenge of actual story-telling. It’s nice that there’s still a standard for writing. Just 3-4 days after Oliver left town, and there’s a believable amount of time for angst, but not so much that there’s a giant hole in the timeline.

Flash-back: Mateo gives Oliver a huge IOU on this one when he thinks outside the box to help Mateo track down his wife. There’s still a big gap left to explain how Mateo ended up with the League of Assassins and how Ollie gets out of A.R.G.U.S., but it is closing progressively with each episode. We also get the creation of the trick arrow with this series of flashbacks. I didn’t think I would like this season’s flashbacks because of how much I loved the island, but they are providing so much more detail in story-telling.

Maybe too much Felicity is not a good thing: We here at Hush rave about Felicity every episode (she made our list of Best TV Characters of 2014). She’s so smart and sexy and independent (except when bought off by Ray Palmer, but whatever), and mostly funny. However, there was nothing to laugh at this episode. She was nothing but selfish and weak throughout, and it got very grating, very quickly. If this was Arrow‘s way of giving one of the strongest characters in the show the spotlight, they did it terribly. Arrow has a knack for making us hate, then love female characters, so I’m hoping for a quick rebound for Felicity.

Oliver cheats death. We get it: Talk about beating a dead Queen, jeez. Oliver Queen has lived through so many life-threatening circumstances. He beat the island. He beat Slade. Wait, you mean you know that? That this isn’t your first time watching the show? Then why is it the focal point of every conversation in the Quiver? This episode was so full of whiners that for the first time EVER, I was pining for more Laurel scenes. Where is Wildcat? Let’s get some more badass scenes with Laurel as she plays Canary. Sheesh, you cheat death a couple of times and all of a sudden people expect it of you.

How does Felicity have a job still?: Before I continue to kick Felicity while she is down, just think about what it would be like to be Ray Palmer. You meet this Smoaking hot girl at a tech store, and after seeing her genius potential, you hire her for pennies on the dollar (who cares how much? You’re rich!) as an assistant, and she is a wreck every time you try to talk to her about something work-related. That’s when she is there; because she’s always off with god-knows-who during crucial business times. Even after putting the moves on her, she bashes your dreams and tells you that your dead fiancé would think that they’re stupid. I’m sorry, but no amount of quid pro quo could ever be worth putting up with that.

He’s a Brick… House: It’s not really an Easter Egg, since this one is staring us right in the face throughout the episode, but “Left Behind” was kind of short on them, so we will use what we have. Vinnie Jones (very recognizable character actor) plays Danny “Brick” Brickwell, a metahuman crime-lord with the power of… ya know… bricks? I like the inclusion of metahumans in Arrow, and hope this is the sign of more to come. I also wonder if he sinks as fast as a pile of bricks.

Pride Rock will never be the same: As Merlyn returns to tell Thea the bad news that his dickhead plan failed, he tells her that they must “leave [Star City] and never return.” What the hell? Is this guy Scar from The Lion King in disguise? With Oliver out of the way, who will protect young Thea from the League of Assassins?? Maybe  Diggle and Arsenal will able to give Thea the confidence (s)he needs to turn on Merlyn. Hakuna Matata, bitches.

Project A.T.O.M.: Ray Palmer wants to… “start small” on Project A.T.O.M. It’s no secret that The Atom will be making his debut on Arrow soon enough, but with pillow talk like this, it might come sooner than later.

Laurel takes up a new hobby: While Kate Spencer was never mentioned by name, her spirit lives on in Laurel Lance. Known as Manhunter in the comic book lore, Spencer is a prosecutor who begins moonlighting as a superhero with the help of an arsenal she accrued from the evidence room. Fun Fact: Spencer’s grandfather, Al Pratt, was the original Atom in the comic books. Anyway, I’m sure this is not hinting at anything deeper, but the parallel is definitely there. 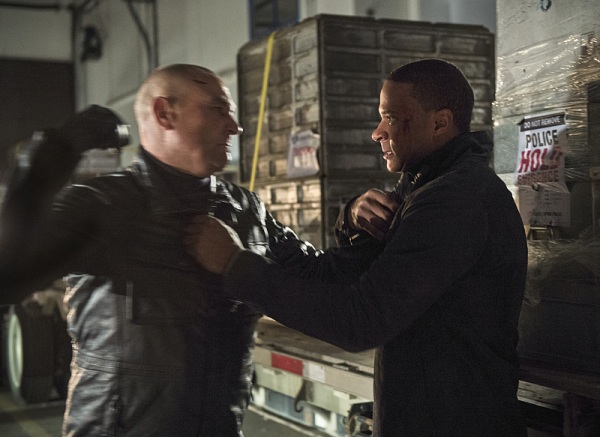 Canary will be instrumental in Brick’s defeat: I’m not sure how high Canary’s sonic frequency weapon gets, but it’s got to be a hell of a lot more effective than Diggle’s headshot was.

Oliver will eventually side with Merlyn… Ugh: Thea is going to be caught in the crosshairs unless Oliver steps in front of her, and faces the League again. Merlyn will keep himself attached to Thea to ensure their safety, and while he is kind of a coward, he does care for Thea. Beating Ra’s in hand-to-hand may not be an option for Oliver, but there’s gotta be some show of force to get the League off Merlyn’s back if he wants to keep Thea, and her midriff, on his side.

Hush Comics gives “Left Behind” a C for Felicity’s horribly written part in the episode, which really swallowed up way too much time when so much else was going on. We get that she loves Oliver, but knowing that he was not dead, and then hearing her blubber about it, and mucking up the mission just made her even less relatable. I actually had to pull a lot of punches on this review, but I’m nowhere near worried about the season rebounding.

All images belong to The CW and DC Entertainment.  They are credited to Ed Araquel and Cate Cameron.