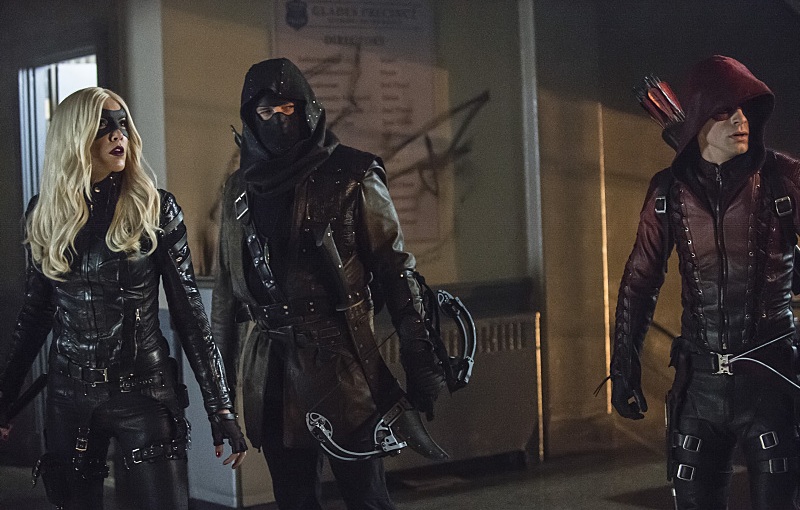 A flare for the dramatic: There really isn’t anything cooler than shooting flares out of a shotgun. While Brick’s reign on the top was short like leprechauns, I have to admit that he is one of the better villains in the series thus far. Cheers to Vinnie Jones, who always brings a fun performance to this type of character. Brick made the city roll over with little effort, and had no problem storming the precinct and murdering city officials to get what he wanted. Even though it was just for a bit, Star City truly was Brick City.

Arsenal taking center stage: With Roy officially taking up the mantle of Arsenal, this season has been noticeably short on his cool fight scenes and humor – that is, until “Uprising.” Not only does Roy get in some funny one-liners, but he also takes point when Team Arrow makes a stand against Brick. He’s got the moves to back up the look, and his separation from Thea, however temporary it’s bound to be, is a breath of fresh air for both of them as they continue to grow.

Seeing a different side to Merlyn: I wouldn’t go so far as to say that Malcolm Merlyn has been a stereotypical bad guy up to this point, but he has most certainly not been a deep one. By letting him take over the flashbacks, we get a whole new look at him. I still don’t really feel that he should be pardoned for his role in the Undertaking, and he’s been quite the coward by hiding behind his oblivious daughter, but with the way the tables turned in “Uprising,” his redemption may not be too far away.

Arrow saves the day without throwing a punch: Diggle, Roy and even Laurel have ben great in Oliver’s absence, but with all due respect, the show is named Arrow for a reason. Oliver is back with a new lease on life. Some people get Swedish massages to unwind, but it seems as though Ollie unwinds by being stabbed and kicked off a cliff. Things are bound to get messy soon, and it’s good that the Arrow has his wits about him for the final stretch of Season 3.

Quentin Lance has selective vision: That’s a good point, Sin… How has Lance not noticed that this Canary going around town is not his daughter – well, at least not that daughter. He didn’t really struggle when he let Roy know he knew who Arsenal’s secret identity is (must be that well-defined butt chin). There is a bit of suspended disbelief when it comes to everybody’s ability to hide the secret of her death to Captain Lance. Plus, that poor guy is gonna be heartbroken. I would almost prefer that he die before he finds out everybody he’s been trusting is lying to him.

Stand-off deja vu: While it worked well for the Season 2 climax, this whole stand-off thing between Brick’s gang and the ragtag band of homeless people (?) is just silly. I mean, you have a group of killers armed with rifles, shotguns and pistols running at the attackers – outfitted with fists. While the yelling battle cry collision thingy is a classic trope (I mean, have you seen this week’s episode of Gotham??), there was potential here to do something better than an “epic” battle in the streets. 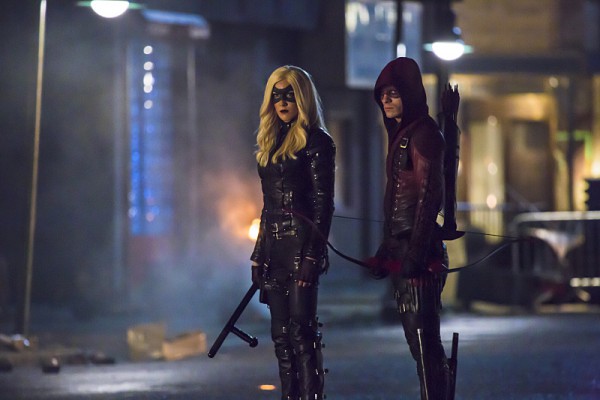 Felicity’s stock continues to plummet: Yeah, so… this is a toughy. We love Felicity, and I even agreed with her decision not to come to Malcolm Merlyn’s aid, but her reaction to Oliver being back was pretty insane. I mean, the guy has literally just come back from the dead, and she was immediately questioning his entire state of being because he wants Merlyn to show him how to kill Ra’s. I’m sorry, Felicity, but weren’t you the one all convinced that Oliver had to murder Ra’s, and that Oliver’s humanity would get him killed? There’s a lot of inconsistency written into Felicity’s character, making her a “reactive” piece to the plot than one who makes things happen on her own, which is disappointing. Oh, and don’t get me started on the “I don’t want to be a woman you love” line. Yeesh.

How did Merlin know about the League of Assassins?: This is more of a nit-pick than a Con, but I have to know how the hell does a white-collar asshole like Malcolm Merlyn just stumble upon the League of Assassins? “I heard of a place that…” – no you didn’t, Malcolm. You can’t just find that shit on Travelocity. Nobody at the Elks Lodge let it slip that they had an amazing time in Nanda Parbat. And who would have known that the way to stop a child assassin from murdering you would be a quarter behind the ear?

– Cross-show references ran amuck in “Uprising.” First, there was the reference to Arsenal being the “red streak” guy. Get with the times, goons, Iris named him The Flash weeks ago. Also, the line about how Tommy didn’t want him to be an angel anymore (aww, how sad) is a call-back to Caitlin Snow’s reference to how she didn’t want Robbie to be a hero.

– Wildcat makes his superhero debut, with disastrous results. Although, dude put quite the hurt on Brick’s face.

– Ollie’s excuse for his hiatus? He was in Blüdhaven, getting arrested. Nobody believes you, Oliver. Blüdhaven is the notoriously bad part of town in Gotham. I was under the impression Star City in this show was nowhere near Gotham, making this a pretty wild story. Thea must just be used to getting lied to.

There’s no way Maseo stays out of this one: She frequently talked about being unable to rejoin society. Maseo, who becomes Katana in the comic books, still is attached to Oliver and wants to rejoin the fight, but not the world. It’s a stretch, but it could be a nod to The Outsiders, which frequently includes Katana as a member. Looks for Maseo to come back into play once…

Ra’s al Ghul murders Tatsu: I really wish it didn’t have to happen, but Tatsu has dug himself a hole too deep with the Demon’s Head. This will be good in a way since he seems to have plateaued as a character, while Maseo has a lot more growing to do. Nothing like a good old-fashioned family murder to jump-start some character development.

Hush Comics gives “Uprising” a B; it was a great way to wrap up an arc surrounding an obscure villain, give some love to Arsenal and the new Canary, while still offer something new going forward. Oliver’s return could not be valuable enough to the show.

All images belong to The CW and DC Entertainment.  They are credited to Cate Cameron.