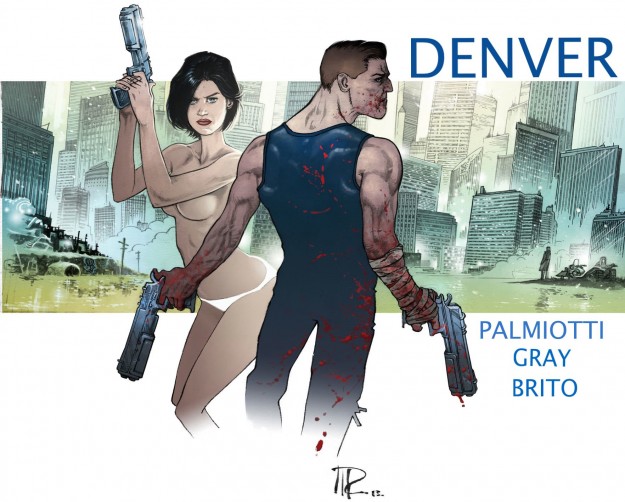 With the expansion of Hush Comics, we have decided to give bi-weekly news updates.  Anything we find news-worthy will be posted here bi-weekly.  Have anything to add?  Post it in the comments!

R.I.P., Shirley Temple. May the afterlife be full of maraschino cherries and lemon-lime soda.

Jimmy Palmiotti, DC Comics writer, is trying to launch an independent graphic novel through Kickstarter called, get this, Denver. Set in a future where Denver remains the last city in a world submerged by water (now tell me Global warming isn’t real!), Denver is about a whole new type of apocalypse. Check out this interview detailing the process.

If you weren’t sold on a Tarzan reboot that star’s Alexander Skarsgard, Samuel L Jackson and Christoph Waltz, the inclusion of The Wolf of Wall Street‘s Margot Robbie as Jane will have your jaw on the ground and your wallet in the air.

Speaking of Sam Jackson, this BAMF went all Black History Month on Sam Rubin during a TV interview for mistaking a commercial Laurence Fishburne did as Jackson’s. While I think that Rubin was just a victim of circumstance – the circumstance being that he told the angriest black man in Hollywood that he looks like another famous black man, it sheds some light on the portrayal of black celebrities among the media. Do you remember when George Stephanopoulos mistook Celtics’ legend Bill Russell for Morgan Freeman?

The hilarious Englishman John Oliver or Daily Show and Community fame will be getting his own HBO show called Last Week Tonight with John Oliver. It sounds like it will be the same format as Jon Stewart’s show, but with more foul language and obscenities – just the way we like it.

The Protector 2, starring Muy Thai legend and actor Tony Jaa, will be released March 27th (date varies). If you don’t know who Tony Jaa is, take ten minutes out of your day to watch this. This guy is 38 years old and still kicking ass. Oh yeah, Wu-Tang legend The RZA will also be acting in the film!

All-New Ghost Rider is coming out in May, and it’s not the Johnny Blaze we know. Check out this feature on the amazing new approach to a classic Marvel character.

For people looking for a reason to cut out cable/dish, Apple TV may be releasing a version that can stream live TV. I’m pretty skeptical, but it sounds like we’re on the right track.

Stephen King’s It was one of the scariest films I’ve ever seen. Alright, I have have been seven when I saw it – give me a break. A reboot has been in the works for almost two years, but director Cary Fukunaga (True Detective) has confirmed that it’s happening.

Now that Nikita is over, lead actress Maggie Q has found a new gig as a Chinese pirate queen Ching Shih in the limited series Red Flag. Shih was a real pirate in the 1800’s who rose through the ranks as a prostitute (they don’t call ’em working girls for nothing). This is in addition to her role of Tori Wu in the upcoming film-adaptation of Divergent.

Guess what Batman: Arkham Origins fans? WB Games has heard your complaints, and they don’t care about your problems. They’re too busy making the next Mr. Freeze DLC. It’s an added frustration to a game that has been riddled (get it?) with issues since it launched in October.

Mob City no mo.’  The TNT mini-series centered around mob life in LA during the 30’s and 40’s has been cancelled. It bums me out because John Bernthal (Shane from The Walking Dead) and friends acted their butts off in this noir Frank Darabont production, and I felt the show could have gone a lot further if renewed.

DC Comics and Robot Chicken are teaming up, once again, to release DC Comics Special: Villains in Paradise. There will also be accompanying variants for special DC Comics issues in March. Check em out here.

In the upcoming Flash series (just a pilot at this point), Tom Cavanagh will play Harrison Wells, genius physicist of S.T.A.R. Labs. It’s a huge jump from his portrayal as the title character of Ed, or as JD’s brother in Scrubs, but I think it’s a good call. Also, the original Flash from the 1970’s series will be making an appearance on the show. Our bet is that he will play the first Flash, Jay Garrick.

They just can’t let How I Met Your Mother go. A lead character has been cast for the spin-off, titled How I Met Your Dad. With HIMYM ending on March 31, I think it’s too soon to be moving on to a spin-off.

Joss Whedon and Co. have begun filming Avengers: Age of Ultron, slated to hit theaters in May 2015.

New York’s Fashion Week displayed some of the freshest dresses this side of the galaxy. Check out the Star Wars-themed dresses here.

Would you sleep with Scarlett Johansson, even if it meant being trapped in goo and preyed on by an alien? What, did I lose you after “Johansson?” Well then, you might want to check out Under the Skin, coming to theaters everywhere April 11. Leave you girlfriends at home.

Joseph Gordon-Levitt and Seth Rogen, along with their 50/50 director Jonathan Levine, will reunite to bring holiday cheer back to the world in Xmas.

Yee-haw! Star Wars fans, saddle up and get ready for Kanan, the cowboy Jedi (although, aren’t they all space cowboys?). Voiced by Freddie Prinze Jr., Kanan will debut in the upcoming Disney animated series, Star Wars: Rebels.