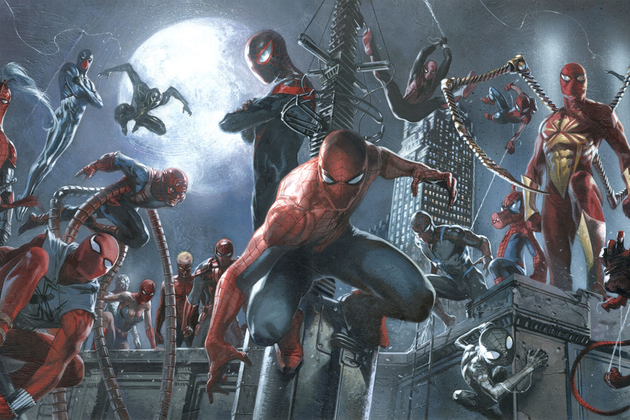 With Adrian and Sherif in the wonderland that is Emerald City Comic-Con, I will be taking over the weekly news updates, and since we weren’t able to publish on Wednesday, this edition is PACKED with nerdcore details.

Think there is such a thing as too much Spiderman?  Marvel, Spidey writer Dan Slott and Hush all disagree!  Get ready for the Spider-verse!!

Speaking of ol’ web-head, I knew it wouldn’t take long before Disney got on their corporate high horse and decided to be a dick to Stan Lee, telling him that he doesn’t own Spider-Man. It’s the equivalent of telling your grandpa that his service in Vietnam didn’t mean shit for your freedom. Shame on you Disney. Respect your elders; I mean, the guy is twenty years younger than Walt Disney himself and has arguably brought just as much joy to the world.

This might be old news to some of you, but this is Batman’s 75th Anniversary (Detective Comics #27 debuted in May 1939). DC has announced their plans for the year to celebrate the Dark Knight.

On a somber note, original Batman TV series creator, Lorenzo Sempler Jr. passed away earlier this week.  Our cowls go off to Sempler who was truly a trailblazing force for one of the most iconic and popular heroes of all time.

EA says that upcoming Star Wars games will try to follow the Batman: Arkham model. Good news is that Arkham games are awesome. Bad news is that the last time EA tried to model something after another publisher, we got NBA Live 14. Why not emulate Mass Effect? We hear that was pretty good.

Looks like we’ll all be able to start liking our friend’s status in a whole new virtual world we wear on our face!!  Facebook purchased Oculus in a move that’s sure to make techies all over the world giddy.  What’s an Oculus you ask?  Think of ski-goggles that put you right in the middle of your favorite video game/virtual world.  Finally – something to take my Farmville experience to another level.

Been practicing your bending skills?  Compare how much progress you’ve made when Book 2 of the Legend of Korra hits DVD and Blu-Ray shelves – officially announced to be released on July 1st.

We all knew whoever was lucky enough to date S.H.I.E.L.D.’s Agent Coulson would have to be  able to hang with the likes of the Avengers.  Amy Acker (Angel, Dollhouse) is no stranger to action and adventure, so we think she’ll fit right in.  It’s also got us wondering – does Acker really know how to play the Cello?

AMC’s Comic Book Men got renewed for another season. They must really be hurting for new shows. I’m still wondering how they will cope with the end of Breaking Bad and Mad Men. Two options: ride The Walking Dead til the wheels fall off or put out a new version of Low Winter Sun every year.

Arnold is back at it again.  Schwarzenegger will play an aged cyborg in Terminator: Genesis, the next installment in the popular sci-fi series.  He did say he’d be back…

This next one left me shell shocked.  I’ve already donned my masked and strapped on my sais.  The first TMNT teaser is out.  Watch it as many times as you can while you wait for that pizza you just ordered.

Also teasing us this week is the first trailer for Hercules: The Thracian Wars.  This one is bound to be better than the other Hercules that dropped earlier this year.  I mean, it stars Dwayne “The Rock” Johnson pretty much as himself.  Can you smell what the demigod is cooking?

This kid is out of control and Hush is eating it up.

And it case you hadn’t heard – The Walking Dead Season 4 Finale premiers in a few hours!  Catch up on where our wayward survivors by reading our reviews!