In the CW show Supernatural, brothers Sam and Dean Winchester drive cross country all over the US hunting demons (including vampires, werewolves, and other monsters). Demons in the Supernatural universe prey on the innocent. They love to inflict fear, self-loathing, and play with people’s minds for fun through manipulation and gaining one’s trust. As Dean so simply puts it in the first episode, the Winchesters’ job is “Saving people, hunting things; the Family Business.” Throughout the show, Sam and Dean take down each and every demon they come across and have been doing so for ten seasons.

If you’re a fan of Supernatural, or have a Tumblr account for that matter, you know how important family is to the central characters. You also know that the term “family” doesn’t always mean blood relatives. Sam and Dean would go to the ends of the Earth for each other. They have literally gone to hell and back several times with detours in heaven and purgatory to keep each other safe.

Both Sam and Dean fall off the wagon countless times throughout the show, often multiple times every season, but each time it’s their dedication to each other that brings them back from the edge. In Season Two, Dean sells his soul to bring Sam back to life, understanding that he now only has a year left on Earth. More recently, *SPOILER* Dean becomes a demon and Sam relentlessly chases his brother down, then successfully purges the demon blood out of him, changing him back into a human.

But that kinda of loyalty, determination and compassion doesn’t end between the two brothers. Characters who are not related to the brothers also go to long lengths for their wellbeing as well, such as Bobby, Castiel, Ellen, Jo, Kevin, Garth, Charlie, Jody, Benny and Ash just to name a few. Wherever one or both brothers go, their chosen family is right behind them, catching them each and every time they fall.

Castiel literally pulled Dean out of hell after the human’s death. He rebels against Heaven, gives up his life as an angel, and dies numerously for the Winchesters. No matter what Castiel’s godly mission is, the angel never waivers in his loyalty and compassion for the brothers.

Ellen and Jo willingly sacrifice themselves for the brothers and the greater good. Kevin is dedicated to deciphering the tablets and comes to the boys rescue whenever they call. Garth takes over Bobby’s role of a walking “ganking encyclopedia” after Bobby’s death. Charlie is their go-to hacker throughout the show and comes to help at the drop of a hat. Jody, a sheriff, helps the boys evade the police and yanks their ass out of trouble countless times. Benny helps Dean find Castiel in Purgatory, then sacrifices himself to get Sam out. Ash helps the brothers multiple times with his computer skills and hides them from Zachariah in Heaven.

The dysfunctional, makeshift family in this series will do anything for each other. They’re not blood, but they consistently take care of their own. It’s no wonder the fans of Supernatural have a similar feeling towards each other.

Starting on December 26th and 27th, hundreds of Supernatural centered Tumblr accounts were sent malicious, anonymous messages urging the owners of those accounts to kill themselves. The fans targeted had talked openly about their struggles with depression and self harm and the attackers were deliberately preying on that vulnerability. Their sole intent was to convince people— those they knew were struggling with self-worth— to commit suicide and did so through manipulation, even pretending to be people the victims knew in real life.

Unfortunately, the attackers were successful with numerous Tumblr users being hospitalized. While there is a lot of speculative information out there due to hacking and it’s difficult to track down the entire story, the fact remains that the Supernatural fandom is under attack by demon-like individuals and if there’s anything Supernatural fans are good at, it’s getting rid of demons.

Once word got out about the anonymous hate, Supernatural fans all over the world began combating it. Instead of salt and holy water, however, the fandom has turned to love and kindness to fight against the harm these particular demons have inflicted. Fans rushed to the rescue, sending out countless messages of love and support to outweigh the hateful messages and urged victims to turn off anonymous messages in their blog settings. The hashtags “FamilyDon’tEndWithBlood”, “AffectedByHate” and “HuntersDon’tSupportBullying” began trending on Tumblr and Twitter. Masterposts began popping up, listing Tumblr users in need of support, what condition those users were in, and urges to call for help if anyone knows the users personally.  There were also numerous “safehouse” blogs that quickly appeared, giving those affected a virtual place to run to if attacked.

Soon, fans were writing “Family Don’t End With Blood” on their skin with permanent marker and sharing them online in support.

When word got to the cast and crew of Supernatural, tweets and blog posts of support hit the web. Mark Shepard (Crowley, ironically the King of Hell and number one demon of Supernatural) sent out numerous tweets, expressing his love for the fandom and urging those affected not to listen to their attackers, as difficult as that may be. Misha Collins (Castiel) reminded fans that we can’t necessarily stop hate, but we can choose to ignore it. Felicia Day (Charlie) urged fans to stay strong and reach out for help. Visual Effects Coordinator, Ryan Curtis posted crisis hotline numbers as resources for fans to use. Osric Chau felt that 140 characters wasn’t enough to express his feelings about the event and wrote a post on TwitLonger about the incidents. While Jared Padalecki and Jensen Ackles have yet to make a statement, both have spoken many times about how supportive the fandom is and how much they care for their fans. 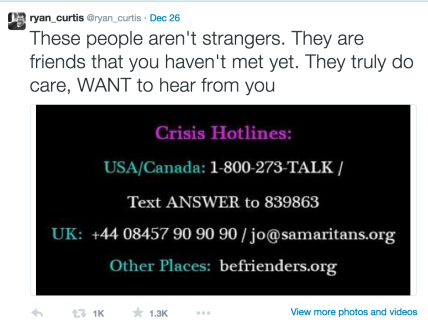 A change.org petition is in the works to find and press charges against the IP address of the perpetrators. “Within the coding of Tumblr, the IP adresses for messages are stored, even for anonymous messengers. Go into the code. Find the people responsible for this and work with the police and internet service providers to identify these people so that they can go to jail for these crimes. These people should never be allowed to access Tumblr or any site where they can perform this kind of hatred again,” says the petition’s description. It currently has over 8,200 supporters with less than 2,000 needed (as of December 28th.)

No one knows why the Supernatural fandom in particular was targeted. It is very hard to understand why anyone would be so malicious towards perfect strangers. However, like Sam and Dean, fans have taken up arms against this hate. In the same way a circle of salt might keep out a demon on the show, fans have fought and are still fighting to keep these very real demons from doing any more harm than they already have. Our hearts are with the family and friends of those affected. 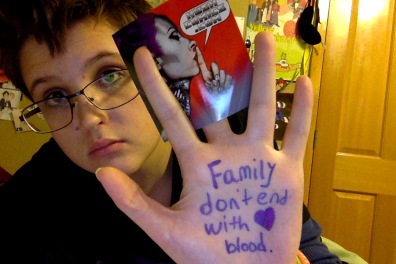 If you are dealing with suicidal thoughts, please know there are resources out there for you. If you live in America please call the National Suicide Prevention Lifeline at 1 (800) 273-8255. If you live in the US or Canada you can call 1-800-273-TALK. You can also text ANSWER to 839863. You can also look down below at the list of hotlines Tumblr user awlahey has drawn up or check this list for a crisis hotline in your area. 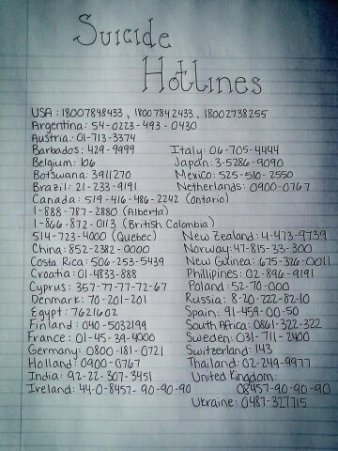 Photos courtesy of Twitter and Tumblr and the CW.