Have you ever wanted to kill your family? Well now you can take out the pent up rage out on sad little people on see-through cards. Gloom is a wonderfully sadistic game where the winner has a team full of losers. In Gloom, each player controls the fate of one family of five lovable losers. There are only four families so the game is designed for four players, but it can be played with five by each player giving up one family member to the fifth player.

The game play is really simple. Each player has one family they are trying to cause misery too while making their opponent’s family members happy. Once you have your family members depressed enough to your liking, you want to try to kill them off one by one. Players can also play actions to make things harder or easier. The first player to kill off all of their family members ends the game and then the sadness (points) are tallied up. Then a winner is declared.

The families are already very gloomy to start things out. The little gothic portraits are fantastic and fit the theme of the game perfectly. The families are comprised of delightful characters; the circus family has a creepy clown that’s wonderful. There’s a brain in a box and a Frankenstein teddy bear, weird twins, and what is surely an evil butler, the family dog and the red-headed stepchild. There’s a family to murder for everyone. 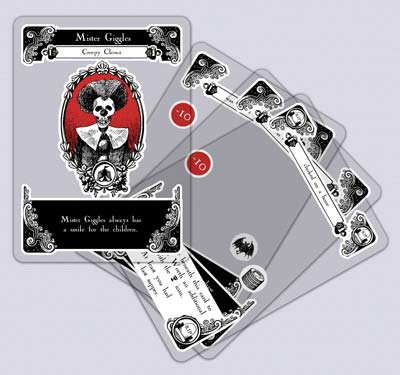 Game play is simple enough. Essentially, each player takes turns inflicting unpleasantness to the individuals of their own respective families. These misfortunes give each family member a negative number that represents their mood. For example Grogar, the Frankenstein teddy bear, may have “contracted consumption” giving him a mood of -30. Once your family member has enough gloom to your liking, you can happily kill them. No reason a very sad Grogar can’t be “burnt by a mob”, as the card says, “Fifty people with torches and pitchforks can’t be wrong.” Players also can have good things happen to their opponent’s families. Poor old Balthazar, the unfaithful hound has had a rough life so maybe he deserves to be “the toast of the town”, giving him a +15 to his mood. As you’ve probably picked up by now, you want negative numbers on your family; the worse off they are, the better!

When playing the mood altering cards, modifiers, you do have to pay attention to the actions that come along with them. Cards have effects that can be quick and painless or be continuous. You may have to pass along cards to other players or limit yourself to how many cards you can draw. Many of he modifier cards also have little story icons to go along with them. These icons represent story elements to use in the description of the bad things that happen to the characters. They also come into play in different way with the other cards. The story icons can also be covered up and replaced by playing different modifier cards on top of them. There are event cards that are just quick play for quick strikes against your opponents. The untimely death cards are what finish off your family and they all have their own rules and provide bonuses. If you want to play the “died old and alone” card you can’t play it on anyone with the heart symbol currently visible.

The first player to wipe out their clan ends the game and then the players tally up the negative points on their dead family members. Sorry — the alive ones don’t count. The player with the most negative points wins. It’s a simple game of murdering your family that happens to be a lot of fun. I think the best part of this game is the stories players come up with for the terrible things that happen. You can just play the cards and go about your business but where’s the fun in that? Get creative! PLAY GLOOM!