Denver-based comic book creator Ryan Wise is bringing the zombie apocalypse right to our own back doors with 8:15. The zombie outbreak is global, happening simultaneously around the world. 8:15 focuses on the outbreak in Denver which is not a usual setting for most comics. As Ryan or any good writer will tell you, you have to write what you know. With a good cast of characters leading 8:15, Ryan is looking to make a big splash in a genre that sometimes seems overrun. I had a chance to ask him some questions about 8:15 recently.

Hush Comics: So the zombie apocalypse comes to Denver? Why did you choose to focus your story in Denver?
Ryan Wise: One of the key points in 8:15 is the fact that the zombie event occurs around the entire globe at the same time: 8:15pm GMT. This is the the “outbreak getting out of control” scenario we have all become used to. Since the z-day event is global, we had the freedom to choose to set our story pretty much anywhere in the world. It became a matter of writing what you know and loving where you are. We try to source as much of our production process locally and that include the story and setting.

HC: We’ve seen an up-tick in horror comics recently. Why did you want to go with zombies?
RW: I, too, have noticed the increase in horror comic releases, but I do not think it is a bad thing. In fact, I feel like it reflects an increase in the amount of interest and demand for products like that, and that makes me very optimistic for 8:15. I knew that when we decided to write a zombie story we were entering a crowded genre. We felt like we would be able to cut through the noise and create something that zombie fans can really enjoy. With the release of Part 2, we can finally give people a glimpse of how thought-out and deep our zombie scenario is. Zombies provide a perfect medium for complex story telling like that. 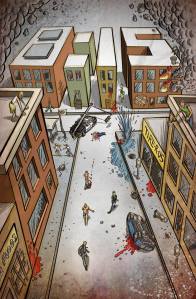 HC: You have a pretty good size cast of characters. Was it always the plan to have a larger group? Why not do a smaller cast?
RW: When 8:15 was first conceptualized, it had a pretty small cast consisting of only the characters necessary to drive the main plot forward. As the idea was developed, more and more characters had to be added in order to allow us to highlight themes. Those newly conceived characters, developed well into the writing process, have ranged from mere zombie fodder to one character, Jordan, that has become a major force in the 8:15 universe. 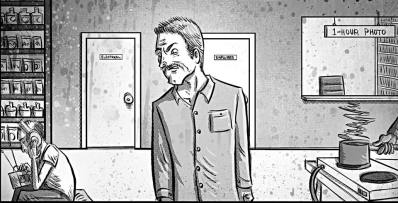 HC: How difficult was it to get 8:15 up and running? What was it like going from concept to product?
RW: The most difficult part of getting 8:15 up and running was not the logistics or product development; those things can be easily overcome with persistence and effort. The hardest part was learning how to change the way I think and plan. Producing 8:15 was a process that requires many people and months to complete. By the time Part 1 was released on April 17th, 2015, I had learned that planning months and years into the future is something I needed to do to ensure the future and what 8:15 Comics wants to do, tell stories.

HC: It looks like a took a couple of tries to be successfully kickstarted; did you ever get discouraged?
RW: I did have a hard time initially getting funded on Kickstater.com, but I never got discouraged. I knew that in order to be successful anywhere, including Kickstarter.com, you need to have supporters and you need to have a strategy. It took me a few tries to develop both. Plus the experience I gained from those failed attempts was critical to my future success. It taught me to market and reach out to my audience in more effective ways.

HC: How far to plan on taking 8:15? Do you have a stopping point planned out?
RW: I am asked all the time, “Do you have the whole story written out?,” and I absolutely love this question!! Growing up in the 90’s, I was inundated with incomplete stories and season by season writing. Even contemporary programming falls into this trap. 8:15 is written out and an ending is planned! This was always a key principal while developing the story.

HC: What’s your ultimate goal with 8:15?
RW: The ultimate goal of 8:15 is to contribute to the overall success of 8:15 Comics and to help the company develop a fan base to help in the future success of our many forthcoming series and projects. 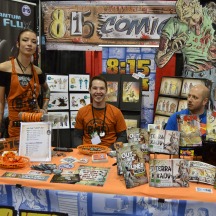 With zombie and horror books really becoming a mass market thanks to the success of The Walking Dead it’s sometimes hard for anything new to make any headway. 8:15 is a different feel than most zombie stories. With its strong cast of characters and very unique art style 8:15 should be a power voice on a crowded stage. You can check out their website, 815comics.com, or their Facebook page for all new updates including new Kickstarter campaigns as new issues are ready to come out.