Jurassic World takes us on a journey to John Hammond’s original dream, before the follies of man could destroy such inspiration. Had it not been for Dennis Nedry being an insanely irresponsible and selfish asshole, Hammond’s dream may have even been possible in his time. Now, with the help of a wealthy and adventurous investor, the park is open and in full swing. They use top-of-the-line engineering and technology to ensure safety, and their bioengineers are the best in the world, led by Dr. Henry Wu – one of Hammond’s original scientists. Simon Masrani, a close friend of Hammond’s, invested in the idea and brought it to life for him, before he passed away. Masrani is charismatic, passionate and believes wholeheartedly in Hammond’s ideals. This particular story takes place when two brothers, the nephews of the park’s C.E.O., come to visit and just as they are preparing to unleash the newest attraction – the Indominus Rex. But does that idea work as a sequel or has too much time gone by in the Jurassic Park universe for the thought to even be plausible? Can this story from so many years ago still stand, or is it just another ploy to make a bazillion dollars by riding the coattails of something already successful? Remember when the original Jurassic Park was an adventure 65 million years in the making? Well I feel like Jurassic World is a movie 22 (not million) years in the making. This was both the sequel we deserved, and the sequel we needed. 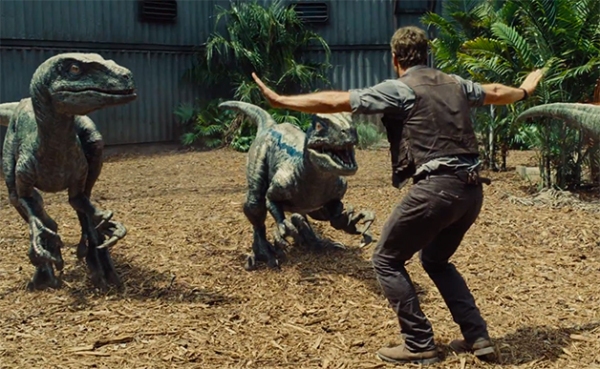 Now that I have that out of the way, I can actually focus on what made Jurassic World so much more than I had hoped for. I am a huge fangirl of the franchise, and I won’t go into detail about how moved I was when the music started in and the movie started, after all these years of waiting for it [Note: That’s a lie. You can read about Keriann gushing about the original trilogy here]. I was captivated from the very moment it started. The whole experience was almost overwhelming for me. When the two brothers, Gray and Zach, arrive at the park and go through those iconic gates, I was left breathless, and with a lump in my throat. Jurassic World was so well-written, it had everything, and in true Jurassic Park fashion, it was absolutely stunning.

Jurassic World had an excellent pace, from action to story to drama, and then back to more action. Nothing ever felt like it carried on too long or like story was being wasted for the sake of action. None of the characters went through very powerful individual arcs – except for Claire, who went from calling the dinosaurs assets to seeing that they were beautiful and wild animals. Even without those individual changes to actions and motivations, everyone in the movie was so likable, except for the one person you were supposed to hate, Hoskins – played by Vincent D’Onofrio – and even he was charming while be excellent at villain-ing. Chris Pratt makes an absolutely amazing action hero and tough guy. He is fantastic with drama and substance, but is also so naturally witty that he can bring enormous life to even the cheesiest of lines. Bryce Dallas Howard is captivating and endearing, even at the points when you root against Claire, she brings out the redeeming qualities that will eventually save the character. Gray and Zach stole my heart and instead of feeling like a burden on the plot they, were a solid addition. Jake Johnson was hilarious as the new version of a non-evil Dennis Nedry/Ray Arnold hybrid and he fit all the plot points appropriately, adding comic relief when needed and sharing in the intensity when a joke would have been annoying.

As I said before, this movie had everything. There were times when I felt a fear that was just like what I felt as a kid. When the Indominus Rex peaks her jaws around the corner for the first time, and she nearly mimics the T-Rex’s action during her on-screen reveal in Jurassic Park; I was on the edge of my seat. Indominus Rex was a genuinely terrifying antagonist, being both brutal and determined, but she wasn’t the only scary part. I’m sure you’ve seen in the trailers and TV spots when the Pteranodons and Dimorphodons are unleashed upon thousands of tourists in the park. That part was horrifying! It was so much scarier than I thought it would be, watching those winged beasts attack and pick defenseless people off. Maybe I’m lame now because I have kids, but that part was so scary on a primal level because there was nothing any of those people could do to protect themselves or their loved ones. 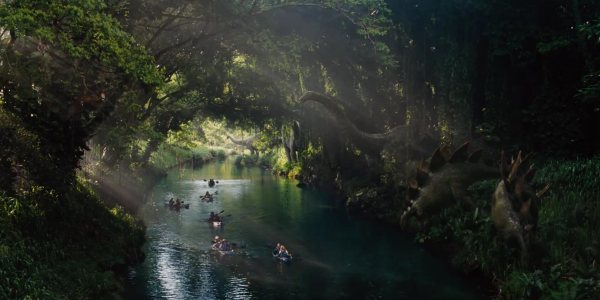 There was also real drama in Jurassic World, which is unique to this movie in the series. Zach stepping up to protect Gray was sweet, and the relationship that eventually came to light between the two of them was heartwarming. I feel like in this movie more than any others, there was new life breathed into the dinosaurs. They were portrayed so much more like living animals with personalities, motivations, and emotions. That was clearly evident in the Velociraptor pack and in the Apatasaurus when she was dying. It was devastating to watch that poor thing take its last breaths, and when Blue ran off into the night after losing the rest of her pack I was so heartbroken for her. This movie pulled out a whole array of emotions in me.

One of the elements of Jurassic World that made the writing so strong was the attention to detail. The little things went so far. First of all, they paid great attention to acknowledging any scientific inaccuracies people may have observed in the previous movies. I myself always wondered how the got the DNA of so many species, and they made a point to have a decoration in the park that showcased multiple chunks of amber, all presumably with different blood sucking insects embedded in them. The conversation between Dr. Wu and Misrani addressed the added DNA of reptilian species and explaining that is why these dinos look more like lizards, and not birds as modern paleontological science suggests. Oh, and I feel quite the fool if I didn’t touch on the crazy awesome dinosaur action! It didn’t overtake the plot of the movie by any means, but when it happened, it was SO. FREAKING. COOL –  especially the battle royale between Indominus, T-Rex, and the Velociraptors. That shit was like watching an old monster movie with way better effects and way cooler monsters. 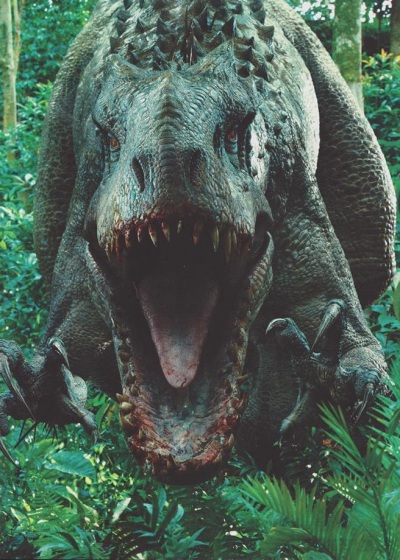 After all the gushing, it is only fair to acknowledge the things that didn’t work for me. First of all, militarized dinosaurs. I cannot believe what a huge plot point that turned out to be. Militarized dinos is the stupidest thing I’ve ever heard. Who the hell is dumb enough to think that would be a good idea? Oh, drones can’t go into caves and can be hacked? Yeah, I get that, but dinosaurs are dinosaurs and they do this thing where they’re wild animals driven only by their need to survive and kill any/everyone they feel like. Not to mention, they attached lazer beams to Velociraptors heads, not at all unlike Dr. Evil’s sharks with “fricken’ laser beams.” I’ll give them this: for a dumb idea, it was very well-written. Vincent D’Onfrio played an excellent bad guy, and while the idea was ridiculous, the character’s belief in the idea made it work.

Second, and this isn’t a big problem for the movie, is Owen Grady on his motorcycle with the pack of Velociraptors. Maybe it’s just me, but everything else about this movie could be so very right (and basically it was) and no matter what, that was always going to be too goofy. I know Owen is the Alpha, and that is exactly how he would travel but nothing will make it not look silly. It was supposed to be badass, but it made me giggle.

I know it sounds nuts, but as such a fan girl of the Jurassic Park movies, it was so very moving for me to gaze upon the theme park that is Jurassic World. It was breathtaking and such a dream come true. There was something so very beautiful and sentimental about. Every inch of it, especially the statue of John Hammond, was such a loving tribute. When Gray and Zach stumbled upon the original Visitor’s Center and found the “When Dinosaurs Ruled the Earth” banner crumpled up on the ground and when Gray walked up to the Velociraptor mural and ran his hand across it, I was humbled and crippled by emotion. It was so awesome for that to be included in this film, and it was so heartfelt. The whole movie felt like a loving tribute to something so incredible. There are few movies in history that have changed the world, Jurassic Park is one of them. I don’t think continuing this vision could possibly have been put in better hands. Colin Trevorrow so lovingly took this sequel to amazing places, all the while reminding the audience where it all began and how that made us feel. I was blown away, I was speechless, and on more than one occasion, I was overwhelmed with emotion, nostalgia, wonder, and adoration.

One thought on “Jurassic World Review”