I never thought I’d see the day that I would prefer seeing Jaime and Cersei Lannister make sex in front of their dead son… but it has come nevertheless.

Ramsay delivers: Although it was kind of a bummer we didn’t get to see it planned, Ramsay’s sack of Stannis’ camp was swift and brutal, just as you’d expect from Ramsay. The kid has balls. Now that everybody hates Stannis, I don’t care who wins the brutal fighting between he and the Boltons, as long as we get to see more cool stuff like this.

Alliser’s subordination: With Aemon gone, Alliser Thorne could easily lead a mutiny against Commander Jon Snow. Snow’s heart, specifically his admiration and respect for the Wildling leaders, could end up screwing them all in the end. You can almost see the hatred in his eyes as he tells his underlings to open the gates. But he did it. He didn’t leave them all to die down there. It takes a real sense of duty not to take advantage of that opportunity. 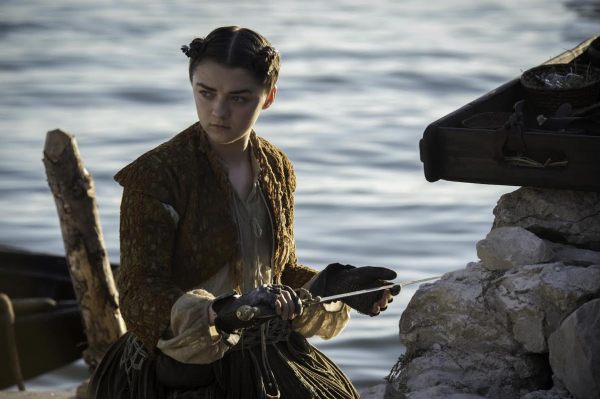 Arya is not about that life: Maybe she wants to be a faceless assassin because it’s cool? Or because there is no Playstation to keep her busy? Either way, we know now that she is not anywhere near ready to become Nobody. All it took was for her to see Meryn Trant and her Assassin’s Creed quest was put on hold. Her hit list has been pretty much narrowed down to him and Cersei, so I suspect she’s gonna have fun torturing Trant if Jaqen H’ghar can’t put a cork in it.

What did the five fingers say to the face: Suhhh-LAP! One of my favorite moments in the episode was when the Sand Snakes were playing the slapping game in their cell. Tyene is losing badly to her older sister, Nymeria (who I just realized shares a name with Arya’s estranged direwolf), but smooth-talks her way into winning. And when it’s Tyene’s turn? IMP SLAP! This was perhaps the only feel-good moment in the entire episode.

Court of Harpies: Things are NOT alright in Meereen. Looks like the short-lived days of political banter with Dany and Tyrion are over. I would say that the chilling image of the camera panning the full crowd of Harpies is on the same level as when the dead were raised at the end of “Hardhome.” This show’s use of silence is exquisitely-timed. The chaos that ensued was a completely one-sided battle, an under-handed approach from the cowardly Sons of the Harpy. We also got to see Tyrion show off those legendary fighting skills and save Missandei. He’s just killing it this season. Drogon showing up was also magnificent. 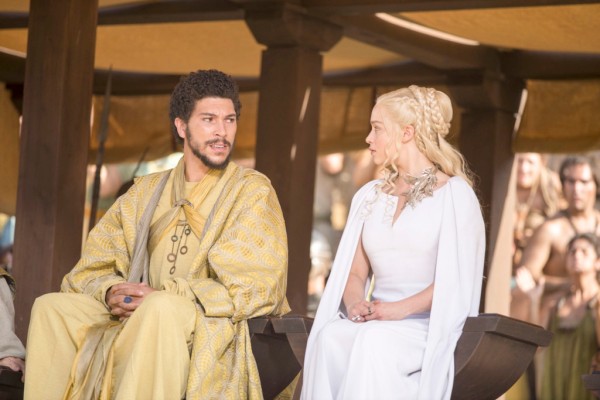 It must suck to be Davos: For a smuggler, this guy has more loyalty than anybody else on the show not named Jorah. He’s following Stannis into a deep, dark hole – which at this point might just be his own ass. He’s sent off to Castle Black to get more men and supplies, where he’s likely to be told to piss off after Jon Snow brought home a horde of Wildlings. He has to say goodbye to Shireen in the most horrible way. What’s stopping him from just hanging out at Castle Black and fighting zombies? Sounds better than being Stannis’ right-hand man.

Ellaria is a giant wet blanket: I’m tired of this lady’s shit. Who is inviting her? She can’t keep her stupid mouth shut for 10 seconds without cutting people down. There’s no way this is the same person who Oberyn was in love with… Man, I miss that guy. On the flip side, I think Doran is an incredibly cunning and strategic ruler. I hope that we get to see more of him soon. I find it hard to believe Game of Thrones‘ time in Dorne is so short-lived, but you never know. 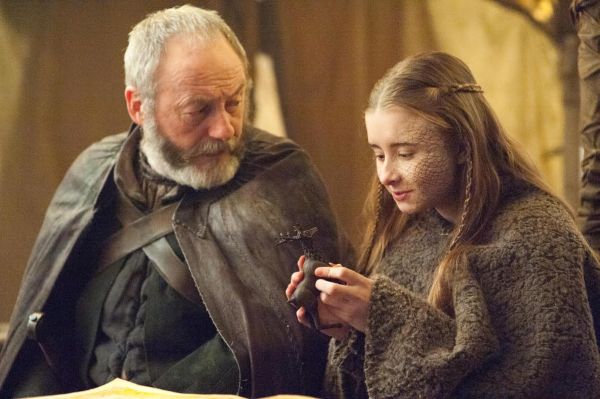 Let’s talk about distastefulness: It’s not like Meryn Trant was a difficult guy to hate already, but now we can add pedophilia to his list of disgusting habits. The only good part about this is that it will likely end with Meryn getting his balls chopped off if Arya can manage it. That, I’d be okay with. And Stannis? Fuck Stannis. I can’t really describe how shitty this made me feel. Stannis’ cold act made him easily the most hated character on the show. Worse than Ramsay, worse than Meryn, 100x worse than Cersei. I don’t understand how we could get such a rare, loving moment out of Stannis early on, and then this happens. I feel gross for even having watched that. Is Stannis becoming The Mad King 2.0? Whatever it was, this episode showed a lot of things that just disgusted me.

Get those Unsullied some Redshirts: The man who sold the Unsullied to Daenerys could have made a killing as a used car salesmen, because it seems like Dany got a straight-up lemon out of this deal. These guys suck at fighting. Trained from childhood to not feel pain, my ass. Were they actually trained how to fight?

Atreyu!!: Drogon showing up and roasting the Harpies was great, but The poor CGI used to show her riding Drogon was so distracting. It almost ruined the moment for me, and looked much more like Atreyu riding Falcor in The Never Ending Story than a Khaleesi riding her dragon. It seemed like all of this happened while Harpies were sporadically tossing javelins at Drogon. And what the hell happens with the rest of her people? She just left them in the arena.

“The Dance of Dragons”: This story, often referred to in this episode is about a Targaryen civil war between Aegon II and his half-sister, Rhaenyra. This war killed off many of the world’s remaining dragons, ending with Aegon II feeding Rhaenyra to his dragon while her son watched on. He died a few months later due to his injuries. It’s a bit reminiscent of Stannis’ decision to murder Renly, and is a fitting story to tell about what happens when Stannis chases his dumbass destiny.

Mace Tyrell is a tool: God, rich people with money have no damn shame. He is such a bumbling idiot, singing and bribing an laughing at his own shitty jokes.

Jaime’s Hulk hand: I couldn’t help but notice how ridiculously large and gaudy Jaime’s fake hand is. There’s a new cosplay idea for next year’s Denver Comic Con – take a Hulk hand and paint it gold.

Harpy man: You ain’t foolin NOONE, Hizdahr. Dany’s fake husband has got to be some underground leader of the Sons of the Harpy. The guy shows up late, giving that shitty smug smile the entire time. Then he just so happens to be the first one down with a knife wound… I’ve seen Scream. I know how this works.

The fighting pit: Let’s talk about this big guy’s Final Fantasy sword. It’s awesome. Oh, and that wrap-around dragon necklace Dany is rockin? It’s also awesome. Moving along, I personally loved the conversation between Daario and Hizdahr. Those guys hate each other, but their banter is always entertaining. Most frightening to me is how clever Hizdahr is when he speaks to Dany. Even Tyrion deflects the conversation when he has nothing to retort with, and that is scary to think about. Tyrion sees right through his fancy pants B.S., but he doesn’t quite know how to put him in his place yet – or at least that’s how it seems.

Greyscale: I don’t really understand how it works, but doesn’t Jorah touching her bare hand mean that she’s in risk of getting it? 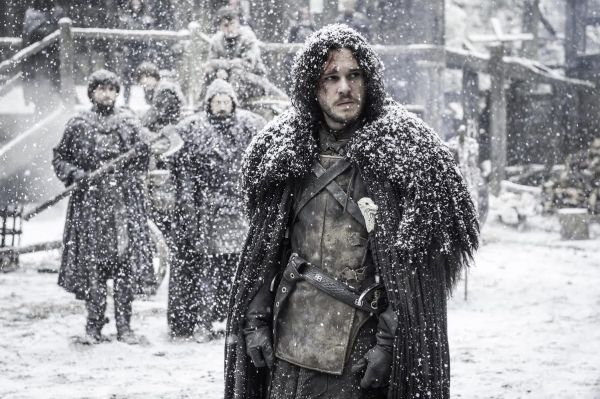 “You didn’t fail him. Or him. Or her. Every one of them is alive because of you, and noone else.” – Samwell Tarly

“The Tyrells can all rot in hell. Treasonous cunts.” – Meryn Trant on his thoughts about the Tyrells.

“There’s always been more than enough death in the world for my taste. I can do without it in my leisure time.” – Tyrion, right before there’s a bunch of death in his leisure time

“In my experience, eloquent men are right every bit as often as imbeciles.” – Tyrion Lannister

I really don’t know. Sansa wasn’t getting raped and beaten for a night, so she’s probably the closest thing to a winner this episode as anybody. Pretty much anybody who wasn’t in this episode walked away “winning.” Littlefinger is likely doing well after the creeper kiss with Sansa. Even little bitch-boy Robin Arryn probably had a better time than these poor saps.

Hush Comics gives “The Dance of Dragons” an C+ because even though it had some of the show’s most distasteful scenes, there was a lot to think about after it was over – like what the hell is going to happen to Tyrion, Jorah, Daario and Missandei…