In 2015, we will see the return of: Mad Max, Poltergeist, Jurassic Park, Terminator, Creed (a Rocky sequel), and Star Wars. With so much stock in retro stories and reboots, it’s easy to forget just what year it is, and while so many of these franchises are attempting to start over and appeal to the masses, Mad Max: Fury Road stays true to its roots. Whether or not that’s a positive description is really up to you as a viewer. George Miller’s fourth installment of Mad Max is somewhere in between a relaunch and a remake mishmash of the last two films, and it’s undeniably the best movie in the franchise. The good news is that you don’t have to see any of the old movies (we suffered for you in our new feature editorial, “Binge and Purge“) to understand what’s going on, as you get all the prologue you need in Max’s opening monologue. 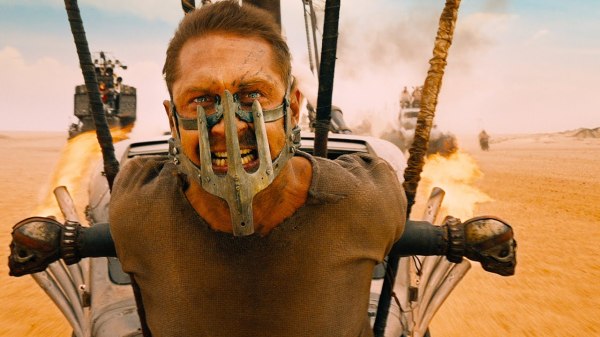 That isn’t too high of a compliment, though, to be honest. There’s no denying that the effects are turned up a notch, that the scale is much grander than the first three, and that the music is some of the most form-fitting I’ve seen in a movie (I’d put it just under Interstellar in the best use of music in a movie this generation). The signature fast-motion fight scenes and race/fights are spectacular to watch, even if they are the most nonsensical bologna I’ve ever seen. There’s even a bit of character development, something the original trilogy was completely devoid of. That’s not to say at all that there shouldn’t have been more. Several issues that rendered the first three nearly unenjoyable were glaring in a 2015 version that should have been up to date.

There was an awkward amount of missing dialogue in the film. It’s not that people needed to be talking all the time, but a little background to satisfy the underwhelming backstory would have been appreciated. What made the lack of backstory so frustrating was that, in each of the four films, I was left begging to know what the hell was going on. There was a perfect opportunity for set up in every movie, and it was squandered in favor of explosions, primal screaming, or awkward shocked glances to the fourth wall. We get the vibe that all the Lost Kids were killed, and that it was Max’s fault, but we don’t ever find out any specifics.

The return of Hugh Keays-Byrne was a sentimental one, as he is the same actor who played Toecutter in the first film, but there wasn’t really any depth to him other than he likes getting sexy chicks pregnant. Even Tom Hardy, who was the reason many were drawn to see the movie, was boring, flat and hardly even in the whole film. To be fair, Mel Gibson wasn’t really magnetic or anything, nor was he ever the star of his own films (Max was always the “strong, silent” type), but I was expecting this level of dryness from the guy who played The Forger in Inception. The jury is still out on whether or not we should cheer for this protagonist, who would have readily left a group of women out to dry had it not been for a crafty Furiosa.

It was Furiosa who really starred in the film, and they added more to the film than just comic relief – as Max’s companions Goos and the Gyro Captain were. Furiosa (Theron) is a badass warrior with one arm who gives Max a run for his money in a fisticuffs battle. From the start, we know she’s a rogue of Immortan Joe’s empire, but the way she looks out for her girls shows her willingness to redeem her past mistakes. She’s the reason these dumbass male right’s activists (I just found out MRAs are a thing) are boycotting the movie. Please, if you want to see old white guys circle-jerk each other with explosives, go see the Expendables.

On the other hand, there is Nux, one of the ghost-like junkies (who all look an awful lot like the “I Like Turtles” kid in Beyond Thunderdome) who is bred to think going to Valhalla (a majestic heaven for dead warriors in Norse mythology). but ends up going the good guys after realizing the team he’s playing for is evil. It’s not very deep, but the shallowness of the rest of the film helps these two stand out among the rest.

I get it. That’s not why you go to the theater to watch Mad Max. There’s a reason this franchise died in the 80’s, and it wasn’t just 9/11. Since Mad Max 3: Beyond Thunderdome, movies about a dystopian future have been the norm. Heck, pretty much every young adult franchise takes place in some messed up future or another. Fury Road was a step towards what fans want out of the insane series, kicking up the violence and race scenes a few notches, but it’s still a far cry from what it could be if Miller and the other writers spent more time on developing their world. After four movies, I understand less about the Mad Max world and the characters in it than I did in the mediocre Book of Eli.

If Mad Max really wants to keep up with the times, then it needs to start developing the environment as its own character. Brevity has not been kind to a world that has so much more to explore than the crazy asshole who reside in it. Take some notes from games like Fallout 3 on how to set the environment appropriately and use the irradiated future to show us how it all went wrong. Dystopian futures are supposed to be a darker reflection of current times, and that needs to be more than just explosions and firefights. Unless, you know, that’s all you want out of your movie-going experience.