This week’s The Flash brought out a lot of revelations, redeemed characters that were annoying in the past, and gave us a pretty cool villain. There were more pros than cons. Let’s jump to it!

Caitlin’s turn around: I like that Caitlin was opposing the investigation into Wells’ life. It makes sense because she hasn’t experience anything weird with him yet. All she has seen is his benevolent side. At the end when they find Harrison’s room, she starts to change her mind. I like progression with characters and not just following because Barry says so.

Iris and Eddie: This week I wasn’t so annoyed by the troubled couple. Eddie even cut her down a little, with the reply of major side eye from his gal. After Eddie is in holding and then found innocent, Iris seems happy that he is ok. He finally admits he is working with The Flash. Hopefully she doesn’t use this against him in the future, but for now, they seem to be ok.

Wells’ interest in Hannibal Bates: Two things about this. It was a good move to mention that if Hannibal Bates touches Barry, he could gain Barry’s powers. Wells also seemed really excited to catch Mr. Bates. At first I thought it was because Wells likes the idea of shapeshifting (which I’m sure adds to it) But then I realized that his true interest is in Eddie Thawne. Eobard Thawne can’t exist without Eddie, and if Eddie is in prison, then Eobard doesn’t have a “future” to go to. Ta da!

Joe and Cisco in Starling City: Joe and Cisco take the trip to Starling to the site of the Harrison Wells car accident. Along the way, Cisco becomes smitten with Laurel, especially after she admits she is the Black Canary. He makes her the Canary Cry choker, and in the ultimate fanboy moment of the show she gives him a picture of the two of them in return. Joe and Quentin have a heart-to-heart about daughters, making Joe really likeable and at the same time, maybe repairing Laurel and Quentin’s relationship. They also realize there are bits of time-travel in the air, causing Quentin’s coffee to fly, and then they find Harrison Wells’ real body. In all, it was a very productive part of the story, and considering the matter of why they were there, the funniest too. 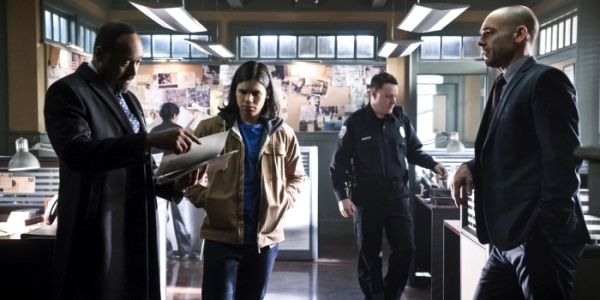 First meeting with Hannibal Bates: This was one of the stand out scenes from this episode, so I felt it warranted it’s own section. It was pretty obvious that the grandma was actually Bates. And for a brief second, she did touch Eddie’s shoulder when he and Barry came into the house. When he ran and Barry didn’t know how to catch him, Harrison told him to do it the old-fashioned way; run like a normal person. This struck me so funny. But the shock was when the shapeshifter turned into Eddie and shot the cops. It was one of the first times in the show where I absolutely didn’t not see that coming, and was really impressed with how it was carried out.

Eddie being the bigger person: Even though he had the opportunity to get out of his terrible predicament by just having Barry whisk him away, Eddie tells Barry that they have to do this the right way. It really showed that Eddie is not the bad guy in this show.

Iris getting a little smarter: Iris may be late, but she if figuring everything out. It is a matter of time before she figures out Barry is The Flash. She already knows that Caitlin has something to do with the “burning man.” I enjoy it when women have brains!

Harrison and Joe’s chat: This talk was rife with undertones. They both know some truths about the other one, and they both know this. But they also were able to talk about their dead wives to cover it all up. I mostly enjoyed the long shots here.

The damning final scene: I don’t know how Harrison is anything but screwed now. Barry, Caitlin, and Cisco find the Reverse Flash suit and the newspaper from the future. It’s all coming really fast (get it, because it’s The Flash?).

Underestimating the Enemy: So many times in this episode the “heroes” underestimated the enemy. This was a week that Oliver Queen needed to show up and provide some tips. Central City may be the fun and lighthearted one, but they need to be a little more street-smart if they are going to get by. Cases in point: Barry talks to Caitlin about evil Dr. Wells inside of Dr. Wells’ lab, Barry thinking that Eddie is really showing up at his door after he was just in a holding room at the police department, Caitlin thinking that Barry would be suave and brave enough to kiss her, Iris and Caitlin not locking the car doors so that way construction workers can let out the shapeshifter, and Barry fighting the shapeshifter at the airport and dropping his guard when he shifts into Caitlin or Iris. Dumb.

Coast City: Another reference to Hal Jordan’s Coast City in this episode. Barry runs to the neighboring town to grab the gang pizza. And the scenery in Coast City far out does Central City and Starling City. I wish we could get a spin-off set there.

Hannibal Bates, Everyman: Caitlin finally got to name one this week! Everyman, Hannibal Bates, or the Shapeshifter was part of Lex Luthor’s Everyman Project. This Everyman had to eat people in order to shift into them. Ew.

Eobard Thawne already knows: He knows what is going on with Joe and Cisco in Starling City. He probably already knows that the body of Harrison Wells is there. I just don’t know what that means for our team.

Hush Comics gives “Who Is Harrison Wells?” a B+ for adding a level of depth not seen before, still being “light”, but for some of the dumb things characters did when faced with the enemy.