Bruce and Selena weren’t totally terrible this week: While there were things this story line that made me roll my eyes so hard it hurt, the two actually were pretty brave to steal the key from Bunderslaw. It was cool to see them playing spy. I have been a fan of Bruce from the beginning, but Selena is starting to grow on me. And her line about the “kinda crappy” drawing of The Ogre had me laughing really hard. That hasn’t happened to me during this show before in a genuine way.

Mr. Nygma makes his move: I should have seen the foreshadowing when Nygma went all Gallagher on the watermelon at the beginning of the episode. While it was slightly shocking that he killed the cop who abused Miss Kringle, it was even more shocking at how delighted he was to continue stabbing the guy. And yet, it made me feel good. Don’t read too much into that.

Leslie is still the strongest female on the show: Leslie heard noises, got creeped, and then found out her cat is a mischief. And then when Jim came up RIGHT BEHIND HER (who does that when there is a serial killer on the loose?!), she clocked him in the head with a telephone receiver. He totally deserved that. Then when he tells her to leave Gotham (tonight… see cons for more on this), she says no. You tell him, girl!

The Ogre: Ugh. I hate to say it, but this is the best thing to happen to the show. An ongoing story of going after one serial killer is a great modern way to tell a story about crime. He is a great antagonist. He is charming yet terrifying. His backstory is more interesting than any other character’s thus far. All of it is new material, and considering the bad writing on the rest of the show, this one is really holding it’s own. The introduction of other “old” Gotham families and their dark pasts is really grabbing at me. And if he didn’t kill people, he wouldn’t be that bad of a guy. He paid 10,000 dollars to charity just to see Barbara. That’s pretty sweet. Right? 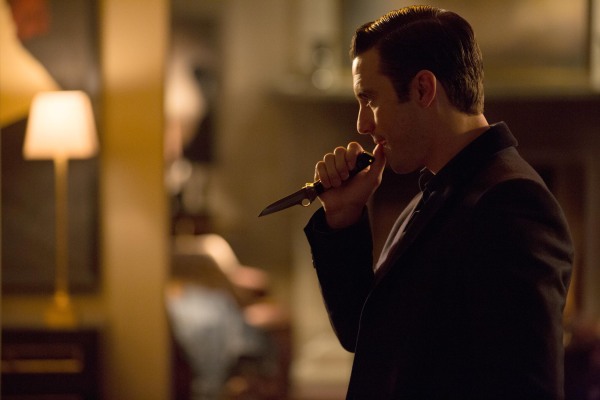 Gordon speaking out: Gordon calling the media and outing The Ogre may not be the smartest move, but it was brave. In a way, he was standing up more to the GCPD than he was to the killer. I liked it.

Bruce and Selena may be good, but the writing here is terrible: From the overbearing “bom, bom, bom” music to the fact that there is no way Bunderslaw keeps his safe key in his tuxedo pocket, most of this part of the episode was cringe worthy. Also, the two kids yelling at each other for no reason was hard on my old lady ears.

Leave Gotham. Tonight.: This is a common statement in the show, but I noticed it tonight more so, and it bothered me. I don’t know about you, but it isn’t easy for me to pack all my belongings, say goodbye to everyone I love, and book a flight out of town all in a night. This is such a silly statement.

Barbara: She really knows how to attract a serial killer doesn’t she? My favorite line was when she said, “If I was hit by a bus, no one would miss me.” I’m pretty sure in the handbook of serial killers, that is one of the best things they can hear. Because you know, no one will think about them being gone. Also, her being turned on by the 50 Shades of KILL MURDER DIE room was a little creepy. Like creepier than doing the killing and murdering.

Penguin/Knife-Gun Guy/Maroni/Penguin’s mom: While I still really enjoy Robin Lord Taylor as an actor, I found this section of the episode to be a bunch of inane filler. Penguin hiring a guy, aka Knife-Gun Guy, to kill Maroni had nothing to do with the rest of the plot and was a lame motivational speech at that. And Maroni flirting with Mama Cobblepot was hard to watch. Both characterizations were terribly portrayed, and the writing was just as bad. I hated pretty much every one of these scenes. The cherry on top was Penguin killing the flower delivery boy to send a message… unless that flower delivery boy actually worked for Maroni, this is just a senseless murder. And his mom is really dumb about the whole thing. Over. It.

Captain Essen: I am under the impression that a police Captain’s job is to give direction to his/her staff when needed. But this lady asks what Gordon’s next move is and how they can stop The Ogre from acting again. Should she be answering the questions and not asking them?

The “before” picture: The before picture the plastic surgeon had of The Ogre was hilarious. Milo Ventimiglia with photoshopped boils on his face is just not that scary.

Was it necessary to kill people?: Bruce asks Alfred this about his days in the army. This question continues to establish the values that Batman holds dear.

It’s a Charity Ball!: Bruce is insistent that nothing bad can happen to him at the Wayne Enterprises Charity Ball. I don’t know if this is a direct reference, but Charity Balls have never been the safe haven in Batman lore i.e.: Batman Returns and The Dark Knight. Good thing it was ok this time!

88th and Grant: Again, I don’t know if this was on purpose, but could the cross streets be a reference to long time Batman writer Grant Morrison?

Fish Mooney will die two weeks later: Fish wasn’t in this episode. Perhaps she will die next week?!

I may actually enjoy next week’s ep: When they showed Bruce discovering the fake walls in the library, I freaked out! Do we get a glimpse of the Batcave? Let’s hope!

Hush Comics gives “Under the Knife” a B for the continuing serial killer story line, the depth of Gotham’s old money, and Riddler’s big moment, but for some silly moments throughout.

All images belong to FOX and DC Entertainment. They are credited to Jessica Miglio.